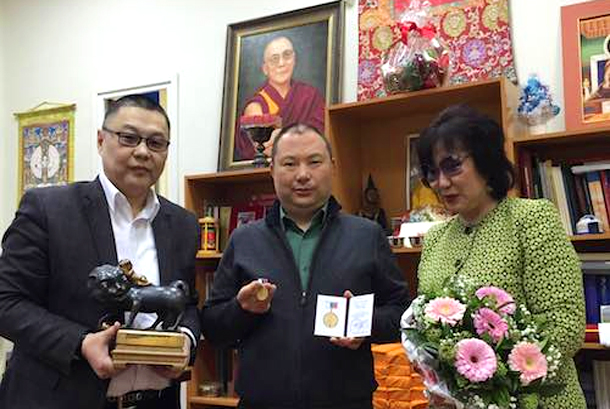 Moscow — The spiritual leader of Tibet, His Holiness the Dalai Lama was recently honoured with an award for his outstanding contribution to the development of Tibetan Medicine. The award was presented by Dugarov Bilikto, Director General of LLC Green Lotus, Moscow, through the Office of Tibet based in Russia.

The silver medal is gold plated and adorned with a Russian flag and an image of Medicine Buddha in the middle. The statue was commissioned by world renowned Buryat sculptor Dashi Namdakov titled "The Little Buddha" symbolising His Holiness the Dalai lama as a young child riding the snow lion, which reflects the bond between His Holiness the Dalai Lama and the land of the snow.

Due to certain circumstances the doctors of the Russian Medical centre were not able to make the visit to India to personally present the award to His Holiness. As a result, they have decided to present the award through Honorary Representative Telo Tulku Rinpoche at the Moscow based Office of Tibet.

"Mentsekhang has sent Tibetan doctors to Russia for many years to offer not only consultations for patients but for offering lecture, workshops and seminars as well in the Russian Federation" Says Telo Tulku Rinpoche "The people of Tibet and Russia share many centuries link through Buddhism in the field of Religion, science and Philosophy."

"We are glad to be part of Russia revival, restoration and reintroduction to the Rich cultural heritage which was destroyed during the Communist regime and now Tibet in return is going through tremendous amount pain suffering just like the Russian people have gone through in the mid-20th century. We have every Moral responsibility to Support the Tibetan people and be the back bone of Tibet," said Telo Tulku Rinpoche.