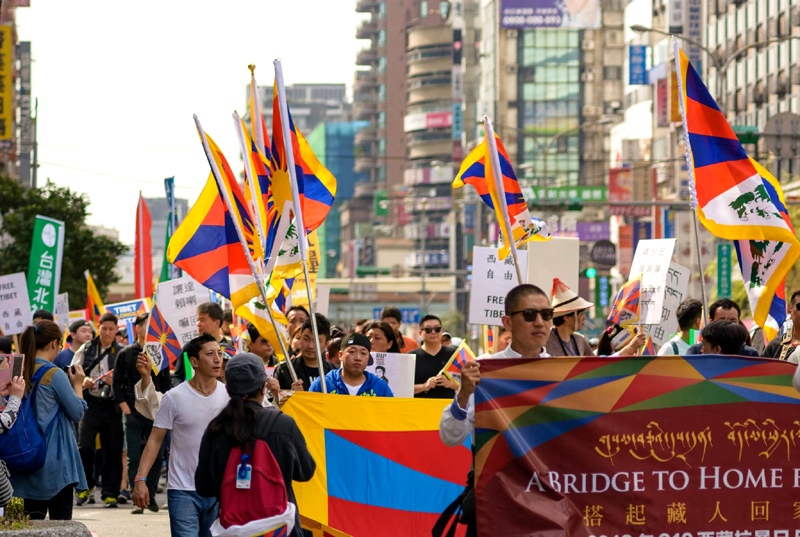 Taipei, March , 2016 — Hundreds of Tibetans and Taiwanese supporters from more 20 civic groups and lawmakers marched through downtown Taipei, on Sunday, in a call to free Tibet and uphold human rights in Tibet, to mark the 57th anniversary of Tibetan national Uprising Day, protest against the occupation of Tibet in 1959.

Members of the Welfare Society for Tibetans in Taiwan, Human Rights Network for Tibet and Taiwan, Taiwan Association for Human Rights and other groups gathered in front of Pacific Sogo's Zhongxiao E Road department store for a rally before setting off on the march, with numerous speeches by legislators expressing solidarity with the Tibetan cause.

New Power Party (NPP) Legislator Freddy Lim called for President Ma Ying-jeou and president-elect Tsai Ing-wen to allow the Dalai Lama to visit Taiwan. "President Ma has said many times that cross-strait relations have never been better, so I cannot think of a better time," Lim said, adding that the president has cited a need to repair cross-strait ties in denying previous visits.

Democratic Progressive Party (DPP) Legislator Tsai Yi-yu said that Tibet should serve as a "warning" of what might happen to Taiwan, calling for the Executive Yuan's Mongolian and Tibetan Affairs Commission to be frozen to express solidarity with the Tibetan cause, the Taipei Times reported.

"The function of the commission is not clear and it looks like a deformity even when run by the Republic of China, because Mongolia does not belong to China anymore. That we still use the 'Republic of China' framework to lay claim to Tibet is at odds with their struggle for human rights and freedom," Tsai Yi-yu said, adding that he would propose a refugee act to allow Tibetan exiles to be granted asylum.

Tibetans "are like China's indigenous people, so we feel for them and should support them both in spirit and politically," Kolas said, adding that Aborigines and Tibetans desire true autonomy to protect their cultures.

"We were both originally independent nations, but have been losing our political systems, social structures, religious beliefs and languages ever since colonizing powers came," she said.

The group sang the Tibetan national anthem, while Tibetan monks prayed for a long life for His Holiness the Dalai Lama before they marched away to chants of "Free Tibet" and "Long Live the Dalai Lama."

A large portrait of the spiritual leader of Tibet led the procession, followed by more than a dozen Tibetans waving large national flags of Tibet.

The group marched to the Kelti Building, which is often used to symbolize the Chinese government in the absence of a formal representative office, as it houses the offices of the Cross-Strait Economic and Cultural Interchange Association, the Bank of China and other Chinese associations and firms.

The group held a "die-in," sprawling on the road in front of the Kelti Building in solidarity with Tibetan monks who have self-immolated to protest Chinese rule of Tibet. The crowd marched to Taipei 101, saying they wanted to share their message with Chinese tourists.

Tibet was invaded by 35,000 Chinese troops who systematically raped, tortured and murdered an estimated 1.2 million Tibetans, one-fifth of the country's population. Since then over 6000 monasteries have been destroyed, and thousands of Tibetans have been imprisoned. According to various sources, it is estimated that up to 260,000 Tibetan people died in prisons and labor camps between 1950 and 1984.