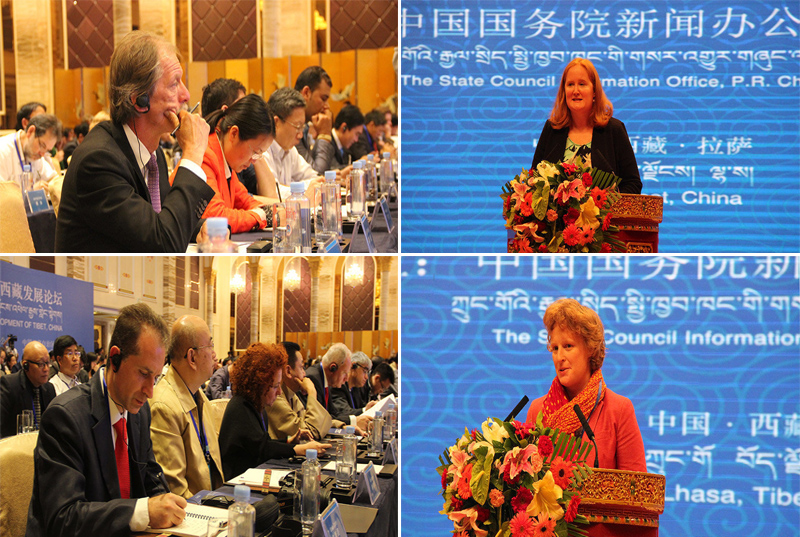 Dharamshala — The 'Development Forum' held in Lhasa from 7th-8th of July 2016 resulted in a 'Lhasa Consensus' document once again, this time in the panorama of apparent stimulation of sustainable development and the betterment of Tibet environmentally as well as economically. More than 130 researchers, officials and correspondents from over 30 countries reportedly participated in this event.

The content of the Lhasa Consensus talks about policies aimed at the conservation of the Tibetan plateau where China is building dams on all the major rivers and using up the mineral resources to employ as assets. Other policies have consequences such as displacing the nomadic pastoralists which has shown to have ill effects on the health of the rangeland and harmful for the climate.

Apart from the documents artful wording the concern is drawn to the issue of controlled media and inability of independent organizations or individuals to examine the area. This was made evident when Michael Brand, a German lawmaker who chairs the Bundestag's Human Rights Committee, was refused to enter China in May after he criticized rights violations in Tibet.

The International Campaign for Tibet, a U.S.-based NGO's president Matteo Mecacci criticized the consensus saying, "The organization of international gatherings by authoritarian governments to gain legitimacy abroad is not a new effort and is a worrying trend aimed at stifling and isolating local dissenting views in many countries. The participation of individuals representing international organizations in such events needs to be scrutinized, since it fosters the regimes' propaganda."

"In the case of Tibet, it is astonishing that foreign individuals representing respectable institutions would endorse Beijing propaganda, while hundreds of Tibetan political prisoners are still in jail for expressing their views and while Tibet continues to be practically sealed off to all independent observers and institutions, such as UN rapporteurs and major international NGOs. Beijing has the economic might to recruit foreign endorsements to its propaganda, it is therefore up to democratic governments, free press, think tanks, NGOs and academics to make sure that the integrity of an open, transparent and democratic debate is preserved when issues concerning the lives of millions of people are discussed."

"Participating in 'Potemkin tours' and failing to raise questions publicly about the information regularly produced by independent observers does not contribute to the credibility of such participants or their institutions."

A similar document like this was produced in 2014, which attacked His Holiness the Dalai Lama for promoting a distorted view of Tibet to the world. In 2014, not most western attendees were happy with this document. In a statement, the former mayor of Christchurch, New Zealand, Sir Bob Parker said that he was not happy to be associated with the document.

A UK-based group called Free Tibet's director remarked, "The statement issued at the end of this event makes clear that the whole thing was an utterly cynical exercise in propaganda which Western participants blindly or willingly allowed themselves to become part of." The Tibetan National Congress (TNC) had also expressed their concern over the far and wide participation of the international community in this propaganda. After the conspicuous arrangement in the previous document, the credibility of the one circulated this year is also questionable.