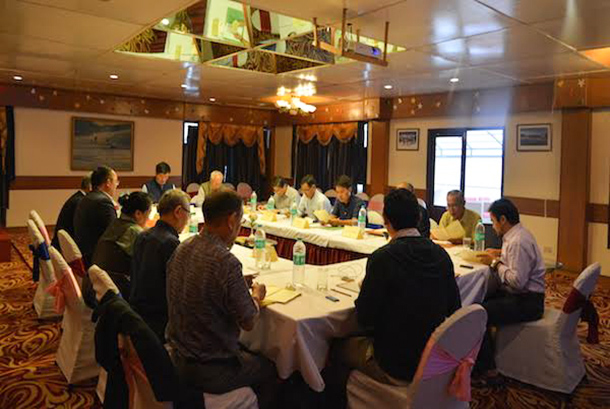 Dharmashala, July 16, 2016 — A two-day meeting of the Task Force on Sino-Tibetan Negotiations held in Dharamshala, India, with a very strong commitment for peaceful resolutions to the issue of Tibet through dialogue with the Chinese government.

The meeting... "had candid discussion on the political developments in China, on issues relating to the future of dialogue with the PRC leadership, and on developments in the international political landscape," the the task force said in a statement issued on Saturday, July 16, 2016.

Sikyong Dr Lobsang Sangay, who chaired the meeting, reiterated "the Tibetan leadership's commitment for the peaceful resolution of the Tibetan issue through dialogue."

"The Tibetan leadership remains firmly committed to the Middle Way Approach, and strongly believes that only way to resolve the issue of Tibet is through dialogue," it added.

This is the 28th Task Force meeting since its inception and 6th meeting since His Holiness the Dalai Lama formally announced or handed over all his political responsibilities to an elected Tibetan leadership, ending the four-century tradition of Tibet's political and spiritual leadership by the Dalai Lamas. Since then four meetings were held in October 2011, June 2012, January 2013 and January 2015.

In its 2015 white paper, Beijing again rejected a "middle way" approach, advocated by His Holiness the Dalai Lama, to peacefully resolve the issue of Tibet and to bring about stability and co-existence between peoples based on equality and mutual co-operation.

"The Middle Way Approach, neither seeks "Greater Tibet" nor a "high degree of autonomy", but genuine autonomy for all Tibetan people under a single administration. This is consistent with both the National Regional Autonomy Law and the Constitution of the People's Republic of China," Dr Sangay however said in his statement issued in 2014.

Dr Sangay, who chaired the last five meetings, repeatedly stated that representatives of His Holiness the Dalai Lama are "ready to engage in meaningful dialogue with the Chinese Government anywhere and at anytime."

Dr Sangay was re-elected as Sikyong, political head of the Central Tibetan Administration (CTA) for a second consecutive term. This year general election was the second election since His Holiness the Dalai Lama had stepped down as head of the CTA in 2011 to focus on his role as the spiritual leader of Tibet and Tibetan people.

The CTA says "the Task Force on Sino-Tibetan Negotiations was constituted to help recommend policy matters and strategies to find a peaceful and mutually acceptable negotiated resolution to the issue of Tibet." The first Task Force meeting was held in 1999.