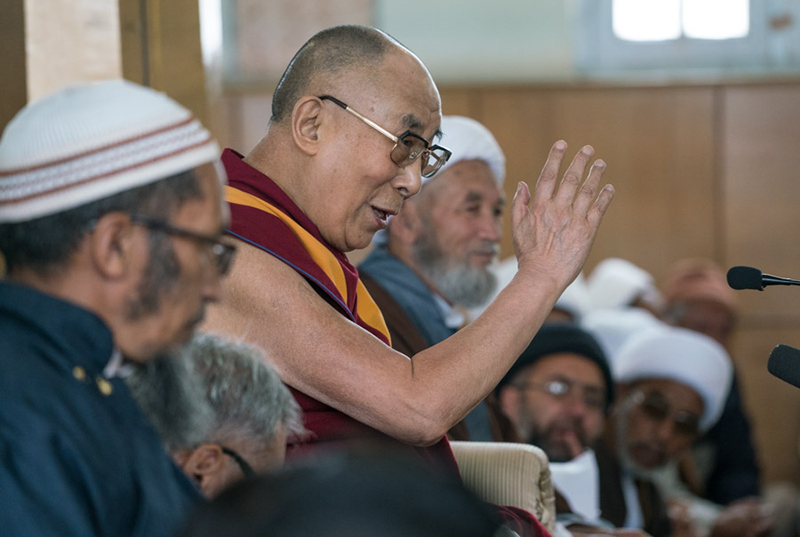 Leh, Ladakh — "All seven billion human beings in the world wanted happiness. In this regard, all major world religions emphasized the practice of love compassion, forgiveness and tolerance," The spiritual leader of Tibet, His Holiness the Dalai Lama said, adding that "Religion should not be a source of division and conflict."

The Tibetan spiritual leader who always stresses upon to promote values and religious harmony, made the last leg of his pilgrimage, visiting the Shia Mosque where he was received by the President of the Shia community and a number of Shia clerics. Besides members of the Shia community, representatives from the Sunni and Buddhist communities also joined the gathering on July 27, in the Mosque in Leh, Ladakh, J&K, India, according to the office of His Holiness the Dalai Lama.

In his remarks to both the communities, His Holiness related how during the Fifth Dalai Lama's time, land was given to a group of Ladakhi Muslim traders for them to build a mosque. This marked the establishment of the Tibetan Muslim community.

Since then, at all Tibetan government functions representatives of the Tibetan Muslim community participated. They were a very religious community characterized by their gentleness and peacefulness. There were no records of quarrel among them. They always had beautiful stories to share. They were true followers of Islam.

His Holiness then reflected how in the past there was immense suffering as a result of World War 1 and 2. Many people were killed. Now at this very moment, on this same planet, there are thousands of people being killed and many facing starvation. However, His Holiness was encouraged to learn from scientists that basic human nature was compassionate. If basic human nature were destructive then there would be no use in trying to promote compassion but this was not the case.

His Holiness stressed that all seven billion human beings in the world wanted happiness. In this regard, all major world religions emphasized the practice of love compassion, forgiveness and tolerance. Religion should not be a source of division and conflict. It was important to remember the concept of one truth, one religion on the level of an individual. And several truths, several religions on the level of the community.

He went on to explain that the Middle East had Judaism, Christianity, and Islam, which came from the same Abrahamic family of religions. India had Sankhya, Hinduism, Jain and Buddhism. Different philosophies were simply different methods to bring conviction about the importance of love. Each had their own powerful ways to practice love.

Touching on conflict within the Muslim community, His Holiness said, "It is very unfortunate to see that in many Muslim countries there is conflict between Shias and Sunnis. This is very sad, especially since religion was the source of this conflict. It is important to remember that Shias and Sunnis are followers of the same Prophet Muhammad. Both study the Koran and pray five times a day. They should put aside their small differences and remember that they are practitioners of the same faith".

The nobel peace prize laureate pointed out how unfortunate it was these days that many terrorist attacks were being blamed on the Muslim community. He emphasized the need for all of us to change this kind of attitude. There will always be mischievous people in every community, whether Buddhist, Jewish, Christian or Muslim.

His Holiness stated that we must be careful and not use the term Muslim terrorist or Buddhist terrorist. Once a believer commits an act of terror he or she is no longer a true practitioner of their faith. In explaining to His Holiness the term 'jihad', a Muslim cleric defined it as combating one's destructive emotions, not harming other people. So there was sufficient reason to explain that practitioners of Islam were practitioners of love.

On his part, His Holiness said that he has been making efforts since September 11 in defending Islam and explaining that Islam is an important religion of the world. The essence of Islam was the practice of love.