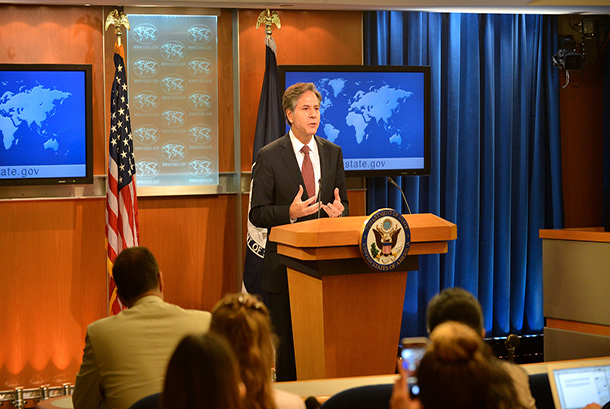 Dharamshala — The 2015 annual report of the US State Department’s International Religious Freedom , released on 10th August, documented a series of continuous cruelty on religious freedom committed by Chinese authorities in Tibet.

The report further assured the sustained and concerted effort of the US government to encourage greater religious freedom in Tibetan areas and reiterated the concerns raised repeatedly by US officials – such as the Chinese government’s refusal to engage in dialogue with the Dalai Lama – in public remarks and with Chinese government counterparts at multiple levels.

During the release of the report, Mr Antony J. Blinken, United States Deputy Secretary of State said: “ the purpose of this annual report is not to lecture; it is to inform, to encourage, and ultimately, to persuade. Bigotry and intolerance can be found in every part of the world, including the United States. But every country has an obligation to respect religious liberty and freedom of conscience; we encourage every country to do so. This report, which is based on a wealth of objective research, is one of many ways we give life to that advocacy.”

The annual report also focused on the atrocities carried out in the name of religion in many parts of the world such as the societal passions associated with blasphemy and the egregious abuse of religious freedom unleashed by non-state actors such as Daesh.

Across the Tibetan Plateau there were reports of death in prison, forced disappearance, physical abuse, long detention and arrest of people due to their religious practice, and restrictions on religious gatherings, according to media reporting and human rights organizations.

Some Tibetans continued to engage in self-immolation practices as a form of protest against Chinese policies. Human rights advocates stated that authorities used intimidation tactics to force agreements with government regulations and to reduce the likelihood of antigovernment demonstrations, succeeding in projecting an image of stability and of having popular support.

Monasteries are constantly being surveyed by Chinese authorities. Police detained anyone who called for freedom, human rights, religious liberty and who expressed support for the Dalai Lama or solidarity with individuals who had committed self-immolation. Restrictions were particularly severe around politically and religiously sensitive anniversaries and events.
Authorities scrutinized and sought to control monastic operations and restricted travel for religious purposes, according to human rights organizations.

Prominent Buddhist bring back lama and political prisoner, Tenzin Delek Rinpoche, died in prison on July 12, after serving 13 years of a life sentence for allegedly setting off explosions and inciting separation of the state, according to CNN. Authorities denied requests from his family to return the body so that traditional Tibetan Buddhist funeral rites could be conducted. Authorities allowed relatives and religious leaders to witness the cremation of his body but later forced family members to return his ashes, according to a exile Tibetan media report.

The Chinese government did not disclose the location of the Panchen Lama, Gedhun Choekyi Nyima, Tibetan Buddhism’s second-most prominent teacher after the Dalai Lama. Chinese authorities detained him in 1995 when he was six years old. His whereabouts remained unknown. In September a Chinese government official publicly stated that the now 26-year-old Gedhun Choekyi Nyima was “living a normal life, growing up healthily, and does not wish to be disturbed.” Authorities ignored requests by international observers to visit Gedun Choekyi Nyima.

The government continued to insist Gyaltsen Norbu, whom it selected in 1995, was the Panchen Lama’s true reincarnation. Gyaltsen Norbu has been appointed to two political positions, as vice president of the Buddhist Association of China and as a member of the National Committee of the Chinese People’s Political Consultative Conference.

According to numerous Tibetan Buddhist monks and scholars in the country, UFWD, and Religious Affairs Bureau officials frequently pressured monks and laypeople, including government officials, to attend sessions presided over by Gyaltsen Norbu. When Gyaltsen Norbu visited Tibetan areas in Yunnan Province in late May, officials reportedly ordered monks and villagers to greet him.

Local authorities prosecuted and imprisoned an unknown number of Tibetans whom authorities said had aided or instigated self-immolations, including family members and friends of the self-immolators, according to press reports. Authorities also reportedly took measures to limit news of self-immolations and other protests from spreading within Tibetan communities and beyond. In numerous cases, officials shut down or restricted local access to the internet and cellular phone services for this purpose, according to reports.