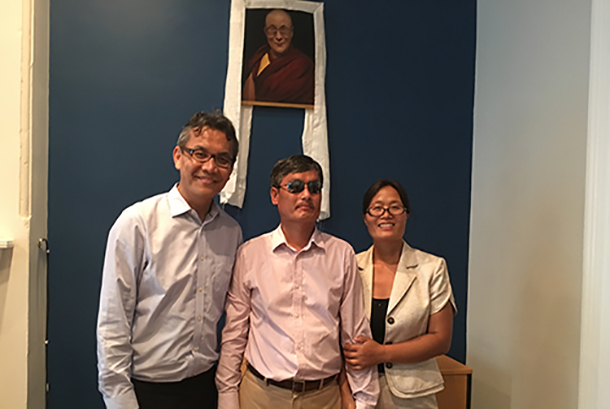 Washington DC — 'Information was strictly censored by the Chinese government, making it very difficult to hear anything about Tibet,' Chen Guangchen, one of the most prominent Chinese human rights activists, said while visiting the Office of Tibet (OOT) in Washington DC on August 9, 2016.

Mr Kaydor Aukartsang, the Representative of His Holiness the Dalai Lama, welcomed Mr Guangchen at the OOT.

Mr Guangchen strongly emphasised the need to maintain continued outreach from the Tibetan people and administration to the Chinese public.

"When I was in China, information was strictly censored by the government, making it very difficult to hear anything about Tibet. And the little we heared were all official propaganda, spewed by the Chinese government machinery. We do not completely believe the official news provided by the government, yet we don't verify it either. As a result, Chinese public's knowledge on Tibet is extremely limited. Therefore, it's really important to reach out to the Chinese public to provide factual information on Tibet," he said.

He also expressed his good fortune to have met His Holiness the Dalai Lama in 2012 and demonstrated a willingness to visit the Central Tibetan Administration based in Dharamshala in the future.

Mr Guangchen is a Chinese civil rights activist who came into international attention for organising a landmark class-action lawsuit against authorities in Linyi, Shandong province, for the excessive enforcement of the one-child policy.