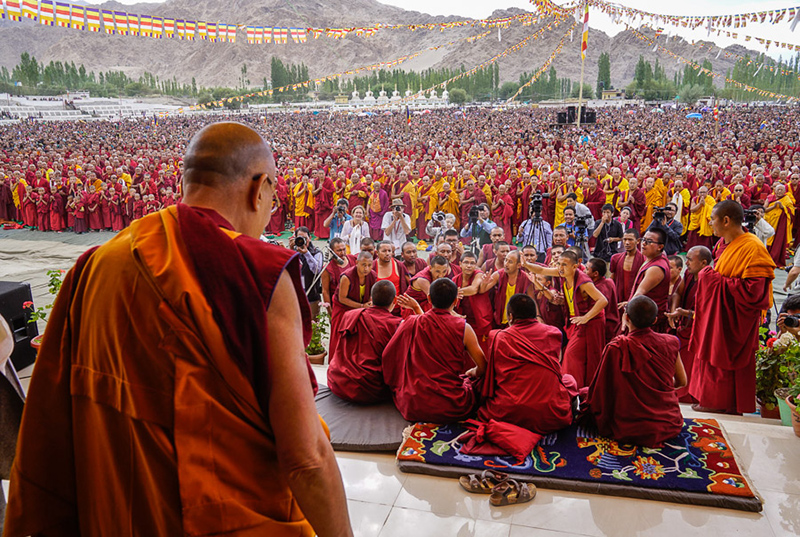 Dharamshala — Describing every sentient being, including animals, and seeking happiness, His Holiness the Dalai Lama said that 'showing others respect and trying to help them solve their problems is a source of happiness.'

Almost 30,000 devotees thronged the Shiwatsel ground to attend teachings by His Holiness the Dalai Lama on Friday, August 19. Four days of teachings, with sessions in the mornings only, have been organized by the Ladakh Buddhist Association of Leh in collaboration with various volunteer organizations.

As a prelude to His Holiness' teachings, monks and scholars from various monasteries participated in formal debates with each other, employing dialectical methods to explore the niceties of the doctrine.

Beginning his explanation of the 8th century CE Nalanda master Shantideva's 'Guide to the Bodhisattva's Way of Life' (Bodhicharyavatara; spyod-jug), His Holiness addressed the congregation on the importance of learning and understanding what the Buddhist scriptures actually teach.

"Faith without understanding the essence of what the Buddha taught is merely maintaining tradition as a kind of social custom," he advised.

"We are not gathered here to witness some sort of performance nor even just to hold a meeting together. We are here to explore the teachings of the Buddha. Therefore, if our endeavours are to be fruitful, both teacher and students must generate a pure motivation. Otherwise we'll just be wasting our time."

The crowd, consisting of Ladakhis, Tibetans, Western devotees and tourists, listened to His Holiness call for harmony between all religious traditions. In discussing the benefits of the awakening mind of bodhichitta, he said it is this spirit of awakening, the aspiration to attain enlightenment to benefit all sentient beings that motivates the Bodhisattva's way of life.

The text he is teaching explains how to cultivate and sustain this altruistic aspiration. There are two aspects to the awakening mind—the aspiration, the wish to awaken and actually engaging in practices that lead to that awakening. These bodhisattva practices are commonly known as the Six Perfections and first among them is the perfection of generosity.

"Every sentient being, including animals, seeks happiness," His Holiness remarked. "Therefore, showing others respect and trying to understand and help them solve their problems is a source of happiness."

"We have two enemies, the self-cherishing or self-centred mind and the misconception of self. Crucial to Buddhism in general, but especially the Nalanda tradition, is the need to use our intelligence and transform our emotions. This will be a far more effective source of happiness than resorting to the short term pleasures of drinking alcohol or taking recreational drugs."

His Holiness highlighted the verse in the first chapter of 'Guide to the Bodhisattva's Way of Life' that describes sentient beings predicament:

Although seeking to avoid pain,
They run headlong into suffering.
They long for happiness, but foolishly
Destroy it, as if it were their enemy

The teachings concluded on August 20. The following day, His Holiness confered the empowerment of Avalokiteshvara—the Bodhisattva embodying compassion.