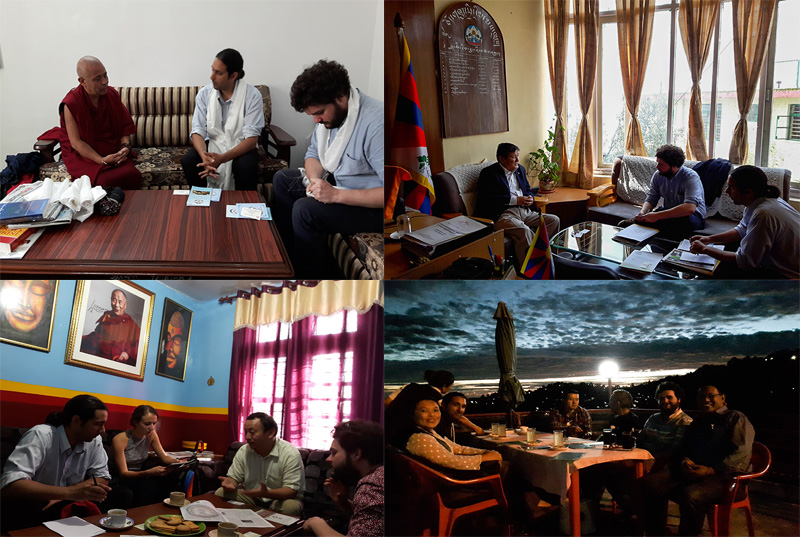 Dharamshala — Members of Reporters Sans Frontiers (RSF) visited The Tibet Post and the many Tibetan political and apolitical organisations in Dharamshala, where a large number of Tibetans in exile reside.

Dharamshala — Members of Reporters Sans Frontiers (RSF) visited The Tibet Post and the many Tibetan political and apolitical organisations in Dharamshala, where a large number of Tibetans in exile reside.

TPI is one of RSF's sources of information and communication for the dealings of freedom of press in the Tibetan region, controlled by China.

During their visit, they were interested in meeting with the representatives of various civil society and media organisations as part of their continuous interest in human rights, press freedom and media situation in Tibet. They were particularly interested in meeting with organisations that cover events in Tibet and that coordinate communication from inside Tibet to the outside world.

In their many meetings, they were reassured that the Tibetan press in India is free of any sort of censorship and that it is not under any pressure from the Indian Government or the Central Tibetan Administration. The problem lies then, in the acquisition of news and information from inside Tibet.

The RSF head of the Asia Pacific desk, Benjamin Ismail, stated, "the main issue that the Tibetan media in India faces today is the almost inexistent free flow of information from Tibet." Moreover, the safety, confidentiality and privacy of sources are principles that struggle to surface under the PRC's regime. Ismail further claimed "journalists need privacy and cyber security in order to be able to conduct their work independently and freely!"

Also in the meetings, the Chinese social media, Wechat, was often referred to. Wechat plays a growing role in the exchange of information between China and the outside world but Ismail believes it is both a blessing and a curse. As it has been developed by a company that has links with the government, it allows Chinese authorities to monitor everything that happens within it. At the same time, however, it has enabled communication, even though limited, between Tibetans inside Tibet and Tibetans in exile.

Wechat has proved itself quite dangerous to the people in Tibet. Ismail tells TPI that "[they] have observed, from some time now, that the government uses this massive surveillance as a justification to arrest netizens – ordinary citizens that have become de facto citizen journalists, providing information to the outside world – and to give them exceptionally long sentences. More often than not, Tibetans' arrests are more like kidnappings and their trials do not comply with human rights laws." The Secret trials, which take place after the kidnappings, are one of the many ways that the Chinese government violates fundamental human rights.

The organisations that communicate with Tibetans inside Tibet are aware of these risks and one of the ways they found to complicate the Chinese Surveillance is the use voice messages. Firstly because, technically speaking, voice messages are harder to analyze and secondly because the Tibetan dialects are a lot more challenging to be deciphered as audio. Ironically, Wechat has become the platform for free expression for the inhabitants of China.

The RSF members concluded their trip saying that they are very pleased to see the pluralism of the Tibetan press. They increased their network and expressed their wish to someday succeed in reaching Tibetans inside Tibet, directly.

RSF promotes and defends the free flow of information throughout the world. Based in Paris, it has 10 international offices (Berlin, Brussels, Geneva, Madrid, Milan, Stockholm, Tunis, Tripoli, Vienna and Washington DC) and more than 150 correspondents in all five continents.