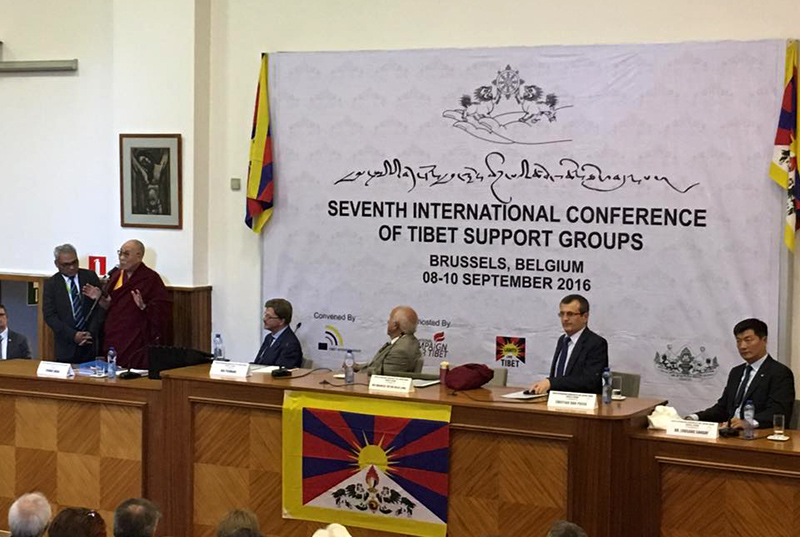 Brussels — "You are not only the friends of Tibet, but also friends of justice," His Holiness the Dalai Lama said, while delivering his speech at the opening session of the 7th International Conference of Tibet Support Groups, in Brussels.

The spiritual leader of Tibetan Thursday inaugurated the Seventh International Conference of Tibet Support Groups (TSG), on September 8 in Brussels. On behalf of the 6 million Tibetan people, His Holiness expressed his gratitude to all the Tibet Supporters, including Chinese for their sympathy and support for the just cause of Tibet.

His Holiness the Dalai Lama also spoke about the promotion of human values, inter-religious harmony and world peace as he frequently did. He said the use of violence is outdated and never solves resolves conflicts and called for the "philosophy of peace, non-violence and compassion."

In this context, the Nobel peace laureate has recommended more efforts for the betterment of humanity and encouraged the "practice of love, tolerance and forgiveness."

"I am convinced that the power of truth is stronger than the power of weapons," he said, when speaking to over 250 members of Tibet Support Groups from across the world, gathered in Brussels.

His Holiness also met Jan Figel, EU Special Envoy on Freedom of Religion or Belief Outside the European Union. "Freedom of religion is a fundamental right to which everyone is entitled, everywhere." Mr Figel wrote on his Twitter account, after their meeting in the City.

His Holiness the Dalai Lama arrived in Brussels Wednesday for an 18-day visit to Belgium, France and Poland. The visit includes public talks on ethics beyond religion, teachings and visit to the European Parliament.

He's scheduled to visit Paris for a two-day programme, beginning from September 13 after Belgium. It includes an audience for the Tibetan community and an inter-faith dialogue. From September 15 to 19, the spiritual leader will attend programmes in Strasbourg, including a visit to the European Parliament. After that he will visit Wroclaw in Poland for two days from September 21.

Some 250 delegates from 50 countries will discuss for three days of the Tibetan cause in the European capital . The conference will particularly focus on four themes namely: the political situation in Tibet, human rights , environment and openness to the Chinese people.

Increasingly, a number of Chinese delegates, including intellectuals are also attending the Special International Tibet Support Group Meetings from 27-20 September.

The first International Conference of Tibet Support Groups was held in 1990 in Dharamshala,India, seat of the Central Tibetan Administration.