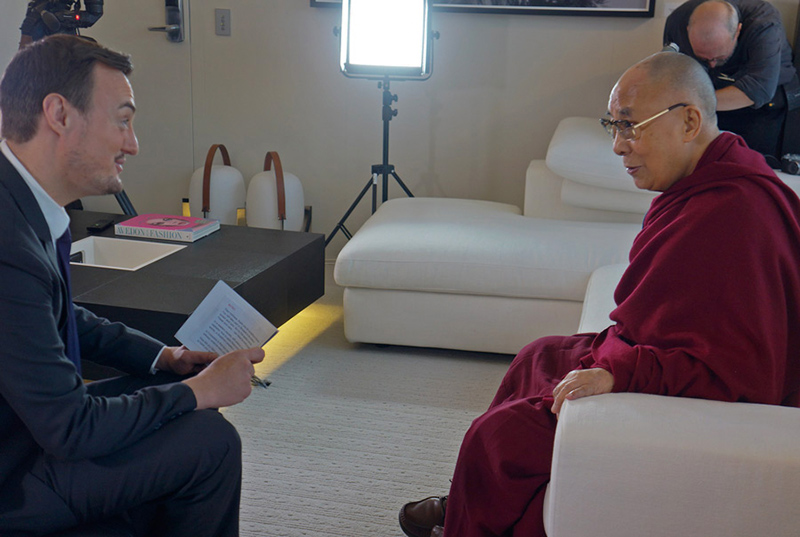 Brussels — In order to create a more peaceful world and a happier environment, His Holiness the Dalai Lama said that the balance between the material values and moral values must be maintained, by improving the existing educational system.

His Holiness accepted interview by Francois Mazure, Editor-in-Chief of the Belgian television channel RTBF, after Tibetan community and supporters organised a hero's welcome for His Holiness the Dalai Lama upon his arrival in the Belgian capital of Brussels, on September 7.

His Holiness answered RTBF's questions on religion, power and life, and in particular, the significance and impact of compassion and care. Mazure's first question referred to the theme of the forthcoming Mind & Life conference—Power and Care.

He wanted to know how these two ideas can work together. His Holiness told him power is to do with ability. It's about being effective. But power can be constructive or destructive. Care, however, is about respecting others' lives, rights and well-being. It's good when power is used for benefit. He continued:

"It's because compassion is related to human life, to our survival, to human society that it is part of the message of all religious traditions. Today, we 7 billion human beings are facing all sorts of problems as a result of education systems and lifestyles oriented towards material goals, while only religion gives a sense of inner values," he said.

"And yet not everyone is interested in religion and even among many who are some are not very serious. Only by improving education can we reach all human beings," the Nobel Peace Prize laureate told the RTBF.

When Mazure referred to recent terrorist attacks in Europe, including here in Belgium, and asked what His Holiness had to say to those who are angry, he replied that Tibetans too have faced difficulties and some are angry, but he tells them that anger brings no solution and disturbs your peace of mind.

He spoke of writing to President George W Bush, who he counts as a friend, the day after the September 11th tragedy. He said he conveyed his sympathy but also expressed the hope that any response would be non-violent. He said he feels that if the Iraq crisis had been approached in a non-violent way, the situation would have been much better today.

He reiterated that the use of force creates more difficulties than it solves. He added that it is unhelpful to refer to Muslim terrorists or Buddhist terrorists and so forth, because once people engage in terrorist violence they have ceased to be proper Muslims, Buddhists or whatever faith they claim.

Mazure asked His Holiness whether the next Dalai Lama could be a woman and whether more female leaders would be good for the world. His Holiness confirmed that some years ago he told a Paris magazine that if it would help, a female Dalai Lama was quite possible.

The spiritual leader of Tibet also remarked that today we have nearly 200 nations in the world. If their leaders were women, he said, there's a good chance there would be less killing going on.

His Holiness agreed that ecology is extremely important because the effects of climate change and the increased frequency of natural disasters are affecting us all. He assured Mazure that he had not retired in 2011 because he was discouraged or for any other negative reason, but because since coming into exile he had worked to establish democracy among Tibetans.

Towards the end of their conversation, His Holiness told Mazure, "When I die, I pray I'll be reborn where I can be useful."

His Holiness the 14th Dalai Lama is the spiritual leader of Tibetan Buddhism and the Tibetan people. In the past, he has also served as the political leaders of Tibet. He was exiled from Tibet in 1959 after a failed Tibetan national uprising against the Chinese occupation. He led the Tibetan government-in-exile for more than 50 years but has passed his political authority to democratic institutions in 2011.

Aany sign of loyalty to him in occupied Tibet can be met with arrests, lengthy sentences, torture, violent crackdowns and 'harsh re-education' programmes. Despite more than 65 years of China's oppressive occupation, Tibetans remain fiercely loyal to their spiritual leader.