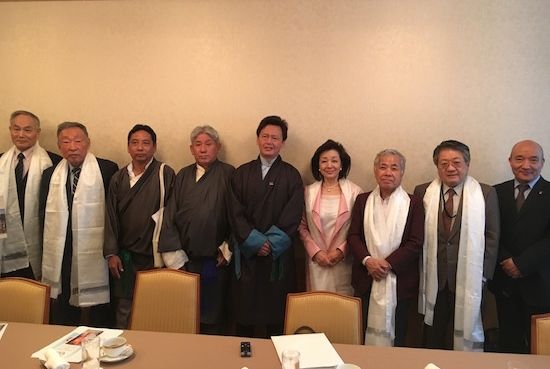 Around 23 members from both the House of Representatives and House of Councillors attended the meeting held at the Parliament building in Tokyo. Ms Sakura Yoshiko, President of the Japan Institute of National Fundamentals, a think-tank in Japan, who takes keen interest in the Tibet issue, was present at the meeting.

Recalling his visit to Dharamshala, Mr Shimomura Hakubun, the former minister of education, expressed strong willingness to offer stronger support for the preservation of Tibetan people’s identity, language and culture. He said he met Tibetan political leader Dr. Lobsang Sangay during the latter’s visit to Japan in February this year and discussed with him how best to support the Tibetan people and concluded that it is worth supporting the Tibetan culture and religion as it is contributing to peace and non-violence in the world.

Mr Dawa Tsering, member of Tibetan Parliament, said the Central Tibetan Administration is making great effort to preserve the Tibetan culture, language and religion. He appealed to the Japanese parliamentarians to invite His Holiness the Dalai Lama to the Japanese Parliament. "Your support to our visit to Japan sends a strong message to the international community about Japan’s support for truth and justice. In contrast, a Tibetan parliamentary delegation could not visit Russia as they were denied visa," he added.

He also appealed to Japan to support the education and health of Tibetans which will strengthen and sustain the Tibetan freedom movement in the long run.

Addressing the Japanese parliamentarians, Tibetan MP Tenzin Jamyang said the self-immolation of Tibetans inside Tibet shows the Chinese government’s continued repressive policies in Tibet. He said the Central Tibetan Administration is giving utmost importance on education of young Tibetans, adding that exchange program between Japanese and Tibetans will be a great benefit for Tibetans.

Tenzin Jamyang informed the Japanese parliamentarians about the environmental crisis in Tibet as a result of the Chinese government’s policies in Tibet. He said the world community, especially the Asian subcontinent, should make efforts to save the environment of Tibet which once destroyed is irreparable.

The members of Japanese Parliament assured their support for education of Tibetans in exile and encouraged Tibetan students to come to Japan for further studies.

The Tibetan Parliamentary delegation made a strong appeal to Japanese Parliamentarians to pass a resolution in support of the Middle-Way Approach to resolve the issue of Tibet through dialogue with the Chinese government.

The Japanese parliamentarians said the world will be in shock if it becomes aware about the 147 Tibetans who have set themselves on fire. Therefore, the international community should know what is happening inside Tibet.

Later in the afternoon, the Tibetan Parliamentary delegation met with Ms Sakura Yoshiko, President of the Japan Institute of National Fundamentals, a think-tank in Japan and her colleagues.

They discussed about the role of the Panchen Lama, his abduction and how the Chinese government uses its own-appointed Panchen Lama Gyaltsen Norbu as a political tool to control Tibet.

Ms Sakurai said it is of paramount importance for Tibetans to have the reincarnation of His Holiness the Dalai Lama when he is here to unite and guide the Tibetan people, and emphasized that the Chinese communist government will change and therefore it is important for Tibetans to preserve their language, culture and religion.

Responding to the Tibetan Parliamentary delegation’s appeal for education of Tibetans, Ms Sakurai said: “I will discuss with members of the Japanese Parliament regarding this important matter. Financial assistance from the Japanese government will be very helpful for education of Tibetans in the long run. Do encourage Tibetan youngsters to come to Japan so that they can learn many new skills to stand up their own feet and contribute to the cause of Tibet.”