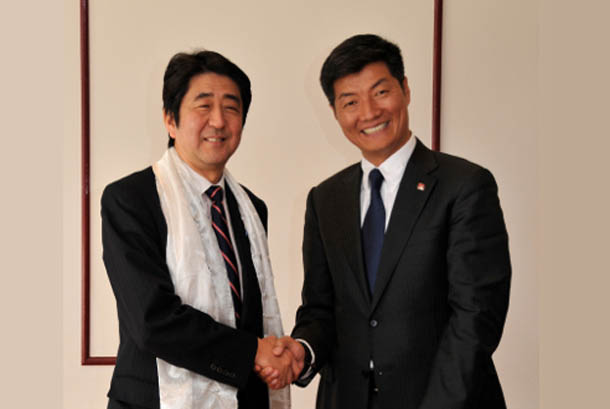 Shinzo Abe's Liberal Democratic Party (LDP) secured 312 seats retaining the two-thirds majority in the lower house of Parliament. Abe's ruling coalition already has a two-third majority in the upper house giving the LDP supermajority in both the houses.

In his congratulation message to Japanese PM Abe, on October 23, 2017, President Dr Sangay expressed his gratitude to Japan for their support for Tibet and for always being a gracious host to His Holiness the Dalai Lama and other Tibetan dignitaries including the President himself during their visits to Japan.

"On behalf of the Tibetan people, I would like to congratulate Shinzo Abe on winning the elections again and wish him all the best as the next prime minister of Japan. I thank the people and government of Japan for their long-standing support for democracy and non-violent struggle of the Tibetan people,"President Dr Sangay said.

President Dr Sangay had previously met with Abe on four separate occasions in April 2012. "I look forward to your continued support toward resolving the issue of Tibet based on the Middle Way Approach of the CTA," Dr Sangay added.

During a meeting with the Dalai Lama in November, Mr Abe reiterated this support. Japanese parliamentarians have previously issued a statement which urges the Chinese government to end its repressive policies and to hold a dialogue with Tibetan leaders aimed at taking concrete action to resolve the issue of Tibet.

CTA President met with Abe in April 2012. Abe said that the Tibet issue was one of those rare issues which enjoys multi-party support in Japan. He said he would do his best to help change the situation in Tibet. Abe reiterated his support during his meeting with His Holiness the Dalai Lama's in November 2012.