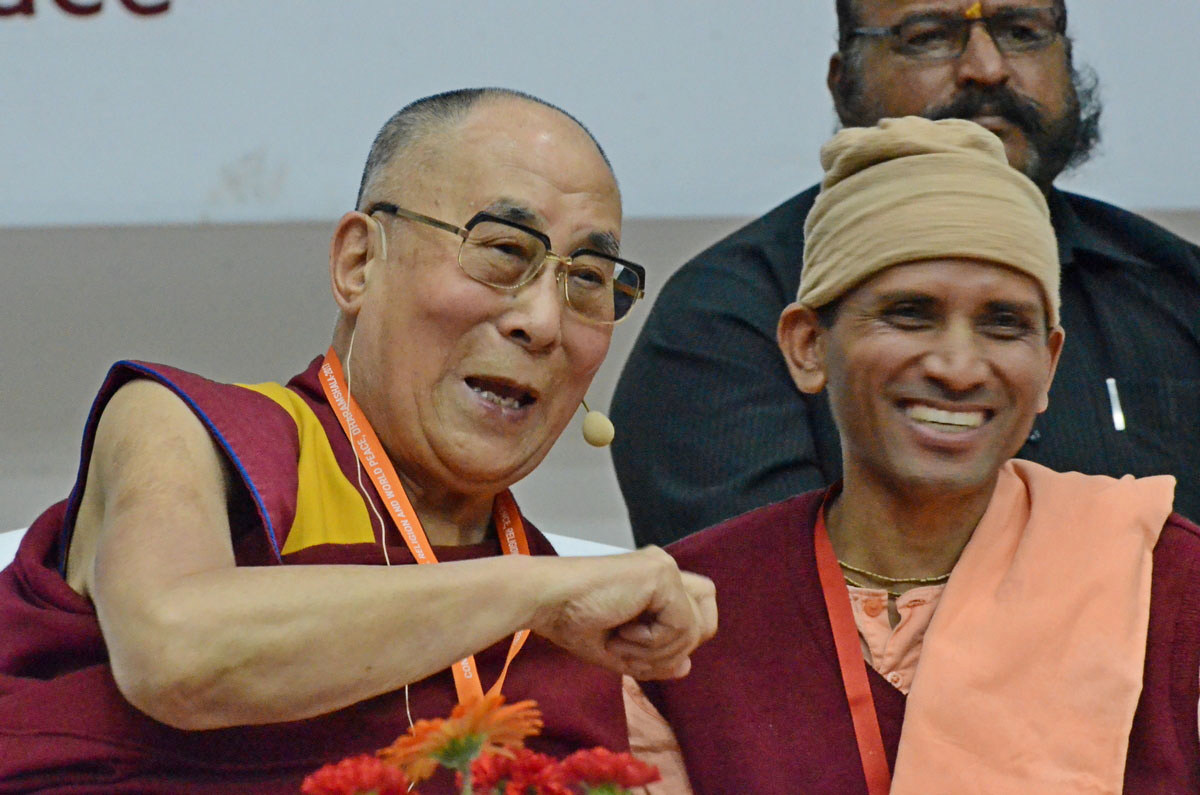 Dharamshala, India — "Compassion brings peace of mind," said His Holiness the Dalai Lama at a conference on Science, Religion and World Peace, held at the Government College in Dharamshala, H.P., India, organized by the Bhaktivedanta Institute, Karnal.

There, hundreds of people from 11 countries, including students gathered in the auditorium of the Government Degree College, Dharamshala to listen to His Holiness's message on compassion for all humankind – his secular ethics. His Holiness talked about a variety of topics such as love, compassion, peace, humanity, violence, and Climate change. Except natural disasters.

His Holiness said almost all the problems the world is facing today are human-created problems which can be resolved through human effort. Prayer alone is not enough, what will bring peace in the world is people cultivating peace of mind. THe stressed the need to control negative emotions, such as anger, which weakens people's immune system and as such was also bad for health. He said that that love and compassion were the ultimate sources to bring inner peace and happiness.

His Holiness was welcomed to the stage and presented with a bouquet. All stood for the National Anthem. After a song of praise to Lord Krishna, the principal guests gathered to light the peace lamp. The Chairman for the occasion, Dr Sudipto Ghosh gave a welcome address, concluding with a quotation from His Holiness, “If you want others to be happy, practise compassion; if you want to be happy yourself, practise compassion”. In a subsequent address elaborating on the theme of the conference, Dr PB Sharma remarked that truth, the cardinal principle of religion, is also a principle of science. A message from Subhag Swami stressed the need to create a culture of peace and harmony. 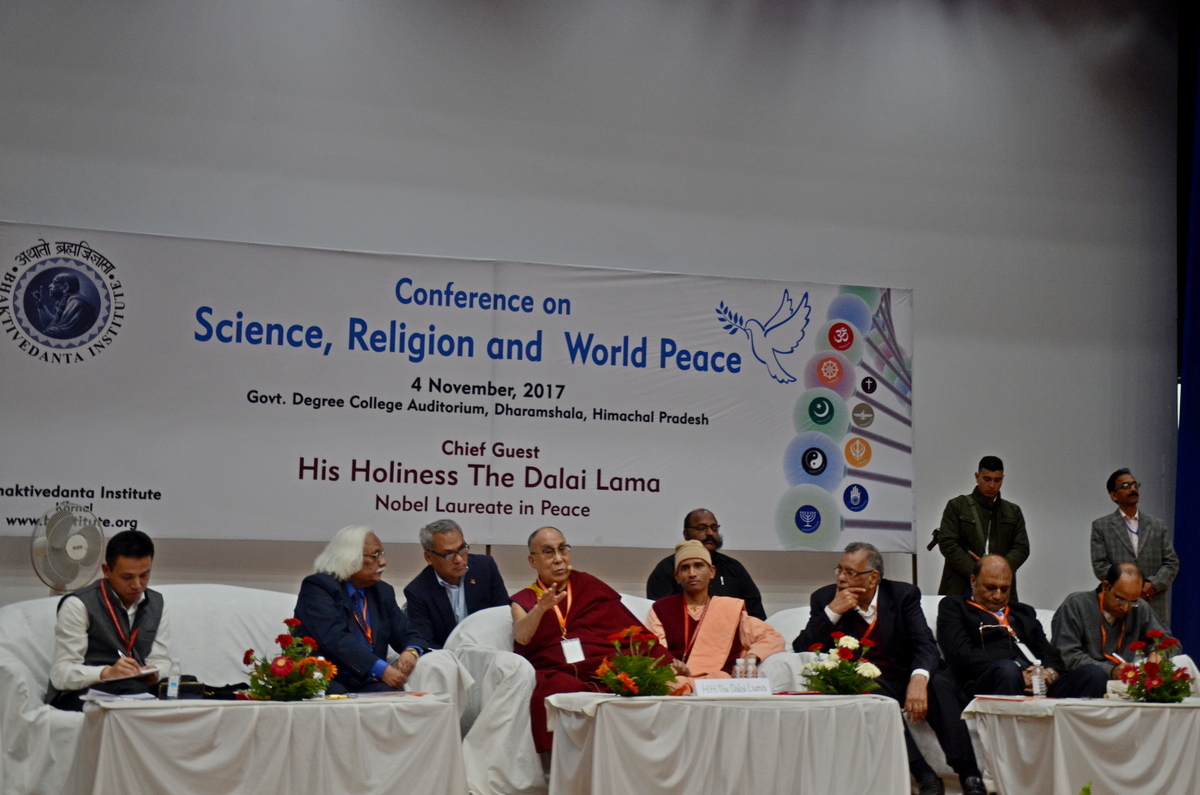 When His Holiness was invited to speak, he wanted to greet his respected brothers and sisters on the stage, only to observe that there were no sisters. Turning to those in the audience, he began, "I'm extremely happy to participate in this meeting. Among this gathering of brothers and sisters, some of us, like me, belong to the 20th century. Others who are not more than twenty years old belong to the new generation of the 21st century."

"The 20th century has gone, but if we look back it was an era of war and violence as a result of short-sightedness, giving in to destructive emotions, a lack of moral principles, as well as a lack of concern for others' well-being. This was compounded by a belief in the use of force to solve problems. These factors still prevail to some extent at the beginning of the 21st century," he said, adding: "The news is filled with stories of killing. Corruption flourishes. Poor people suffer. And in many places religion is used as an excuse for violence, while scientific developments have provided more efficient ways to kill."

"We have to stop and think—if we go on like this, the 21st century will be an era of violence and suffering like the century that went before. For someone 82 years old like me there isn't much to worry about, but those of you who belong to the younger generation today need to question whether you want to see killing, beating and cheating continue. Much of the suffering we face is of our own making. Climate change is something we human beings have brought about through negligence. We have to ask how we can reduce and counter the problems we have created." 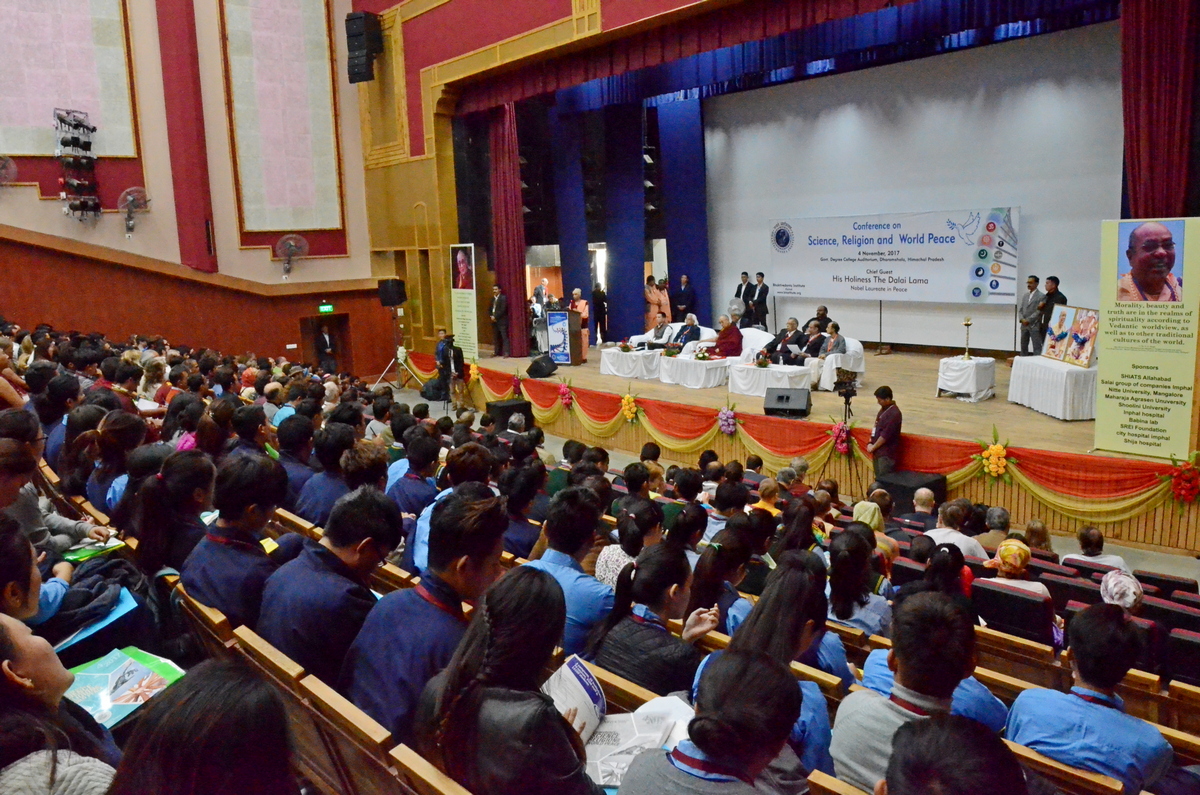 His Holiness reported that scientists cite evidence that basic human nature is compassionate. This is borne out by our common experience of being cared for by our mothers. Without that care we would die. Common sense also tells us that if one of our neighbours is friendly and smiling when we meet, but another frowns with anger and hostility, we feel more comfortable with the one who smiles.

The spiritual leader of Tibet also emphasised that secular ethics must be achieved through education and not just prayers or faith. "If it is motivated by anger, science is likely to be destructive. His Holiness observed that we have marvellous brains—how sad it would be if we only use them to find ways to kill each other. He suggested that all 7 billion human beings alive today have the potential to develop compassion and can be guided to do so by adopting universal values that he likes to call secular ethics. He clarified that he uses the word secular in an Indian context of unbiased respect for all religions."

The Nobel Peace Laureate noted that so far science has learned a great deal about the material world, but is now gradually beginning to explore the mind and human consciousness. He predicted that during this century science will learn much more about our inner world. His Holiness recalled nuclear scientist Raja Ramana's telling him that quantum physics' new observations that phenomena do not exist objectively had been anticipated long ago in Nagarjuna's writings. He asserted that ancient Indian understanding of the workings of the mind and emotions also remains relevant today. 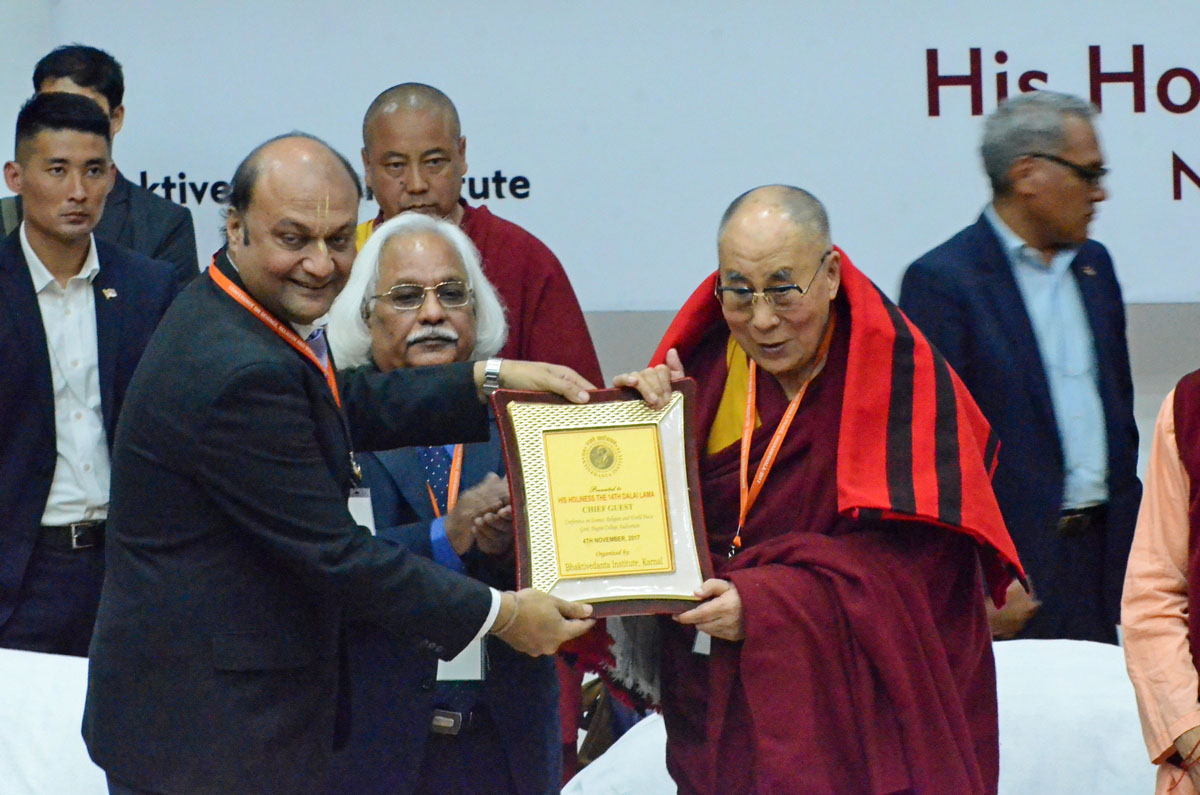 "We can change our minds. We don't have to give in to anger and hatred. Since compassion and anger cannot co-exist, the more we cultivate compassion the more our anger will be reduced. Other animals seem to have a capacity for some sense of compassion, but they lack the intelligence we human beings possess to cultivate and develop it.

"Compassion brings peace of mind and if we have that we won't be deflected when negative events occur. A Christian monk I met in Montserrat, Spain, spent five years as a hermit in the mountains living only bread and tea. I asked him what he practised and he told me he meditated on love. And as he said that I could see from the sparkle in his eyes that he experienced the real, deep and lasting happiness of peace of mind.

"Nowadays, whenever I can I tell Indians that you already have a thorough understanding of our inner world and the workings of our mind and emotions. However, in pursuit of material goals, many people neglect this ancient knowledge. One of my commitments is to encourage its revival here in India. I believe that India is a country where it is possible to combine the benefits of a modern education with the benefits of this ancient understanding of the mind. What's more I believe that this is something India, the world's greatest democracy, can contribute to the wider world. If we are to succeed, we have to make an effort and we have to start now. Please think seriously about this." 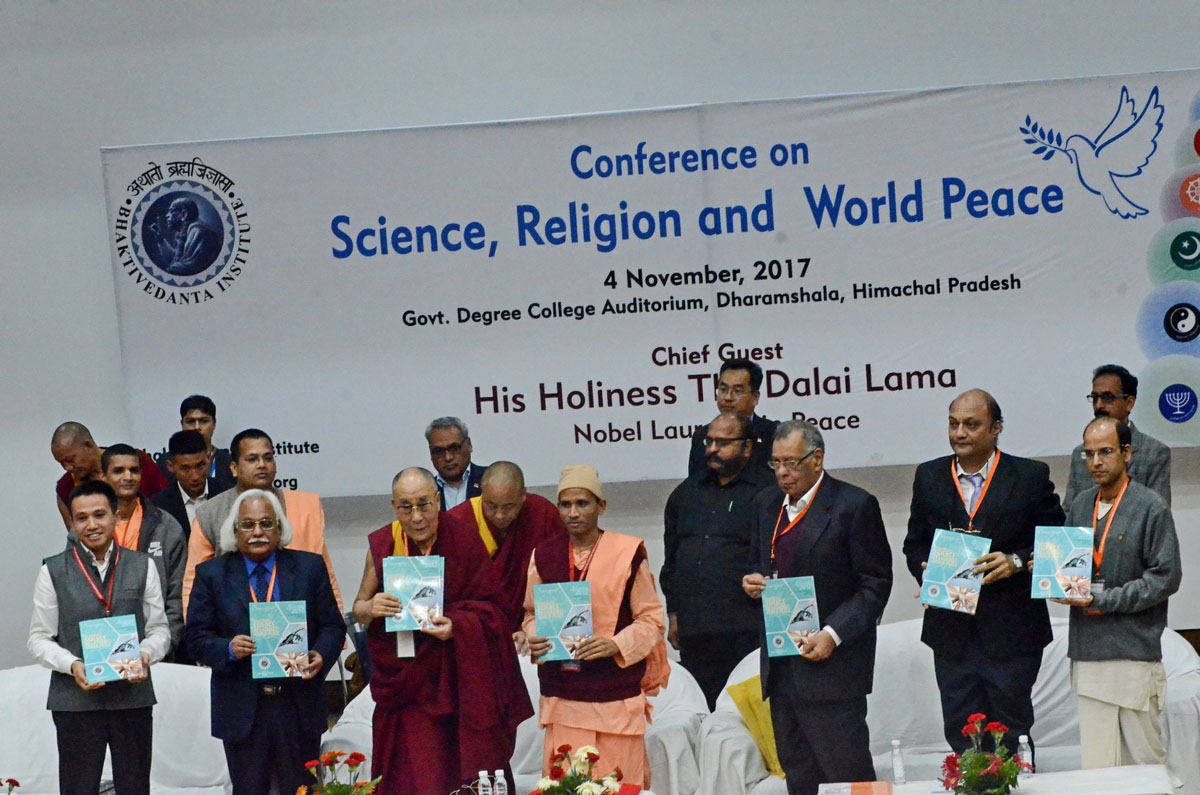 In responding to several questions from the audience His Holiness expressed appreciation of the practice of vipashyana in the form of analytical meditation. He stated that the purpose of life is to find happiness and joy, observing that day to day we are sustained by hope. He repeated that cultivating a proper sense of secular ethics is a basis for developing compassion. This also has a bearing on world peace. He added that the goal should be the demilitarization of the world, asking "Is this an empty dream?"

Challenged to say how an individual can really help others he agreed that it can sometimes seem as if one person will not be very effective. However, he stressed that change in the world always begins with an individual who shares what he or she has learned and passes it on to others. He reiterated that human beings are intelligent. We are able to understand that compassion is a realistic state of mind, whereas anger is not. We can also understand and observe that anger destroys our own peace of mind as well as good family relations. Anger attracts no friends.

A student from Lower TCV asked about the role of suffering in our lives and His Holiness told him that 'it depends on your perspective. If you only focus on the hardship you undergo it's tough, but if you can adopt a broader perspective it's possible to recognise advantage and benefit even in great loss.'