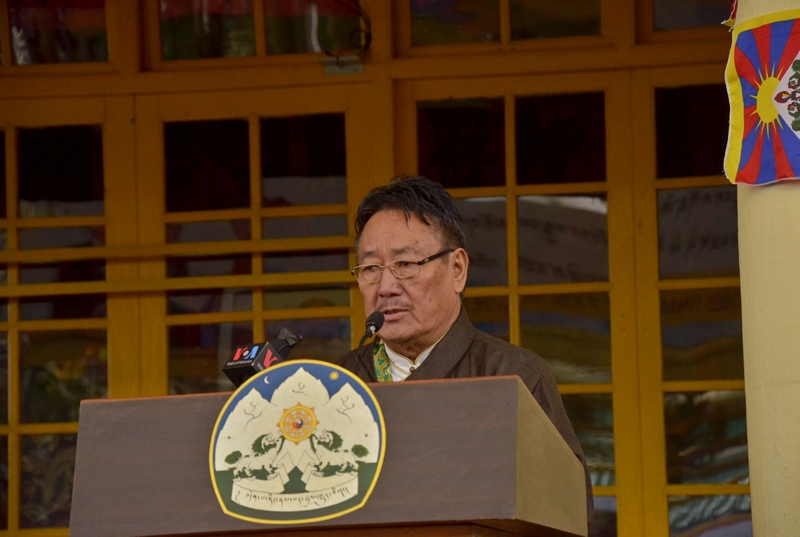 Dharamshala — On December 10, 2017, around two thousand people gathered at the temple of His Holiness the Great 14th Dalai Lama of Tibet. The celebration included Tibetan cultural dances and statements both by the Tibetan Parliament in exile and a member of the Indian Parliament. Performers, both young and old, came to the main Tibetan temple in Mcleod Ganj, Himachal Pradesh to participate in the occasion.

Dharamshala — On December 10, 2017, around two thousand people gathered at the temple of His Holiness the Great 14th Dalai Lama of Tibet. The celebration included Tibetan cultural dances and statements both by the Tibetan Parliament in exile and a member of the Indian Parliament. Performers, both young and old, came to Mcleod Ganj, Himachal Pradesh to participate in the occasion. The Kashag distributed a statement to visitors expressing their gratitude towards His Holiness and congratulations to this year’s recipient.

On this joyous occasion of the 28th anniversary of the conferment of Nobel Peace Prize on His Holiness the Great 14th Dalai Lama of Tibet, the Kashag, on behalf of Tibetans inside and outside Tibet pay obeisance and bow down in deepest reverence and express our highest form of gratitude to His Holiness the Dalai Lama, the supreme savior of all sentient beings, the master of all teachings of the Buddha, a great champion of peace in this world, the human manifestation of the Bodhisattva of compassion, the spiritual sovereign of the three realms of existence and the savior and supreme leader of Tibet and the Tibetan people. We also extend our warm greetings to the Tibetan people, friends and well-wishers around the world… It gives us much delight to congratulate this year’s Nobel Peace Prize winner, the International Campaign to Abolish Nuclear Weapons (ICAN). Their tireless work to completely ban and eliminate the creation and use of all nuclear arsenals are highly commendable. His Holiness the Dalai Lama has over the years strongly advocated for a nuclear free world.

Additionally, as December 10th is also observed as World Human Rights Day, the Kashag also reminded the United Nations and the UN Human Rights Council (UNHRC) that there is still much work to be done across the world. Sixty-nine years have passed since the Universal Declaration of Human Rights, yet the situation in many places, including Tibet, remains deplorable. The Tibetan Parliament in exile cited annual reports documenting ground reality from UNHRC, the Foreign Relations Council, and Freedom House as enough evidence to end deliberation and take action.

This year alone, five Tibetans have self-immolated in protest of the repressive Chinese policies which restrict the cultural rights of Tibetans despite both the Chinese Constitution and National Regional Autonomy Law stipulating provisions for religious freedom, protection of culture, language and environment. The latest self-immolator was a 63-year-old monk, bringing the total to 150. The Kashag statement calls the Chinese response to criminalize self-immolation, arresting family members of self-immolators and refusing to return the body as, “an abject disregard for basic human rights, a travesty of justice, and a violation of the basic principles of the Universal Declaration of Human Rights.

The statement went on to highlight the support from the European Union, Australia, Canada, Denmark, Norway, Sweden, and the United States. In October, the United States Congress passed a resolution supporting His Holiness and Tibet. Additionally, last month, five Canadian Senators launched an inquiry that focuses on five political prisoners of Tibet and the Panchen Lama case. Furthermore, the Kashag statement also referenced recent call by the Canadian Foreign Minister Chrystia Freeland for China to allow the United Nations High Commissioner for Human Rights and the United Nations Special Rapporteur on Freedom of Religion and Belief to visit Gedhun Choekyi Nyima while also allowing Canadian diplomats and delegations greater access to Tibet.

The statement continued by calling the Chinese government’s effort to bring economic development to Tibet a failure and urged them to see the benefit and “magnanimity of the mutually beneficial Middle Way Approach, which seeks genuine autonomy but not independence.” The Kashag called for the Chinese government to resume dialogue with the envoys of His Holiness the Great 14th Dalai Lama in an effort to move forward.

Finally, the Kashag, took the opportunity to inform the crowd of their intentions to mark 2018 as “Thank You Year” in celebration of the 60th anniversary of His Holiness the Dalai Lama’s arrival in exile along with the first 100,000 Tibetans. From March 31st to April 4th, 2018, The Central Tibetan Administration will observe a series of ‘Thank You India’ events in Delhi to publicly express their gratitude to the people and government of India. These events will be organized worldwide to express their gratitude to their host countries who have been instrumental in in the Tibetan cause.

The Kashag statement was thoughtful and powerful, critical but gracious. The Kashag implored the world governments to take action on the existing human rights reports, published by a variety of International Organizations, instead of using further investigations as a stall tactic. However, the Kashag also indicated their own willingness to engage in a dialogue with the Chinese government. It was critical of human rights violations but expressed their desire to move forward. It demanded equality and conveyed gratitude. Ultimately, the statement was perfect for a day that celebrated a declaration of universal human rights and His Holiness the Dalai Lama, who inspires compassion but also action in the face of inequality.