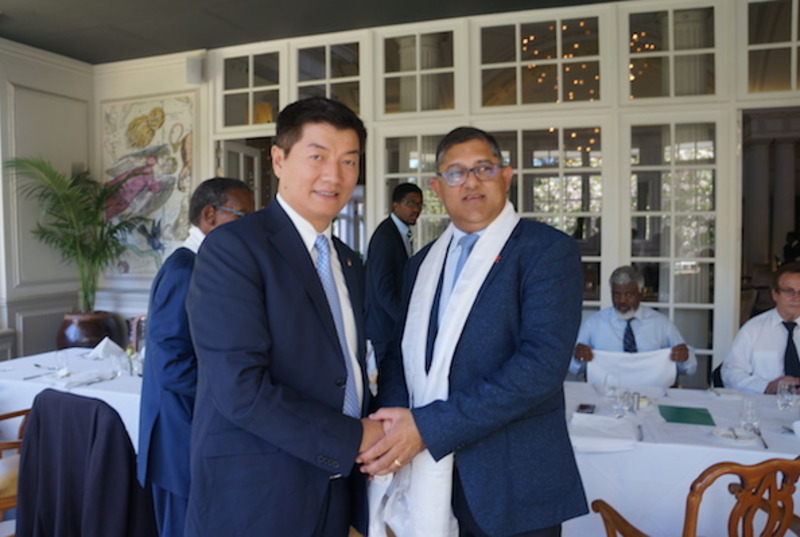 Chinese authorities have expressed their dissent for the visit, claiming that South Africa receiving the Tibetan President went against the “long-standing commitment to the One China policy” and hinted that economic and investment prospects between the two country could take a hit.

“It has sent a wrong political signal to the world community, and has undermined the political mutual trust between China and South Africa. It runs against the common interest of SA-China relations, and will undoubtedly discourage Chinese investors’ confidence in South Africa, undermine SA’s efforts for poverty reduction, and cause grave harm for the interest of South Africa and the South African people,” a statement from the Chinese embassy read.

On February 8, around thirty people, allegedly at the request of the Chinese embassy in South Africa, staged a protest at the University of Stellenbosch while CTA President Dr Lobsang Sangay was addressing the students and faculty of the University’s law department.

The protesters comprised of both South Africans as well as Chinese. The protesters were seen raising slogans such as ‘One China’ and ‘Stop Splitting Tibet from China’ and carrying banners reading statements like ‘One China Policy.'

While addressing the students, President Sangay said, “I’ve walked the same path as South Africa has walked and its the same message I want to communicate: to embrace the values of the constitution. You must all embrace it and uphold it. If South Africa could achieve success, so can Tibet, without violence.”

Regarding the protesters, Dr Sangay smiled and showed a victory sign symbolizing the victory of freedom of speech, saying “I don’t agree with them. But they have a right to protest.”

He appreciated the fact that university stood its ground despite pressure from various quarters to cancel the event. “The University especially the law school stood up for freedom of speech and the values enshrined in the South African constitution. It’s admirable that there are people who’ll continue to uphold the spirit of democracy and human rights,” he added.

Allegations have been made that the protest was at the request of the Chinese embassy in South Africa, as hours after the event, the embassy of the People’s Republic of China in South Africa issued a press statement on its official website lauding the ‘massive protests.’ Titled "The Sneaked-in Head of 'Tibetan Administration in Exile' Met with Massive Local Protest," the statement read “When the news spreads that the self-proclaimed 'President' of the 'Tibetan Administration in Exile' Lobsang Sangay attempted to address the Faculty of Law at the Stellenbosch University on 8 Feb, hundreds of South African locals and members of the Chinese community traveled to the school to express, in a peaceful and orderly gathering, their strongest anger and rejection of the move by the politician to sabotage China-SA relations.”

The Inkatha Freedom Party led by its founder and president Prince Mangosuthu Buthelezi condemned the South African Chinese embassy’s actions in response to CTA President Dr Lobsang Sangay visit to the country. It released a press release yesterday in which it expressed its outrage at the lengths the Chinese government will go to in order to silence the voice of the Tibetan people in South Africa.

“Yesterday’s staged [Chinese] Embassy protestations against the president of the Tibetan government in exile, Dr Lobsang Sangay, when he visited the law faculty at Stellenbosch University will bring nothing but further shame and disgrace to China as it continues with its policy of oppression against the people of Tibet, no matter where in the world they may be found,” IFP Chief Whip in Parliament, Mr Narend Singh MP said.

????r Sangay is not only an invited guest of Prince Mangosuthu Buthelezi, but also a guest of the people of South Africa. The Chinese Embassy’s actions yesterday only serve to reinforce the negative perceptions that people around the world hold as regards China’s oppression of the people of Tibet.

“The Chinese Embassy should receive the strongest of rebuke from the South African Government for its cheap theatrics and attempts at sowing discord in South Africa, as well as its recklessness in potentially placing the safety and lives of South African university students in harm’s way,” MP Singh added.

Sandy Kalyan, a member of the South African Parliament from the country’s largest opposition party, the Democratic Alliance (DA) condemned China’s opposition to the visit of Dr Lobsang Sangay, to South Africa. Calling the behaviors of the Chinese embassy as akin to a child throwing tantrum, Sandy called on China to stop “overstepping” on South Africa’s sovereign rights.

“The reaction by the Chinese Embassy at the visit to South Africa by Dr Lobsang Sangay, the President of the Central Tibetan Administration is so over the top and quite ludicrous,” Hon Sandy Kalyan said adding that, Dr Sangay had been invited by Hon Buthelezi to attend SONA (State of the National Address) by President Zuma.

“In a manner reminiscent of a child throwing a tantrum, the Chinese issued a strongly worded statement that the visit would result in Chinese investment being discouraged. Such veiled threats to the Government of SA cannot be ever entertained. If China wants to go, it should go. The time for non South Africans to hold the South African Government to ransom is long gone,” wrote MP Sandy.

Condemning the protest, she said, ????r Sangay, a Harvard Law Graduate was to address students at the Faculty of Law in Stellenbosch Univesity when the Chinese Embassy Officials arrived with a rent a crowd of about 30 persons and tried to disrupt the event. The DA is glad to say that Dr Sangay did go ahead with his address and received a great response from a very appreciative audience.”

She questioned the South African Department of International Relations and Cooperation (DIRCO) over an alleged warning to the CTA President asked the department to clarify the meaning of the warning.

“The Department of International Relations and Cooperation (DIRCO) is allegedly supposed to have issued a “stern” warning to the Office of Tibet for Dr Sangay to keep a low profile,” she noted.

“The Democratic Alliance party will be writing to the Minister of DIRCO to clarify what the warning means and also seek clarity on China’s assertion that the South African Government has made a promise to China not to allow Tibetans to South Africa. Clearly this is a gross violation of the Constitution of our country and has to be challenged,” she said.

Hon Sandy Kalyan has been a Member of Parliament in the Parliament of South Africa with the official opposition Democratic Alliance since 1999 to present day.