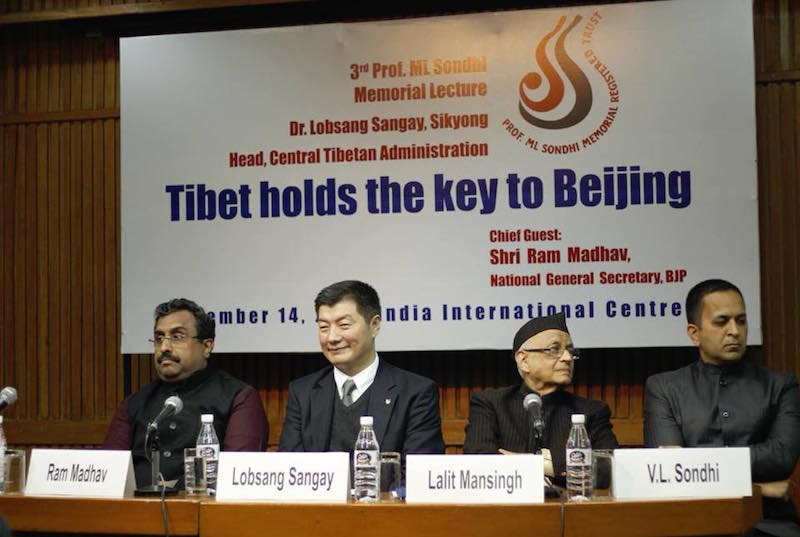 New Delhi, India — Delivering a lecture on 'Tibet holds the key to Beijing" at the 3rd Professor ML Sondhi Memorial Lecture at India International Centre, New Delhi, President Dr Lobsang Sangay said "Tibet is a litmus test for Beijing and holds the "key" to understanding China in many ways and also is a potential catalyst to bring about changes inside China."

Dr Sangay, President of the Central Tibetan Administration spoke on the theme 'Tibet holds the key to Beijing' which was the topic of an article written by Professor ML Sondhi in 1992 for The Telegraph.

The chief guest at the lecture was Shri Ram Madhav, National General Secretary of BJP, India's ruling party and a writer, scholar and an intellectual. Audience at the talk included high profile personalities including former ambassadors, former foreign secretaries, retired military generals and strategic thinkers, according to a post on the CTA's official website.

President Dr Sangay said that Tibet is a "litmus test" and is a potential catalyst to bring about changes inside China. He also asserted that India should declare Tibet as its core issue as China has always considered Tibet as a palm to reach out to five fingers—Ladakh, Nepal, Sikkim, Bhutan and Arunachal Pradesh.

"You ought to support Tibet, otherwise China is coming and penetrating every aspect of your society. There are forces within China that want the country to transform into a liberal democracy and Tibet can be a catalyst in that," he said.

Commenting on United States President Donald Trump's proposal for zero aid in 2018 to the Tibetans, reversing the decades-old American policy of providing financial assistance to the community for safeguarding their distinct identity, Sangay told The Sunday Guardian: "We are having discussions over it and we believe that it will be restored."

Dr Sangay spoke about China's new era declared by President Xi Jinping and how the world order will be affected by China's transformation, and the significance of Tibet as the key to understanding a rising China.

"Xi Jinping in his three hours speech, spoke about Socialism with Chinese characteristic in the new era. What it essentially means is that there will be no liberal democracy, no freedom of speech and no rule of law, it is essentially a one party law," the CTA President said.

"In this context, the Late Professor ML Sondhi was prophetic. From the very beginning, he said Tibet is the core issue between India and China relationship."

"Had India taken a stand in 1950s and 1960s on Tibet, China would have been pushed back or at least could have been paused, but no one took a stand and allowed China to come to the border of India. Now we have a 3500-km long border, which never existed before between India and Tibet in the past. Now they are entering Droklam because we let them come to Tibet."

He also recalled Prof Sondhi's recommendation about declaring Tibet as 'a zone of peace' that will act as a buffer between India and China. "For decades, the late professor ML Sondhi have said that the least India could do is to declare Tibet as a zone of peace and a buffer zone. At least denuclearize Tibet. However, no one spoke and no one came out in support of Professor ML Sondhi."

"If those conditions were put on the table and you have accepted Tibet as a zone of peace, at least there won't be any nuclear war nor would there be 1,800 Chinese troops standing at Droklam, as we speak today. Hence, Tibet is a litmus test for Beijing and holds the "key" to understanding China in many ways and also is a potential catalyst to bring about changes inside China," he said,

Dr Sangay also spoke about Tibet as the water tower of Asia as Tibet is the source of Asia's major rivers. He highlighted China's rampant mining and destruction of Tibet's fragile environment in the name of development and called on China to restore the stewardship of Tibetan plateau to its original and natural custodian, the Tibetans.

He further compared China's belt and road initiative with the occupation of Tibet. "We lost our country because of one belt and one road. Tibet is the key to unravel the deception, the strategy, the execution, and Tibet could be the catalyst to push back on China. Hence Prof. ML Sondhi's prophetic stand on Tibet should be the core issue between India and China," he emphasised.

Madhuri Santanam Sondhi, the Chairperson of the Professor ML Sondhi Memorial Trust and Director of ML Sondhi Institute for Asia Pacific Affairs, gave the welcome speech. In her welcome remarks, She applauded the democratic establishment of the Central Tibetan Administration and the tibetan people's peaceful movement to restore freedom.

She also underlined the importance of Tibet in the Sino-Indian relationship and how Tibet due to its geo-strategic location can bring about peace between the two Asian giants.

Quoting from the late Professor ML Sondhi's article titled Tibet holds a Key to Beijing, she said: "there is simply no way in which India can ignore strategic location of Tibet as the heart of Asia. As long as long it remains a location for missile bases and for bombers and missiles targeted at Indian citizens and cantonments, there can be no real agreements between the two biggest states of Asia."

Shri Lalit Mansigh, the trustee of the Professor ML Sondhi Memorial Trust cited that His Holiness the Dalai Lama in his recent interview in a newspaper has mentioned that 'Tibet could ultimately control China through Buddhism,' and he raised a question that how Tibet can controls China? But then he said it could be possible by narrating how Mahatma Gandhi with his non-violence movement defeated mightiest empire in the world with his walking stick.

"Mahatma Gandhi and His Holiness the Dalai Lama must be considered as some of the most brilliant strategic thinkers of their time even if it goes against the conventional wisdom," he added.

"His Holiness is the most powerful deterrent against China. It is a deterrent which has more explosive power than the entire nuclear arsenal combine together," he continued.

"As long as His Holiness the Dalai Lama is in India, with India, India is safe against China."

"Just as Buddha has come from across the mountains to India, spent his life in India. We, in this generation is blessed that His Holiness has come from across the mountain to spend his lifetime with us. I am sure you will join me for praying for his long life and strength and eventually seeing Tibet liberated in his lifetime." Shri Lalit Mansingh.

Delivering a lecture at the third Prof. ML Sondhi Memorial Lecture, Madhav said: "Engaging with China is the best available option for Tibet right now. Also, whenever required India and its citizens will stand by Tibet." Madhav, a known expert in Sino-Indian relations, also called for adopting a pragmatic foreign policy and not "romanticism" in managing neighbours.

"The history of our previous foreign policies reflects that we have never bothered to understand our neighbours. Our foreign policy has largely been driven by romantic ideas. We need to shed this and adopt a mature and pragmatic approach," said Madhav.

Speaking on Indo-China relations, Madhav noted that the obsession of people in India has now gradually shifted to India-China relationship from India-Pakistan ties; and that maintaining a good relationship with China is the government's priority.

"China is our important neighbour and we want to strengthen our ties with it. With the strong leadership of both our Prime Minister Narendra Modi and Chinese President Xi Jinping, I am hopeful we will be able to settle our differences," he asserted. However, Madhav cautioned that the Doklam dispute with China was not over.

"China is our important neighbour and we want to strengthen our ties with it. With the strong leadership of both our PM Narendra Modi and Chinese President Xi Jinping, I am hopeful we will be able to settle our differences," Madhav said, asserting: "We deployed mature diplomacy together with strong ground posturing. Having said that, Doklam is not over yet."

"I believe the path chosen by His Holiness the Dalai Lama of engaging with Chinese leadership to have meaningful, beneficial and acceptable settlement relationship for the future of Tibet with China is the best available option today," he further added.

"We have great respect to Tibetan living in exile. Government of India is extending all support for Tibetans. Although at the moment, it is between the Central Tibetan Administration and China. Whenever there is required, Indian Nation will stand up for Tibet," he said.