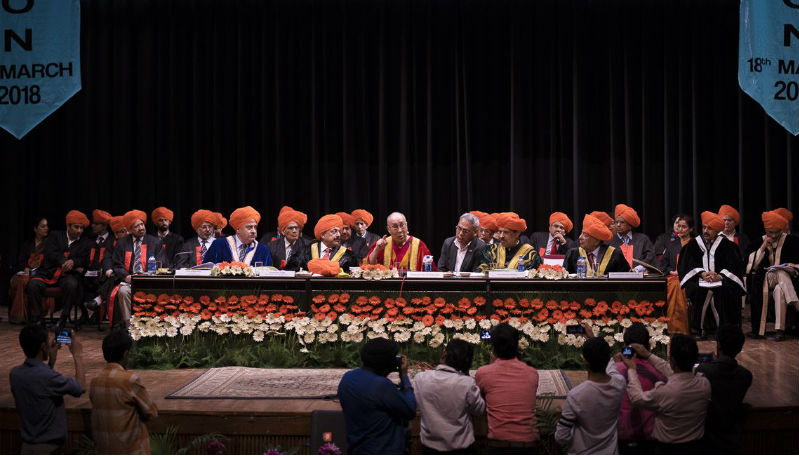 His Holiness the Dalai Lama delivering the convocation address at the First Convocation of the Central University of Jammu in Jammu, J&K, India on March 18, 2018. Photo by Tenzin Choejor

Jammu, J&K, India — “The only way to create a peaceful world is to solve problems through dialogue based on a respect for others’ rights and views," His Holiness the Dalai Lama said, adding: "Unless we limit the use of force and the development of nuclear weapons the 21st century will become a century of disaster."

His Holiness' comment came during the First Convocation of the Central University of Jammu in Jammu, J&K, India on March 18, 2018. His Holiness was the Chief Guest at the university’s first convocation. He was received on arrival at the Gen Zorawar Singh Auditorium by the Vice-Chancellor, Prof Ashok Aima. He was then escorted to where faculty and guests were putting on academic robes, prior to taking part in the academic procession into the Convocation Hall. Proceedings commenced with the National Anthem, an Invocation Prayer sung by students and the Registrar’s declaration that the convocation was open. The Vice Chancellor read a report of the University’s achievements since it began functioning in August 2011 up to the present.

Candidates awarded Ph.D, M.Phil., and Post Graduate Degrees came up to the stage to receive them, followed by recipients of the degrees of various schools.

The first Honoris Causa Degree was granted to Dr Jitendra Singh, a politician with strong links to Jammu where he was born, who is currently Minister of State for the Development of North Eastern Region, Prime Minister’s Office, Personnel, Public Grievances and Pensions, Department of Atomic Energy and Department of Space. In his gracious acceptance speech he noted that when he had been offered such honorary degrees in the past he had tended to decline them, but accepted on this occasion because of his affection for Jammu and his strong connections to the University. He mentioned that since it strengthens a university to offer specialized opportunities, he had recommended that the Central University of Jammu establish a Department of Space.

The second Honoris Causa Degree was granted to Gen Nirmal Chander Vij, former Chief of the Army. In humble words of acceptance the General saluted the students in the Hall who hold the future of India in their hands and declared that he belongs to Jammu and takes pride in it.

After His Holiness had taken part in presenting Gold Medals and Merit Certificates, he was invited to give the convocation address. He began by seeking permission to speak from his seat rather than from the podium because although mentally sharp and alert he felt physically weary.

“Brothers and sisters, young students who have received your degrees. You are the future of the world and the future of India. I generally make a distinction between the generation of the 20th century to which I belong and your generation of the 21st century. The 20th century was spoiled by violence and war. The question which may be asked is did this violence and even the use of nuclear weapons bring about a better world and I think the answer is ‘No’. 200 million people, by some accounts, died violently. What we can see is that no matter how good your motivation or how upright your goals, once you resort to violence and the use of force, the consequences are unpredictable.

“In this 21st century, India must contribute to creating an era of peace, not just through prayer but by taking action. This century should be an era of dialogue. We will always come across differences between us, but trying to solve such problems through the use of force just starts a chain reaction of violence and counter violence. We can see this in the Iraq crisis. I know President George Bush as a warm human being for whom I have great affection. After the September 11th tragedy I wrote to him expressing my condolences and the hope that any response would be non-violent. Ultimately, with a good motivation, the wish to bring democracy to Iraq, he went to war with that country with far-reaching negative consequences for the entire Arab region.

“The only way to create a peaceful world is to solve problems through dialogue based on a respect for others’ rights and views. Unless we limit the use of force and the development of nuclear weapons the 21st century will become a century of disaster.

“The 7 billion human beings alive today all want to be happy. None of them wants to suffer or put their lives at risk. If we ask, what is basic human nature? There are scientists today who say it is compassion. They show that even before they can speak, infants show a preference to the helpful rather than those who are obstructive. Experience corroborates another scientific finding that constant anger and fear eat into our immune system, while a calm mind and warm heart are good for our health. All human beings start their lives nurtured by their mother’s loving kindness—even those who later become trouble-makers. That our basic human nature is compassionate is a sign of hope.