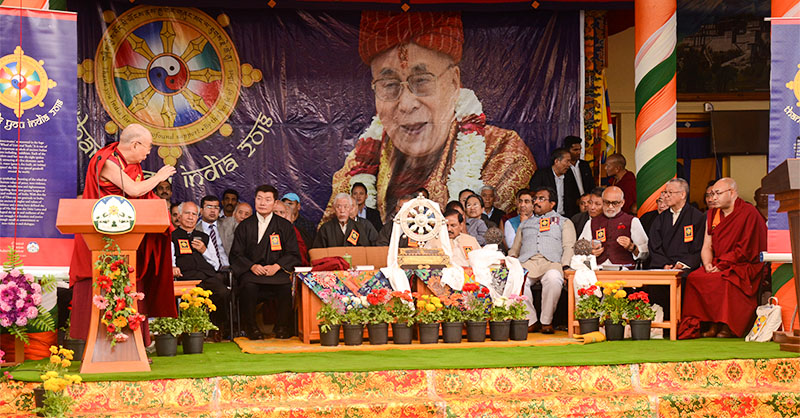 His Holiness the Dalai Lama speaking to the public at the "Thank You India" event at the Tibetan temple in Dharamshala, India, on March 31, 2018. Photo: TPI/Chonyi Sangpo

Dharamshala, India — I do not know for how long the Tibetan struggle will go on. However, the struggle will remain alive as long as the spirit of Tibetans remains,” the spiritual leader of Tibet, His Holiness The Dalai Lama said at the “Thank You India” programme, held at the main Temple in Dharamshala, India, on Saturday to mark his arrival in India, exactly 60 years ago.

While interacted with members of media, His Holiness the Dalai Lama, when questioned about the possibility of Tibetans returning to their homeland one day, replied that Tibetan issue is an issue of justice. While commenting on the equation between India and China, he said that both were most populated countries of the World and both have ability to destroy each other.

“Any sensible person would want ‘Hindi-Chini Bhai Bhai’ to live together. None of them can be disloyal to each other, so other things will go on by the side,” he said. “Confrontation does not yield any result and amicable solution of Tibet problem is the only way out,” the Nobel Peace Laureate said.

“The Chinese are following a socialist form of government, which means everybody should have equal rights. We are not demanding separation from China but the Tibetan people should have the autonomy to preserve their culture, language, environment and religion,” he added.

Earlier, the Dalai Lama recalled his journey in exile. He said that no time was wasted in these years. “It is a matter of pride that Tibetans have preserved their tradition and culture, wherever they are living across the globe,” he said.

He said that as there was need to preserve Tibetan culture and language, a logical analysis was also the need of hour. “When everybody is praising Tibetans it becomes our responsibility too to check where we were lacking,” he said.

In 1959, His Holiness the 14th Dalai Lama along with thousands of others escaped to India, where he was given political asylum. The spiritual leader has set up a Government in-Exile and rebuilt monasteries where masters pass on their teachings to young monks. Tibetans in exile have succeeded in gradually rebuilding their monasteries, preserving their culture and restructuring their society and keeping it alive, in spite of the extremely difficult circumstances.