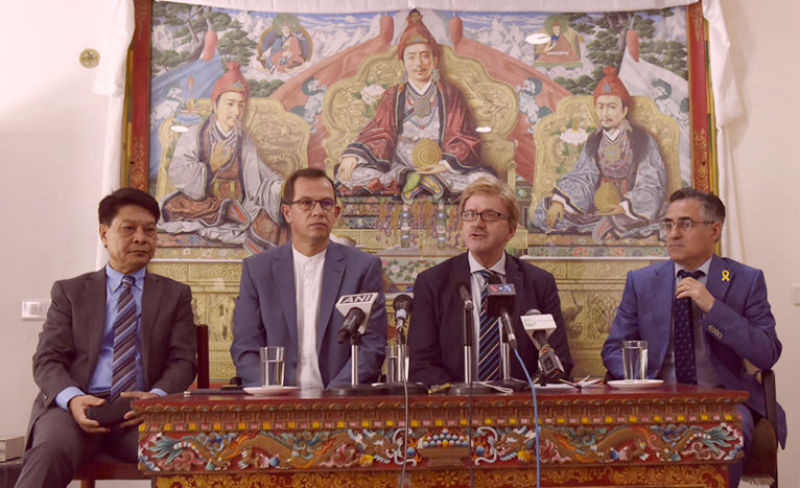 Dharamshala, India — Condemning China’s re-education policy and the suppression of minority languages, the delegation of the European Parliament expressed strong support for the Middle Way Approach which merely seeks genuine autonomy for Tibet.

The MEP’s comments came a day after President Dr Lobsang Sangay called on EU and EP to officially support the 'middle way policy', which is the official stand of the exile Tibetan government.

The delegation led by MEP Thomas Mann held the press conference at the headquarter of the Central Tibetan Administration in Dharamshala, India, on Thursday. Speaking about the delegation’s audience with His Holiness the Dalai Lama, Thomas Mann expressed support for the CTA’s Middle Way Approach which seeks genuine autonomy for Tibet.

“Yesterday we had the opportunity to meet His Holiness the Dalai Lama on a very special day, as the 9th of May is Europe Day. During the meeting, His Holiness expressed admiration at the European way of life that espouses freedom, justice, human rights, and Europe’s expression of solidarity with the sufferings of the so called third world countries,” he said.

Expressing support for the Middle Way Approach, the MEP condemned China’s re-education policy and the suppression of minority languages. “We follow the Middle way Approach of His Holiness and we are against the so-called re-education policy in China. We protest the Chinese government’s suppression of minority languages and support the use of your language, culture and other opportunities to survive.”

MEP Csaba Sogor, in his address, urged Tibetans to be prepared for the long term future which he said is more important than short term future. “I come from a former communist country and I am familiar with China’s policies towards minorities,” he said.

“Europe itself is in a difficult period. While some countries are leaving, some are complaining within the EU. At such a time, there are people asking us why are we not in Europe at this time? And I told them; sometimes the best way to express solidarity and compassion is by meeting His Holiness the Dalai Lama and receive his wisdom. We appreciate His Holiness’ struggle for the freedom of the Tibetans, and I hope that the politicians as well as simple citizens of EU member states would listen to him,” he said.

He also spoke about the countries in the former soviet bloc’s unpreparedness in the post-1989 period following the disintegration of the Soviet Union.

“We should be prepared for a scenario when the Chinese communist system will disappear. And to contribute towards preparing for such a scenario, my office hire trainees to understand the European Union. I have already hired few Tibetans as interns at my office and I will continue to do so,” he said.

MEP Ramon Tremosa expounded the importance of freedom for every individual in the world and said that everyone has a duty to ensure freedom around the world.

“As MEP Thomas Mann said Europe is a beacon of democracy, peace, and human rights. It does have a violent history but after 1945, Europe has become an example to others of economic cooperation and integration. The European Union is not perfect. It has problems with minorities among others. But we enjoy a level of freedom that is not available in other countries,” he said.

“After visiting the Tibet Museum yesterday, we experienced a full picture of the Tibet story especially about the people who died because of the Chinese occupation and the traumatic journey of people who came from Tibet to escape Chinese persecution,” he noted.

“The experience that I got from visiting the museum made me realize that I am not a free person if any person in any part of the world is facing injustice or for whom freedom is forbidden or human rights is denied. So, I am not a fully free man if Tibetans cannot be free,” he said.

Expressing his support for the Tibetan movement, he said: “When people are not given equal rights to pray, practice their language and to preserve their culture, we have to say something. If we don’t say something now, the same thing can happen to someone else in another part of the world.”

Speaking to reporters following the press conference, Representative Tashi Phuntsok from OOT Brussels, said: “The world is going through profound changes in terms of international relations, economic conditions and the global order.”

“These global developments have ushered a new dynamic in EU-China relations particularly due to the current superpower’s reluctance to shoulder responsibility towards global leadership and China’s emergence as a leading super power,” he said.

“In light of these developments, the Tibet issue is going through a crucial period. Keeping this background in mind, the visit of this EU parliamentary delegation to Dharamshala, the seat of His Holiness the Dalai Lama and the Central Tibetan Administration, is an expression of continued support to Tibet. This also signifies the European Parliament’s attention on Tibet amidst all this global developments and the rise of China as a potential super power,” he said.