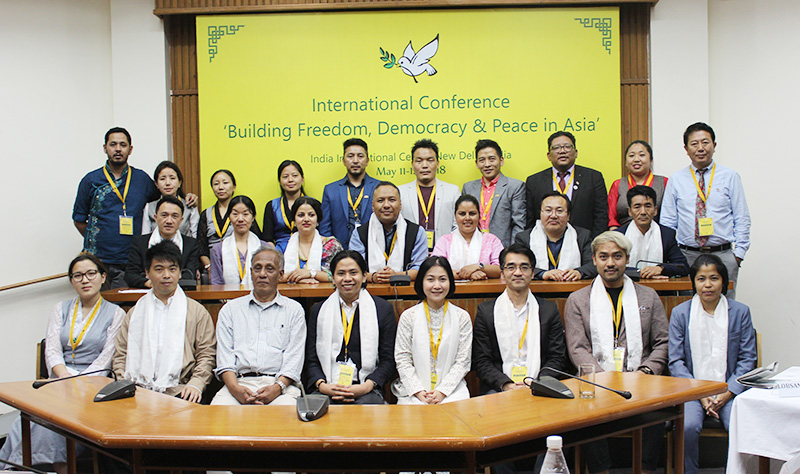 The 1st International Conference on ‘Building Freedom, Democracy and Peace in Asia’ was held from May 11 – May 12, 2018 at the India International Center in New Delhi India. Photo: TPI

New Delhi, India — A two-day International Conference concluded at the India International Center in New Delhi India, on May 12, 2018, after discussing strategies to promote and build freedom, democracy and peace in the Asian region.

Delegates in calling on China to take immediate action to ensure freedom, human rights and self-determination for the people of Tibet and other regions in Asia.

The topics of the conference were “Building Freedom, Democracy and Peace in Asia”. The delegates from Hong Kong, India, Japan, Myanmar, Nepal, Philippines, Southern Mongolia, Taiwan, Thailand, Tibet and Vietnam participated in the conference. The Conference was organized by the Tibetan Youth Congress from 11-12 May 2018 in New Delhi, India.

The TYC said that "The objective of the Conference is to bring like-minded social activists, civil society organisations, youth leaders, journalists, scholars, and stakeholders together to achieve the common goal of bringing freedom and democracy based on universal values of human rights."

A joint statement issued at the conclusion of the conference states: "After two days of constructive discussions, delegates have come to a consensus that, people and nations of Asia must play an active role in promoting and supporting true voice of human rights and freedom across the region."

"Issues and concerns presented are in conformity that the universal human rights and freedom are at stake across Asia. The delegates strongly condemn the destructive policies and oppressive regimes," the statement reads.

"The delegates noted that this year is the 70th anniversary of the Universal Declaration of Human Rights and 25th anniversary of Vienna Conference on Human Rights, emphasizing the link between freedom, human rights and democracy," it said, adding: "The delegates also recognize the commitment to protect and safeguard environment and ensuring sustainable development for all."

"The conference calls upon the government of China to take immediate action to ensure freedom, human rights and self-determination for the people of Tibet, Taiwan, Hong Kong and stop their aggressive policies that are expansionist and interfering in nature on neighboring countries like Taiwan, Vietnam, Thailand, Philippines, Japan, Myanmar, Nepal and India," it further stated.

"The delegates recognize that inspirations drawn from the Sunflower Movement, Umbrella Revolution and other resistance movements around the world have motivated a new generation of activism," the statement added.

Finally it stressed that "The delegates call upon the governments around the world to proactively uphold universal principles of human rights, freedom, and democracy policies and highlight the need to strengthen ties within the regional groups."