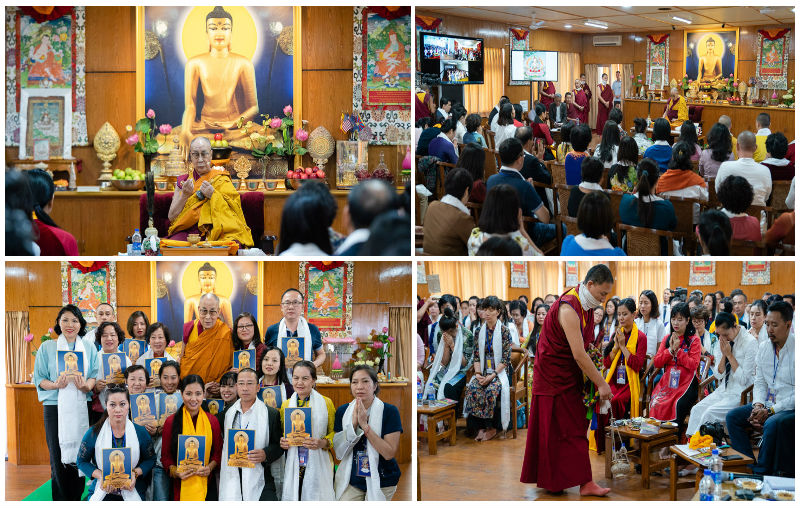 His Holiness the Dalai Lama with a group of devotees from Vietnam at his residence in Dharamsala, HP, India on May 22, 2018. Photo by Tenzin Choejor

Dharamshala, India —Speaking to a group of Vietnamese devotees, including business leaders, artists, intellectuals and members of youth delegations for a second time, His Holiness the Dalai Lama said "Everybody has an equal right to be happy", even the 7 billion human beings alive today can be categorized into three groups that includes non-believers.

His Holiness the Dalai lama offered the White Manjushri Empowerment on the second day of his meeting with groups from Vietnam at his residence in Dharamshala, HP, India on May 22, 2018. First of all he undertook the preparatory ritual for a White Manjushri Permission, while members of the audience recited the mantra of Buddha Shakyamuni.

"The 7 billion human beings alive today can be categorized into three groups," His Holiness explained, "one that does not pay much attention to inner values, another that considers religion to be negative and one that has respect for spiritual practice. Everybody has an equal right to be happy, however, it seems that when faced with difficulties or desperate circumstances, people who have the support of religious belief find it easier not to lose hope.

"Jainism, one branch of the Samkhyas and Buddhism do not believe in a creator. Apart from Buddhism, all other religious traditions accept the notion of an independent, permanent self, or atman. The Buddhist theory of dependent origination means this idea of an independent self is untenable.

"The Buddha taught that things do not exist as they appear. Later, four major schools of thoughts evolved within Buddhism, each of which explains the four noble truths, the two truths and the concept of selflessness, but among them all it is the Middle Way (Madhyamaka) presentation that is most scientific."

His Holiness also explained that understanding emptiness is essential to the attainment of liberation and enlightenment. He further pointed out that the real source of suffering is maintaining an extreme self-centred attitude and the misconception of an independent self. He explained how a sense of concern for others helps counteract anger.

Clarifying why the realization of emptiness is related to Nirvana or liberation, His Holiness cited Nagarjuna's ‘Fundamental of Wisdom':

As the tactile sense [pervades] the body
Confusion is present in them all.
By overcoming confusion you will also
Overcome all disturbing emotions.

When dependent arising is seen
Confusion will not occur.
Thus every effort has been made here
To explain precisely this subject.

After completing this overview of the Buddha's teachings, His Holiness gave the permission of White Manjushri, which he reported having received from Tagdrak Rinpoche when he was still young in Tibet. At the end, he asked the Vietnamese to recite the Heart Sutra in their own language. As the session came to an end, he assured the group he would see them next year.