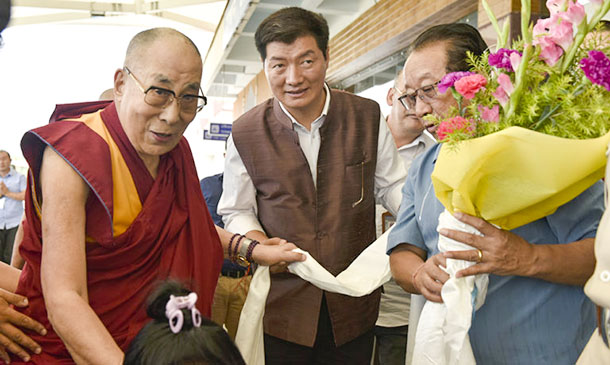 The visit also aimed at a series of teachings and public talks, particularly in the promotion of human value, human affection, compassion, secular ethics, and religious harmony. His Holiness will be back in Dharamshala on June 20, 2018.

In Vilnius, the capital city of Lithuania, His Holiness the Dalai Lama will confer a talk on Human Values in Education in the morning of 13 June. The talk is organised by the University of Vilnius. The next day on 14 June, His Holiness will confer another public talk on The Art of Happiness in the morning. The talk is organised by House of Tibet (Vilnius) at the Siemens Arena.

From 16 – 18 June, His Holiness the Dalai Lama will be in Riga, Latvia. In the mornings of 16 and 17 June, His Holiness will confer a teaching on Tsongkhapa’s In Praise of Dependent Origination (tendrel toepa) and Diamond Cutter Sutra (dorjee chodpa).

On 18 June, His Holiness will confer a Manjushree Empowerment (jamphelyang jenang). The teachings are jointly organised by Save Tibet Latvia, Save Tibet Foundation (Moscow) and Tibet Culture and Information Center (Moscow). All three teachings will be held at Skonto Hall in Riga.

According to his official website, His Holiness the Dalai Lama has three main commitments: the promotion of human values, religious harmony and understanding, and the preservation of the Tibetan Buddhist culture of peace and non-violence.