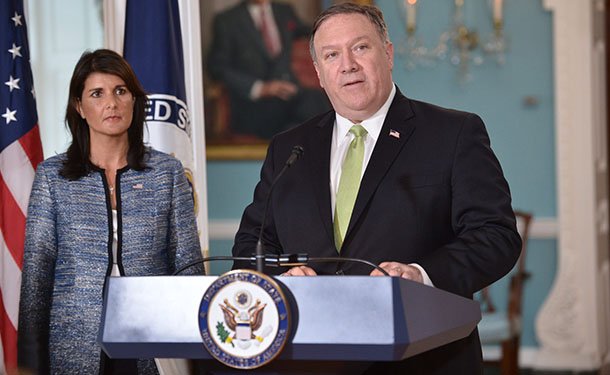 U.S. Secretary of State Mike Pompeo delivers remarks to the press on the UN Human Rights Council, at the U.S. Department of State in Washington, D.C., on June 19, 2018. [State Department photo/ Public Domain]

Washington DC — After more than a year of warnings and criticisms, the United States of America has announced that it is withdrawing from the United Nations Human Rights Council, strongly criticising the UNHRC for "Its membership includes authoritarian governments with unambiguous and abhorrent human rights records" sit on the Council, "such as China, Cuba, and Venezuela."

"There is no fair or competitive election process, and countries have colluded with one another to undermine the current method of selecting members," says Secretary of State Mike Pompeo. The comments came on Tuesday as Secretary Pompeo and UN Ambassador Nikki Haley making a joint-announcement from the State Department in Washington, DC, U.S, on June 19, 2018.

"The Trump administration is committed to protecting and promoting the God-given dignity and freedom of every human being. Every individual has rights that are inherent and inviolable. They are given by God, and not by government. Because of that, no government must take them away," Pompeo said while making his remarks on the UN Human Rights Council.

For decades, the United States has led global efforts to promote human rights, often through multilateral institutions. While we have seen improvements in certain human rights situations, for far too long we have waited while that progress comes too slowly or in some cases never comes. Too many commitments have gone unfulfilled," he stressed.

While explaining some of the main reasons for withdrawal from the Council, Secretary of State Mike Pompeo further added: "President Trump wants to move the ball forward. From day one, he has called out institutions or countries who say one thing and do another. And that’s precisely the problem at the Human Rights Council." As President Trump said at the UN General Assembly: “It is a massive source of embarrassment to the United Nations that some governments with egregious human rights records sit on the Human Rights Council.”

"We have no doubt that there was once a noble vision for this council. But today, we need to be honest – the Human Rights Council is a poor defender of human rights. Worse than that, the Human Rights Council has become an exercise in shameless hypocrisy – with many of the world’s worst human rights abuses going ignored, and some of the world’s most serious offenders sitting on the council itself," Pompeo said.

He strongly criticised the UN Human Rights Council saying "The only thing worse than a council that does almost nothing to protect human rights is a council that covers for human rights abuses and is therefore an obstacle to progress and an impediment to change. The Human Rights Council enables abuses by absolving wrongdoers through silence and falsely condemning those who have committed no offense. A mere look around the world today demonstrates that the council has failed in its stated objectives."

The US Secretary of State gave very important reasons that the UNHRC's "membership includes authoritarian governments with unambiguous and abhorrent human rights records, such as China, Cuba, and Venezuela. There is no fair or competitive election process, and countries have colluded with one another to undermine the current method of selecting members."

"And the council’s continued and well-documented bias against Israel is unconscionable. Since its creation, the council has adopted more resolutions condemning Israel than against the rest of the world combined," he added. US Secretary of State Mike Pompeo is right. It is not every year you will read those reports from the HNHRC. Regrettably, many critics and human rights groups have also accused the Council of being soft on human rights abusers such as China, North Korea, Cuba, and Venezuela.

They criticised the Council that the world’s most inhumane regimes and Human rights abusers like the totalitarian Communist regime in China continue to serve on and be elected to the council, letting them to escape scrutiny, and the council continues politicizing and scapegoating of countries with positive human rights records in an attempt to distract from the abusers in their ranks.

"The United States has no opposition in principle to multilateral bodies working to protect human rights. We desire to work with our allies and partners on this critical objective that reflects America’s commitment to freedom. But when organizations undermine our national interests and our allies, we will not be complicit," Pompeo said, adding: "When they seek to infringe on our national sovereignty, we will not be silent."

"The United States – which leads the world in humanitarian assistance, and whose service members have sacrificed life and limb to free millions from oppression and tyranny – will not take lectures form hypocritical bodies and institution as Americans selflessly give their blood and treasure to help the defenseless," he said.

"Ambassador Haley has spent more than a year trying to reform the Human Rights Council. She is the right leader to drive our efforts in this regard at the United Nations. Her efforts in this regard have been tireless. She has asserted American leadership on everything from the Assad regime’s chemical weapons use, to the pressure campaign against North Korea, and the Iran-backed provocations in the Middle East."

Finally, the US Secretary of State said that "Ambassador Haley has been fearless and a consistent voice on behalf of our ally Israel. And she has a sincere passion to protect the security, dignity, and the freedom of human beings around the world – all while putting American interests first. She has been a fierce defender of human rights around the world."