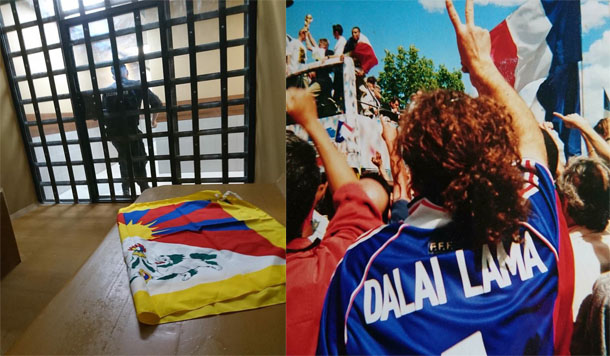 Hugues Picon with the national of Tibet inside the Luzhniki Stadium jail on July 15, 2018 and he was wearing a T-Shirt with "Dalai Lama," during the 1998 FIFA World Cup in France. Photo: TPI

Moscow, Russia — A French activist was detained by Russian police after sharing pictures from the semi final match between France and Belgium at the Saint Petersburg Stadium where he raised the Tibetan national flag and a T-shirt with "Tibet" on Tuesday.

Hugues Picon has been kept in the Russian police custody during the final match of the Moscow FIFA World Cup 2018 and has not been able to enter the Luzhniki Stadium for the final Match on Sunday.

During the semi final between France and Belgium, Picon raised the Tibetan national flag, in front of hundreds of thousands of people at the St. Petersburg Stadium on July 10, 2018. The Russian security personals later detained him and held him in custody until the end of the final Match day of the competition.

Picon who is a long-time Tibet supporter from France, have openly raised the national flag of Tibet from the stadium and also wrote that "Putin is afraid of His Holiness the Dalai Lama". He was arrested and detained in the Luzhniki Stadium jail in Moscow, for carrying the Tibetan national flag and wearing a French team jersey with “Dalai Lama” written on the back. Sources said that he has been released and sent to the French Embassy in Moscow, on July 15.

Unfortunately later during the period of the match, Picon updated through his Facebook account that he is not able to watch the match and asked his friends for the score while at the same time sharing the picture of Tibetan flag in Russian police custody.

'I will soon have no more batteries. I do not know why they arrested me. They say because I am activist,' wrote on Facebook. He then said "Putin is afraid of the Dalai Lama. Disgusted I miss the game. Proud because it's for our cause."

"Bravo Hugues Picon for this strong political defiance at the world’s biggest arena, and for highlighting Tibet to over a billion people. Thank you. Merci Beaucoup Frère," Jigme Ugen, a Tibetan activist and American union leader based in the United States wrote on Facebook.

France won the World Cup for the second time by ending hard-battling Croatia's dream of a first title with a 4-2 victory in an entertaining and action-packed final.

This is not the first time he has raised the national of Tibet and T-Shirt with "Tibet" and "Dalai Lama", when Picon was young, he was also wearing a T-Shirt with "Dalai Lama" at the 1998 world cup which was held in France. The tournament was also won by France, who beat defending champions Brazil 3–0 in the final.