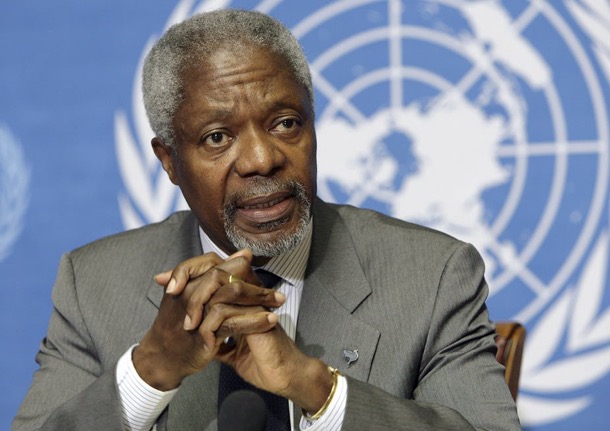 Dharamshala, India — Praising his dedication to creating a more just and peaceful world, the spiritual leader of Tibet, His Holiness the Dalai Lama has expressed profound sadness at the death of former Secretary General of the United Nations, Kofi Annan, who passed away on Saturday at the age of 80.

Following news of the death of former Secretary General of the United Nations, Kofi Annan, His Holiness the Dalai Lama wrote to his widow Mrs Nane M Annan to offer his heartfelt condolences.

In his appreciation of Mr Annan he wrote: “I admired the determination and the principles he brought to fulfilling his responsibilities as Secretary General of the United Nations, despite the many challenges he faced.

“Mr Annan’s dedication to creating a more just and peaceful world, particularly in his championing of human rights, was properly acknowledged when he and the UN were awarded the Nobel Peace Prize in 2001 for the way he had revitalized the organization.

“It was a mark of his genuine large-heartedness that even after his retirement from the UN, he continued to be active in seeking the resolution of conflict in different parts of the world.”

Mr Annan, 80, died in the early hours of Saturday in Switzerland after a short illness, according to a statement issued by his family. The Nobel Peace Laureate was the seventh Secretary-General of the UN from January 1997 to December 2006, and became the first black African man to take on the top job as the world’s top diplomat.

United Nations chief Antonio Guterres also voiced deep sorrow at the news his predecessor had passed away, calling him “a guiding force for good”. “Kofi Annan was a guiding force for good,” Guterres said in a statement shortly after news broke of Annan’s passing. “In many ways, Kofi Annan was the United Nations. He rose through the ranks to lead the organisation into the new millennium with matchless dignity and determination,” he added.