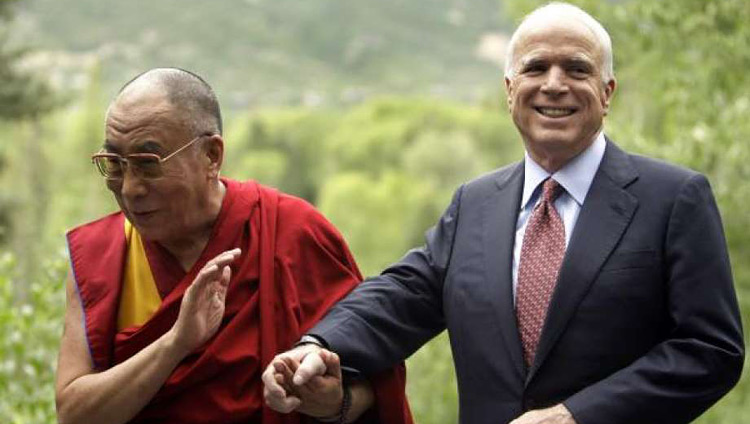 Dharamsala, HP, India — Spiritual leader of Tibet and President of Central Tibetan Administration on August 27 sent messages of condolences to the family of US Senator John McCain.

US Senator and 2008 presidential nominee John McCain died Saturday at age 81 after a year-long battle with brain cancer.

Promptly on learning of the passing away of Senator John McCain His Holiness the Dalai Lama wrote a letter to his wife, Mrs Cindy McCain, saying “I offer my condolences to you and all the members of your family at this sad time,” he wrote.

“I had the pleasure of meeting your husband in 2008 in Aspen after long admiring his many years of dedicated service to the American people," the Nobel Peace Laureate said, adding: “I appreciated his genuine concern for democracy, human rights and the environment in general and particularly in Tibet, for which I remain grateful.”

On the same day, Dr Lobsang Sangay President of Central Tibetan Administration expressed deep grief and condolences over the demise of US Senator John McCain, saying he had dedicated his flesh and bones for his country and the global cause of human rights. “America lost a true American hero. Tibetans lost a true supporter. And I lost a good friend.”

“John McCain knew what it meant to fight for human rights. He did not just read the words in a book but dedicated his flesh and bones for his country and the global cause of human rights,” reads the President’s statement.

“At a time when many world leaders shied away from meeting me as a representative of the Tibetan people, John always welcomed me with open arms. He was courageous as well as compassionate," President said.

“Though his wish to visit Dharamshala never came true, his steadfast voice for Tibet will continue to live on for us Tibetans in exile and inside Tibet," he continued.

McCain, a senator from Arizona for over three decades, had been battling glioblastoma, an aggressive brain cancer, discovered by his doctors in July 2017, and had not been at the US Capitol in 2018. He also had surgery for an intestinal infection in April.

One year of treatment failed to prevent his condition from worsening and on August 24 his family announced that he had chosen to discontinue medical care.

A statement from his office said, "Senator John Sidney McCain III died at 4:28 p.m. on August 25, 2018. With the senator when he passed were his wife Cindy and their family. At his death, he had served the United States of America faithfully for sixty years."