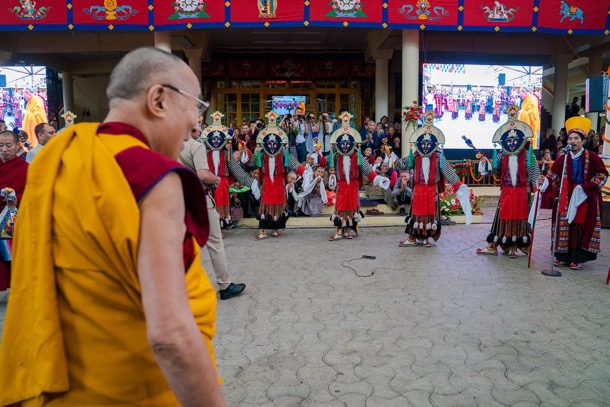 Members of the TIPA performing a short part of a traditional Tibetan opera as he makes his way to the Main Tibetan Temple in Dharamshala, HP, India on September 3, 2018. Photo by Tenzin Choejor

Dharamshala, India — Addressing the ceremony of long life prayer offering to His Holiness the Dalai Lama held in Dharamshala, India, the spiritual leader of Tibet reassured Tibetans and devotees around the world that he would live around hundred years.

His Holiness' comments came during an appearance at the main temple in Dharamshala, where hundreds of Tibetans, representing Tibet’s three traditional provinces as well as devotees from Kalimpong, Gangtok, Darjeeling and Ravangla offered long life prayers (Tenshug) to His Holiness, on September 3, 2018.

Thanking the participants and organisers, His Holiness the Dalai Lama praised the seventeen pandits of Nalanda for their logical way of teaching Buddhism as His Holiness claimed himself to be one of their biggest admirers.

“The only complete and detailed explanation of the ancient Nalanda teaching has persevered in the Tibetan language which is the reason why these days, people from China who are interested in learning Buddhism pay attention to learning the Tibetan language,” said His Holiness.

Speaking of the ancient Nalanda Buddhist teaching, His Holiness affirmed that the ancestors of Tibetan people had well preserved this knowledge for thousands of years which enabled Tibetans to expertise in promoting the knowledge in the Tibetan language.

His Holiness the Dalai Lama proclaimed that it is the duty of Tibetan people to continue the practical teachings of those ancestors while at the same time take pride in possessing such vast and profound knowledge passed by them.

“I respect all kinds of religious beliefs which only teaches love and compassion as the ultimate source of human happiness,” said His Holiness. He cited an example of how humans are born out of love and how they survive on love.

Meanwhile, drawing the attention of the gathering, His Holiness emphasised that the masters of Nalanda encourage its followers to approach their teaching with logic and reason rather than following it blindly. Thus, His Holiness urged the gathering to experiment and research on the teachings of those masters in light of reason.

His Holiness further urged the Tibetan people to preserve the rich Tibetan language as it has the potential to serve all the sentient beings on earth.

To the people gathered, His Holiness gave them assurance that he would live for hundred years to serve humanity and especially to lead the cause of Tibet under his guidance.

“As per your prayers and wishes, I assure you I would live around hundred years,” said His Holiness the Dalai Lama.