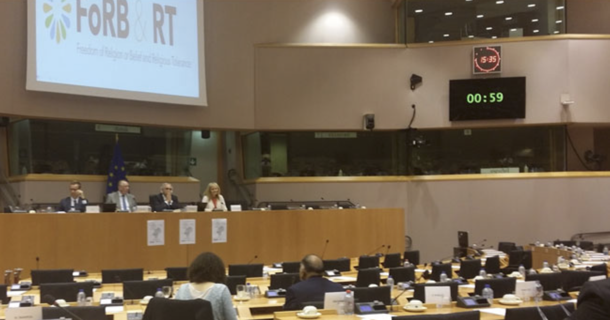 China is also ranked amongst the worst violators of Freedom of Religion or Belief and Religious Tolerance in the World. Photo: File

The report has also categorised China in the “Lowest Focalness” group denoting China’s lowest respect for Freedom of Religion or Belief. The assessment criteria of the Intergroup were “drafted on the basis of international law”, which in principle means that countries like China which is categorised as “severe violations” “are likely to be in breach of international law” where there are “systemic attacks against a person exercising Freedom of Religion or Belief.

China has recently published draft guidelines to regulate online religious information on the “chaotic” Chinese internet, aimed at maintaining “religious harmony” and prohibiting “illegal promotion of religion”. This is yet another infringement on the freedom of using the internet and the rights to practice religious expression.

The draft guidelines impose a ‘license system’ whereby organizations, institutions and venues involved in the dissemination of religious information or ideas online have to first obtain a license from provincial religious affairs department to conduct these activities. The guidelines also specify several eligibility conditions to obtain the license, of which the most important is that the applicant must be established within the territory of People’s Republic of China (PRC) and its legal representative or principal responsible person must be a Chinese citizen and a resident of mainland China. The license is granted validity only for three years. Overseas organizations or individuals are completely prohibited from engaging in any online religious information services in China.

As per these guidelines, no other organization or individual, other than the licensed ones, can preach or forward or repost or link ‘religious information’ on the internet, or conduct online religious education training, or live stream or record on the internet any religious activities such as worshipping of Buddha, burning incense, ordination, chanting, mass worship and baptism.

According to the guidelines, online religious information, as per the guidelines, refers to the religious teachings, knowledge, culture and religious activities promoted through internet sites, apps, instant messaging tools, live webcasts or any other social media platforms in the form of texts, pictures, audio and video messages etc.

The guidelines also go on to restrict the activities of the licensed organizations not permitting them to engage in any criticism of national and religious policies and regulations. Further, the guidelines prevent the organizations and individuals from raising any funds online in the name of religion. The draft guidelines published on China’s legislative information website has invited for comments until October 9, 2018.

These guidelines can be considered to be a part of China’s increasingly aggressive campaign against religious freedom within PRC. These guidelines add to the pretext of international criticism against China for the detention of nearly 1 million Uighurs in “re-education camps”. China has also repeatedly poked into the functioning of Christian churches with Beijing recently shutting down one of the largest house church in the country.

China’s oppressive religious policies against Tibetan Buddhists are also widely known and criticized now. China has taken over the administration of more than 1700 monasteries since 2011 through Democratic Management Committee (DMC) and also controls and regulates “reincarnation of living Buddhas” through “Order No. 5” and other similar laws in their constitution. China has even carried out the large-scale demolitions of Buddhist monasteries including the Larung Gar monastery, which was demolished first in 2016.

The already existing report by the European Parliament’s Intergroup has raised specific concerns about the “severe restrictions faced by Tibetan Buddhists in the country including outside the Tibet Autonomous Region (TAR).” The Tibetan Buddhists are “not free to venerate the Dalai Lama openly, to proselytise in public or meet in unregistered places of worship.” The destruction of the Larung Gar Buddhist Institute in 2016 was “Beijing’s desire to eviscerate the teaching and study of Tibetan Buddhism.” It further noted that the Chinese Government during 2016 has “repeatedly vilified the Dalai Lama and accused him of blasphemy and reinforced its restrictions against lawyers and human rights defenders” and also highlighted its concern of China using the new Counterterrorism law to “criminalise peaceful expressions of religious belief.”

It further raised concerns about the severe societal discrimination faced by Uighur Muslims and Tibetan Buddhists in employment, housing and business opportunities and that the Government of China physically abuses, detains, arrests, tortures, sentenced to prison or harasses adherents of both registered and unregistered religious groups for activities related to their religious beliefs and practices. It has reported the documented pieces of evidence that “at least 65,000 organs each year are extracted from prisoners of conscience, primarily Falun Gong prisoners (and) are sourced for wealthy Chinese citizens and foreigners.”

The intergroup presented the report to the European Parliament and has recommended the European Union (EU) to “use its dialogue with China to raise concerns about the deteriorating situation.” In the light of the pending negotiation process between EU and China on the Comprehensive Agreement on Investment, the Intergroup has recommended that “EU should ensure that a chapter on human rights includes a meaningful dialogue between the EU and China on the promotion and protection of human rights and fundamental freedoms as laid down in international human rights instruments.”