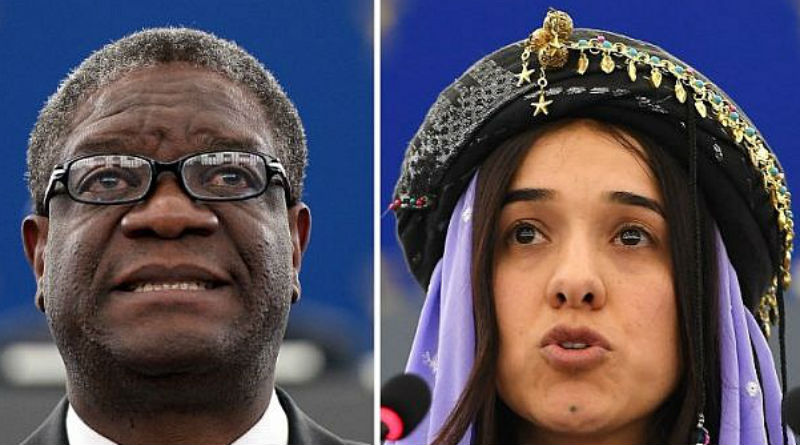 His Holiness the Dalai Lama hailed the award of the 2018 Nobel Peace Prize to Nadia Murad and to Denis Mukwege for their work against “sexual violence as a weapon of war and armed conflict.” Photo: File

Dharamshala, India — Tibetan spiritual leader and Nobel laureate His Holiness the Dalai Lama congratulated Ms Nadia Murad from Iraq and Dr Denis Mukwege from Congo for being awarded this year’s Nobel Peace Prize for their dedicated efforts to end the use of sexual violence as a weapon of war.

“This award is recognition of the formidable courage, determination and resilience you have shown in the face of great adversity to help and support fellow human beings, who have endured appalling pain and trauma. You have put compassion into action for which I commend you both. Working as you have to restore the wellbeing of others in need demonstrates the strength of compassion,” His Holiness wrote in his congratulatory letter.

“I have great admiration for brothers and sisters like you who unflinchingly reach out to give comfort and protection to those in dire need of help.”

His Holiness expressed that he looked forward to working with them in a common effort to work towards making this world a better place for everyone. The 2018 edition of the Nobel peace prize was conferred upon two campaigners against rape and sexual violence in war-torn regions. The winners selected from 331 candidates were announced in the Norwegian capital Oslo on Friday.

Murad is a Yazidi woman from the northern Iraqi town of Sinjar, who was held as a sex slave by ISIS. In 2016, she was made a UN goodwill ambassador for the dignity of survivors of human trafficking. She later emerged at the forefront of the campaign to free the Yazidi women like her. "For myself, I think of my mother, who was murdered by DAESH [IS], the children with whom I grew up, and what we must do to honour them. Persecution of minorities must end,” Murad said.

Dr Mukwege, known as ‘Doctor Miracle’, a gynaecologist and surgeon, has long worked to treat thousands of women and girls affected by rape and sexual violence in the Democratic Republic of Congo. He is said to have treated about 30,000 rape victims, many of whom sustained horrific injuries of rape perpetrated as a form of weapon. "This Nobel prize is a recognition of the suffering and the failure to adequately compensate women who are victims of rape and sexual violence in all countries around the world," he stated.