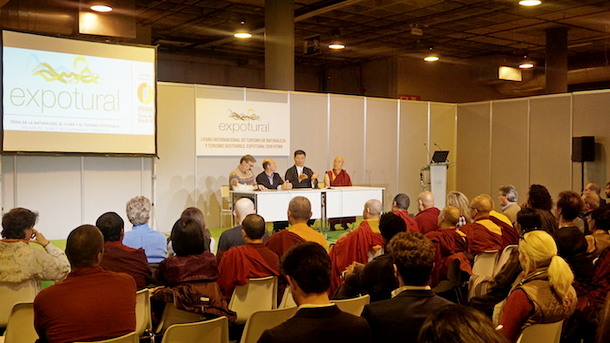 Madrid — Speaking on Tibet’s environment and its global significance at Expotural 2018, in Spain's central capital Madrid, President Dr Lobsang Sangay Thursday said that China is using the "giant pandas" of Tibet as it's "diplomatic symbol with other countries" - However, the "giant panda" actually is "a Tibetan bear." Tibetan President's speech was well received with thunderous applause and was followed by a question and answer session.

Dr Lobsang Sangay, President of the Central Tibetan Administration attended the opening ceremony of Expotural 2018, the Mountain and Sustainable Trade Fair at the IFEMA (International Trade Fair of Madrid), on November 1, 2018, according to Tenzin Dechen, Communication Officer for the Sikyong Office. President was invited to speak on Tibet’s environment at the Expotural 2018. Venerable Thupten Wangchen, Member of the Tibetan Parliament in Exile led the prayer session of the trade fair.

Chinese exhibitors attending the trade fair immediately pressured the Expotural and the IFEMA to withdraw the invitation extended to President Dr Sangay and MP Ven Thupten Wangchen. When the organizers refused, the Chinese exhibitors withdrew from the IFEMA 2018.

With 30 years of experience in staging trade fairs, IFEMA’s activity as a show organiser has made it the number one operator in Spain and one of the leaders in Europe. The financial effects of IFEMA’s activity on the city and region of Madrid as a driver of business tourism account for 2 billion euros a year, roughly 1% of the region’s GDP, and some 40,000 direct and indirect jobs.

The Expotural is a tourism trade fair that exalts the mountains and natural spaces of the planet and prides itself as the last legacy of Edmund Hillary. Its prime mission is raising awareness about the conservation of our planet.

In his speech, President Dr. Sangay at the foremost thanked the organisers and especially the Mayor of Madrid Manuela Carmena, he said, “At a time when many world leaders shy away from meeting me due to Chinese pressure, you have so courageously invited me to speak here at this event. I thank you for having me here. Tibetans all over the world salute your moral standing.”

On Tibet’s environment, President Sangay started off with describing the unique relationship Tibetans shares with the physical environment. He said, “For centuries, Tibetan nomads on the Tibetan Plateau cherished a lifestyle where they could freely move across the grasslands with their tents and livestock, and practice environmental stewardship. Our ancestors’ intimate relationship with the environment was so deep that when growing up in-exile in India, our elders would advise us, children, not to pluck flowers. They would say that plucking a flower is no different from causing harm to another person.

“Similarly, some tourists who have visited Tibet complained to me that they could not drive on the main road in Tibet because local Tibetan families, including children, blocks the road in order to pick up insects from the road and place them in the grass nearby so that they are not killed.”

President Sangay further related this to Buddhism by saying, “as Tibetan Buddhists, we believe in the principle of interdependence. We define ourselves by the land and the sacred places that shape our world. In today’s day and age where the “I” is so important—from the iPhone to the iPad to selfies—”I” as a singular entity, however, does not exist in Buddhism and is defined by nature and the environment you live in. It’s no wonder that Buddha was born under a tree, achieved enlightenment under a tree, gave his first teaching under a tree, and later passed away under a tree.”

President Sangay then briefed the audience on the serious threats the plateau of Tibet is currently facing. He first commented on the threats faced by the nomadic community in Tibet especially the forced resettlement of nomads caused by China’s increasing developmental projects in Tibet.

“According to the 2007 UNDP report, Tibet’s grasslands are turning into deserts at a rate of 2,330 sq km per year. Despite the widespread resentment it has caused, China is vested in gaining access to the nomadic lands for the extraction of resources. This brings us to the question of why China invaded Tibet. It is not a coincidence that in Chinese, Tibet is called Xizang, which literally means “Western Treasure.” One of the precise reason for China invading Tibet.

“It is estimated that the Tibetan Plateau holds about 30 to 40 million tons of copper reserves, 40 million tons of zinc, and several billion tons of iron. The Yulong copper mine has a proven more than 7.8 million tons—making it the second largest copper mine in Asia. Tibet also holds more than 90% of China’s lithium reserves. Local Tibetan communities enjoy no benefits from the extractions, while Chinese companies continue to strike it rich in Tibet.

He added, “Made in China cell phones are cheap because Tibetans are not compensated for the resources which belong to them. Local Tibetans are denied their fundamental right to determine how their economic resources should be utilized. The mining operations are carried out without the local Tibetan people’s consent, involvement, and in some cases, even without their knowledge.”

President Sangay stressed the importance of Tibet’s ecology globally by citing scientists at San Francisco University who said that the study of climate change is not possible without studying Tibet. Similarly, according to Canadian environmentalists, whether the weather in Canada will be warm or cold depends on the climate in Tibet. The Monsoon season in Asia is generated and regulated by the Tibetan Plateau.

“Furthermore, scientists have designated Tibet as the Water Tower of Asia. Around 1.4 billion people in Asia—that’s one-third of the world population—depend on water from Tibet,” the President declared.

In conclusion, President Sangay humorously remarked on China’s diplomatic symbol; the giant panda. He said, “Who doesn’t love pandas? China uses pandas as a diplomatic symbol with other countries. However, the giant panda is a Tibetan bear. The biggest panda lab is located in the north of Sichuan and Tibetans surround 75% of the lab. So, next time you see a giant panda at the local zoo here, please remember that it is a friend from Tibet. I have read reports that the oldest panda fossils were discovered in Spain, suggesting that the origin of the giant panda lineage may be located in Spain. It looks like Spain and Tibet’s bond is a lot stronger than any of us imagined.”