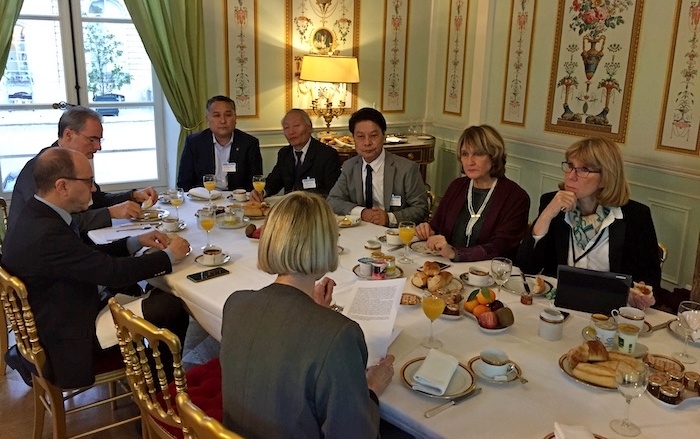 The discussion began with the presentation of a power point and short paper on Tibet by Buffetrille. The presentation included past and present images of Tibet and was followed by a debate and Q&A discussion. During discussion, Representative Phuntsok noted that Buffetrille’s presentation made very clear that the Chinese occupation of Tibet intended to revolutionize Tibetan ideology much more than the occupation’s stated goal of civilizing and supporting Tibetans and their economy.

Representative Phuntsok observed that the commercialization of Tibet by China had overtaken Tibet’s traditional values and core identity. “Tibet today is second least free after Syria and that it is said that there are far more surveillance cameras than windows in Lhasa. 153 Tibetans have immolated in Tibet for lack of freedom.”

Senator Gattolin raised multiple issues during the discussion, one of which being his experience with China’s repeated denial of visas to the French Senate Group in order to visit Tibet. He also questioned the extent and intensity to which mining and environmental degradation are taking place in Tibet, and whether China is guilty of genocide in Tibet. Sen Gattolin is an established supporter of Tibet in the Senate and has visited Dharamshala many times. He has worked closely with Tibetan Representative Phuntsok, quoted above, in the past.

Deputy President Picard reflected on her reading of recently deceased Palden Gyatso’s work. Gyatso was a Tibetan Buddhist monk and former political prisoner who was arrested for protesting and spent 33 years in Chinese prisons and labor camps where he was tortured extensively. She was staggered by what she learned of the suppression of Tibetans under Chinese occupation and expressed that she was unconvinced of whether China has made any positive contribution to Tibet.

The day prior to the study discussion, Representative Phuntsok called on Patrizianna Sparacino-Thiellay, Ambassador for Diplomatic and International Relations in the Paris Mayor’s office, to host a meeting with the goal of rekindling old ties between Paris and Tibet. During the meeting, Phuntsok recalled Hotel de Ville’s [city hall] relations with His Holiness and Tibet, referencing the 1992 reception of His Holiness the Dalai Lama by the mayor of Paris at the time, Jacques Chirac.

Multiple visits in 2003 by His Holiness to Mayor Bertrand Delanoe were also cited, as well as a recollection of His Holiness’ admiration for the EU’s vision and central values. Phuntsok also discussed the positive role that officials of the Tibetan community in France have played in the promotion and preservation of Tibetan culture through activities done in France.