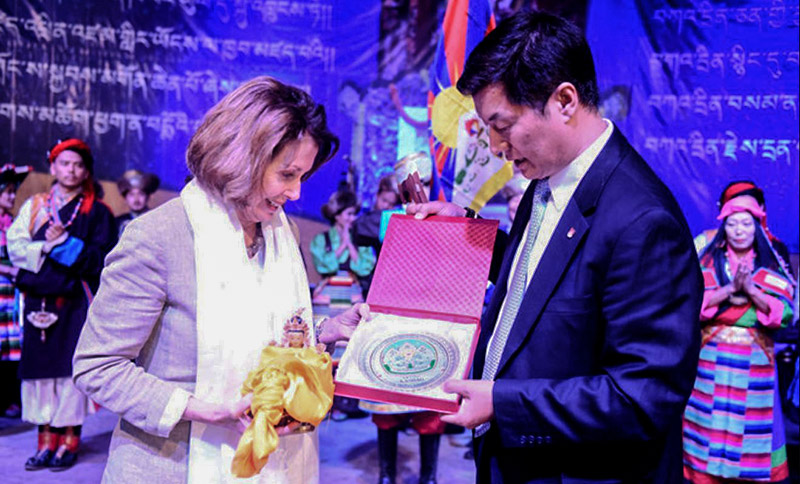 Dharamshala, India — Tibetan President Dr Lobsang Sangay congratulated Nancy Pelosi for being elected as the Speaker of the House of Representative for the third time. First elected in 2007, Nancy Pelosi remains the only woman to ever serve for this role. She is currently in her 17th term as a Member of the House of Representatives, following her first election in 1987.

In his message, Dr Lobsang Sangay - President of the Central Tibetan Administration expressed his admiration and applauded Nancy Pelosi for being a fearless leader. “I, on behalf of the Central Tibetan Administration heartily congratulate you on being elected Speaker of the House for the second time. Your election is a reflection of your leadership, integrity and the sharp relevance of your voice as a champion of American ideals,” said President Dr Sangay. “Your political and moral leadership and commitment towards issues including human rights at home and abroad is a legacy and inspiration to all of us. “

“Your victory is the victory of people in Tibet and people around the world who are denied their basic human rights,” Dr Sangay said, adding: "Speaker Pelosi is a staunch supporter of the Tibet cause and a fierce advocate of peace and non-violence."

In a statement delivered on the 59th anniversary of the Tibetan Uprising Day, Pelosi said, “If we do not speak out for human rights in Tibet because of economic concerns, then we lose all moral authority to talk about human rights in any other place in the world.” She led a congressional delegation to Tibet in 2015 and to Dharamsala twice with the last visit in 2017.

“This is a ray of great hope for the peoples of the world that believes in peace, equality, justice and basic human freedom as you have been an icon of such virtues.”

He added, “I take this opportunity to thank you very much for your unwavering support and commitment towards the just cause of Tibet in the past many decades. I would also like to express here our deep gratitude to you, your colleagues and the Government of the United States of America for the recent outcome of the H.R. 1872-Reciprocal Access to Tibet Act-2018 and the Asia Reassurance Initiative Act with special reference to Tibet.”

Pelosi carried 220 of the 235 Democrats in the House. There are also 199 Republicans, with one vacancy in a contested North Carolina district. A number of Democrats voted against Pelosi, including some of the far left wing of the party, who had called for new leadership in the caucus. Pelosi reportedly, however, ensured her election by agreeing to limit her tenure to no more than four years in the chamber’s top spot. Pelosi, who drew a standing ovation, swore into office a record number of women – 102 women in the House – which have changed the face of Congress and made up nearly a quarter of the voting membership.