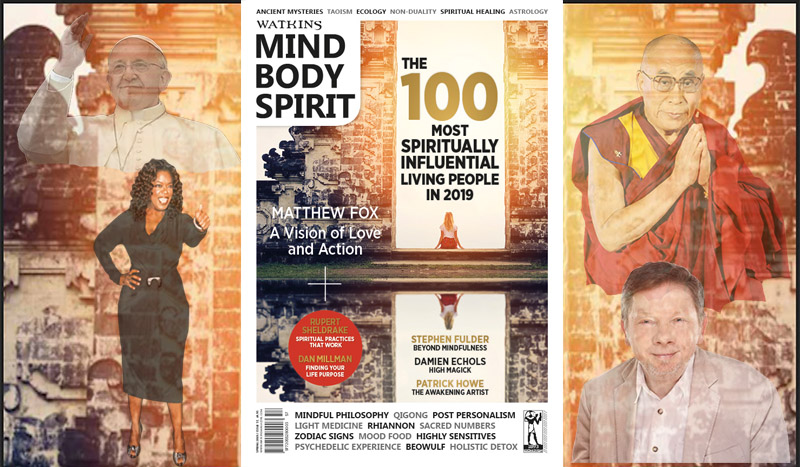 Dharamshala, India — The spiritual leader of Tibet, His Holiness the Dalai Lama is ranked 3rd in the list of Watkins magazine’s 2019 ‘Most Spiritually Influential Living People’. The Nobel Peace Lureate was not only named as one of Watkins' Mind Body Spirit magazine's "100 Most Spiritually Influential Living People, but the magazine ranked him as one of the top three over the years.

"We are delighted to share with you Watkins’ 2019 list of the 100 Most Spiritually Influential Living People – spiritual teachers, activists, authors and thinkers that change the world," said the Watkins Mind Body Spirit magazine.

The London based Watkins Mind Body Spirit magazine features His Holiness the Dalai Lama ranked 3rd in the "2019 Spiritual 100 list" with the head of the Catholic Church Pope Francis and American TV and media mogul Oprah Winfrey above him on the list.

The Nobel Peace luareate has been on the Watkins’ list of most powerful and influential spiritual leaders of the world since 2010 and has been listed on the top of the same for majority of the years. The 2019 list also featured other Buddhist personalities such as Vietnamese spiritual guru and author Thich Nhat Hanh, Buddhist nun and author Pema Chödrön, former monk and expert Robert Thurman, in the top 100 Most Spiritually Influential Living People.

The makers of the list proclaimed that the people on the list must have made a unique and spiritual contribution on a global scale, is frequently googled, appears in Nielsen Data, has a Wikipedia page, and is actively talked about throughout the Internet. “Ultimately, this list is meant to celebrate the positive influence of today’s spiritual teachers,” Watkins’ magazine stated.

The octogenarian Tibetan leader has been featured on many prestigious global lists over the years including ‘Fortune’s World’s greatest leaders’ and the ‘Time magazine 100 leaders’ among others. He is also the recipient of over 120 international awards including the Nobel Peace Prize in 1989 and the Congressional Gold Medal in 2007. He is also honorary citizens of several countries and recipient of honorary doctorates and distinguished Professorships from various universities around the globe.

According to the official report, the Watkins bookshop in London has been encouraging spiritual discovery and providing seekers with esoteric knowledge for over 120 years. In 2011, it started publishing the 100 list with the goal of celebrating the world’s living spiritual teachers.