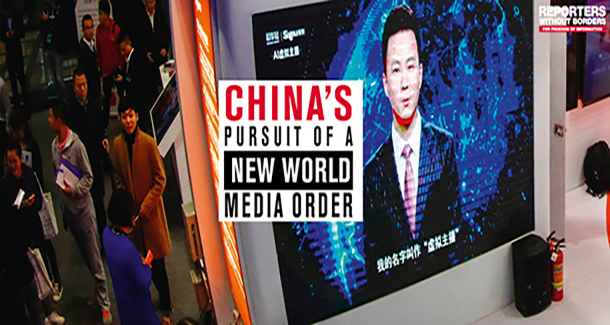 Paris, France — The totalitarian communist regime in China is actively attempting to influence the global media to deter criticism and spread propaganda, according to a new report released by the Paris based global media watchdog "Reporters Without Borders" (RSF) on Monday.

In a report titled "China's Pursuit of a New World Media Order", Reporters Without Borders (RSF) investigates Beijing's strategy to control information beyond its borders, a project that poses a threat to press freedom throughout the world.

China, ranked 176 out of 180 in the 2018 World Press Freedom Index compiled by Reporters Without Borders (RSF), is expanding its hold beyond its borders to impose its "ideologically correct" vocabulary, to deter any criticism of itself and to cover up the darker chapters in its history. Less well known than the Belt and Road Initiative, but just as ambitious, this project poses a threat to press freedom throughout the world.

This is what RSF reveals in its investigative report entitled "China's Pursuit of a New World Media Order", available in French, English and Chinese versions on its website rsf.org. The NGO highlights the strategy deployed by the Chinese state to achieve its goals. These strategies include: modernizing its international TV broadcasting, buying extensive amounts of advertising in international media, infiltrating foreign media... but also employing blackmail, intimidation and harassment on a massive scale.

"In the spirit of the Beijing regime, journalists are not intended to be a counter-power but rather to serve the propaganda of states,” says Christophe Deloire, Secretary General of RSF. “If democracies do not resist, Beijing will impose his view and his propaganda, which is a threat for journalism and democracy”.

Over the past decade, China has invested massively in developing media capable of reaching an international public. And it has succeeded: state-owned CGTN broadcasts TV programmes in 140 countries and China Radio International broadcasts in 65 languages.

The regime has managed to convince tens of thousands of journalists in emerging countries to go on all-expense-paid trips to Beijing to "train their critical mind" in exchange for favorable press coverage. As for the Chinese diaspora media, many of which used to be critical of the regime, almost all have been bought out and disseminated into the propaganda apparatus of the Chinese Communist Party (CCP).

Beijing is also exporting its censorship and surveillance tools, including the Baidu search engine and WeChat instant messaging platform, and encouraging authoritarian states to copy its repressive regulations, a particularly effective strategy in Southeast Asia.

Beijing calls for intimidation and violence to silence dissidents, even in democratic nations. From freelance reporters to major media outlets, from publishing houses to social media platforms, no link in the news production chain is immune to the "invisible hand" of Beijing. Even Chinese ambassadors no longer hesitate to openly denigrate press articles that question the official narrative of China, and often in rather undiplomatic ways. Democracies are struggling to react in the face of these threats.