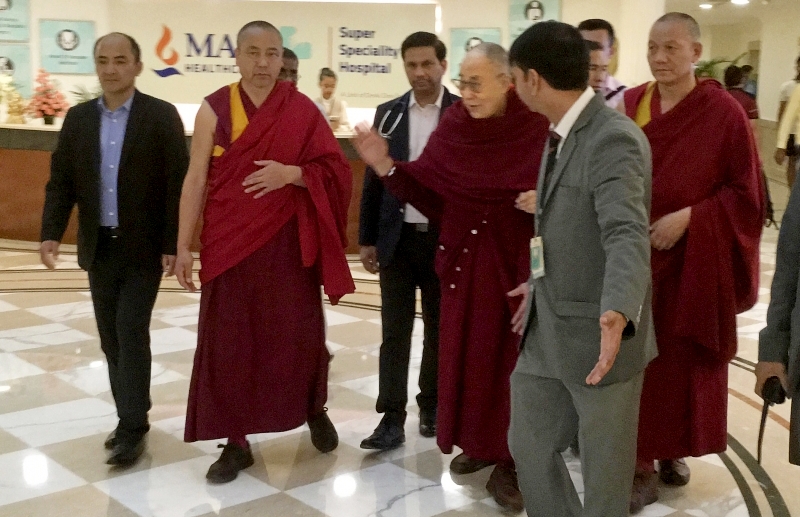 His Holiness the Dalai Lama making his way out from the Max hospital after successfully recovering from a chest infection. Photo: OHHDL

New Delhi, India — His Holiness the Dalai Lama said he feels “Now almost normal” and urged his followers on Friday to feel at ease as he was discharged from the Max Hospital in New Delhi after successfully recovering from a chest infection.

The 83-year-old Tibetan spiritual leader land Nobel Peace Laureate looked strong and spoke cheerfully to members of the press as he walked out of the New Delhi hospital after being discharged.

His Holiness the Dalai Lama had to leave for Delhi on April 9, 2019 from Dharamshala due to a chest infection. The symptoms of the infection were present from the time he was giving the teaching in Bodh Gaya last December but the infection was not diagnosed until this week.

After a thorough medical examination and treatment, His Holiness the Dalai Lama has recovered brilliantly. He had his medication and enough rest at the hospital until this morning. His Holiness is now discharged from the hospital and moved to a Hotel.

His Holiness will have his further medication performed at the Hotel and will be taking rest for a few more days in Delhi. His Holiness assured that he feels almost normal as he leaves the hospital and thanked all the well-wishers across the world for their wishes and prayers for his speedy recovery. “Now almost normal”, His Holiness the Dalai Lama assured.

According to Kasur Dongchung Ngodup, Representative of Bureau of His Holiness, New Delhi. According to him, His Holiness’s health has been restored and he looks refreshed. Addressing the media, His Holiness once again thanked Tibetans inside and outside Tibet for their prayers and wishes which has definitely helped him recover faster.

"I received the necessary medical treatments and now feel kind of normal," the 83-year-old told reporters in a video posted on his official Twitter account as he left the medical facility on Friday morning.

"I have recovered very well. So, everyone, please feel at ease! I wish to thank everyone for your sincere concern and prayers for me," he told members of the press.

News of his hospitalisation prompted an outpouring of support on social media, with tens of thousands of Tibetans and supporters wishing him a speedy recovery. "Concerned that he has been hospitalised," tweeted Naveen Patnaik, chief minister of India's eastern state of Odisha. "The world needs him."

The spiritual leader of Tibet is likely to return this week to the north Indian hill town of Dharmshala, which has been his headquarters since he escaped across the Himalayas to India following the Chinese occupation of his home country. China has occupied Tibet since the invasion of 1950s.

March 2019 comemorations across the Tibetan settlement camps in India marked 60 years of their struggle in exile. When a failed uprising in March 1959 resulted in Chinese troops massacring tens of thousands of Tibetans and He was soon followed by a mass exodus of over 80,000 Tibetans.