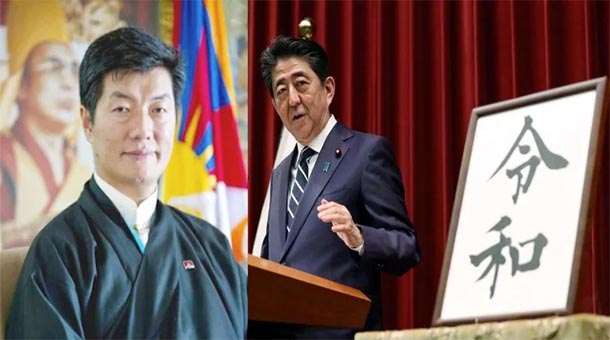 Dharamshala — The President of the Tibetan government-in-exile offered congratulations to Japan’s new Emperor Naruhito on his ascension to the throne, according to the Office of Sikyong, on Thursday (May 2).

Japan's new Emperor Naruhito has formally ascended the Chrysanthemum Throne, a day after his father Akihito abdicated from the world's oldest monarchy and ushered in a new imperial era. Dawn of the Reiwa era: Japan hopes that this will be an era of peace and prosperity for the entire world.

Dr Lobsang Sangay, President of the Central Tibetan Administration sent greetings to Shinzo Abe, the Prime Minister of Japan and the people of Japan on the historic occasion of the enthronement of crown prince His Majesty Naruhito and the ushering of the new imperial era: Reiwa.

The reign of the next Japanese emperor which will be known as the ‘Reiwa‘ era translates as ‘Hope’ in the Tibetan language. The official Japanese translation of Reiwa is ‘beautiful harmony’. “I would like to extend our heartfelt congratulations to the people of Japan today on the historic occasion of the enthronement of crown prince His Majesty Naruhito as the new emperor as it ushers Reiwa era, which coincidently means hope,” the President wrote.

“We express our sincere prayers that Japan, as one of the world’s most leading democratic and economic super power, will strive to continue the path towards achieving enduring world peace and the happiness of the Japanese people as the new emperor takes the rein from His Majesty Akihito who earnestly worked for the cause for more than 30 years.”

“We would also like to take this opportunity to express our profound gratitude to the people and government of Japan for the firmly supporting the resolution of issue of Tibet through dialogue,” he concluded.

Ahead of the coronation of Crown Prince Naruhito, Japan unveiled a new name for the imperial era that begins on 1 May, drawing from an ancient Japanese text. “Like the flowers of the plum tree blooming proudly in spring after the cold winter, we wish the Japanese people to bloom like individual flowers with the (promise of the) future. With such a wish for Japan, we decided upon ‘Reiwa'” said Japanese Prime Minister Shinzo Abe at the unveiling.

The abdication that closed the 30 years of the Heisei era is followed today by the dawn of the new era “Reiwa”, with the accession of His Imperial Highness Crown Prince Naruhito to the throne of the world’s oldest continuous monarchy, as the 126th Emperor. This historic succession to the Imperial Throne from a living Emperor is the first such instance in approximately 200 years.

Prime Minister Shinzo Abe, representing the people at Emperor Akihito’s abdication ceremony, thanked the outgoing emperor for seeking peace and happiness for his people and for reaching out to them in times of difficulty. He said the emperor always shared the people’s happiness and hardship. Akihito’s reign runs through midnight Tuesday, when his son, Crown Prince Naruhito, becomes the new emperor.