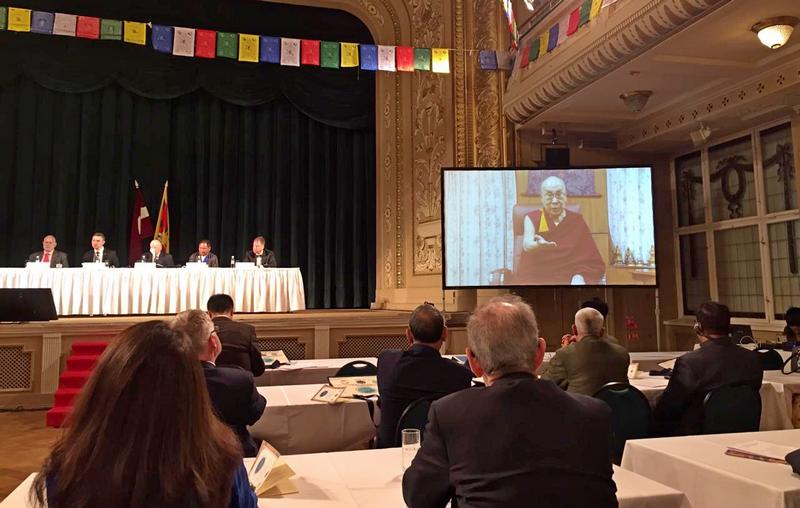 Screening His Holiness the Dalai Lama's special video message to the 7th World Parliamentarians’ Convention on Tibet in Riga, Latvia, May 9, 2019. Photo: TPI

Riga, Latvia — "The struggle of Tibet is very much based on moral principle and thoroughly committed on the nonviolent way, " His Holiness the Dalai Lama said in  a special video message while expressing his gratitude to the Tibet supporters attending the 7th World Parliamentarian Convention on Tibet held in Riga City of Latvia.

The 7th World Parliamentarians’ Convention on Tibet that convenes at Riga, Latvia from 7-10 May attended by some of the prominent figures of Tibet support group including parliamentary leaders and esteemed delegates who will deliberate and engage in ushering global support for Tibet through concerted efforts.

On the first day of the World Parliamentarians’ Convention on Tibet, a special video message from His Holiness the Dalai Lama was featured to the gathering in which His Holiness offered his greetings and gratitude to the friends of Tibet.

His Holiness informed that he always considers the supporters of Tibet as pro-justice more than pro-Tibet as he believes the struggle of Tibet is very much based on moral principle and thoroughly committed on the nonviolent way which has led to many communities including some Chinese to show deep concern for the cause of Tibet.

The Tibetan leader narrated how a friend of his a Chinese ecologist once told him that Tibet is the third pole and that the effect of global warming on Tibetan Plateau is as much as south pole and north pole. His Holiness, therefore, maintains taking care of Tibet’s environment among his top priorities.

His Holiness’ second concern and commitment as he mentioned is to preserve Tibetan language and culture as His Holiness earnestly believes that the Tibetan language is the best form of language to describe and learn about ancient Indian knowledge, psychology and philosophy particularly quantum physics. He further noted that studying Nalanda tradition is not just about the religious matter but rather an academic subject which makes the preservation of Tibetan language all the more important.

The reason why even non-Buddhist countries nowadays including scientists are expressing keen interests in learning ancient Indian Psychology and Philosophy. “Ever since I retired from political responsibilities my main concern and commitment have been this” asserted His Holiness the Dalai Lama.

Addressing the gathering, His Holiness called them the hope and determination of Tibetan people because when the Tibetans fled their country and came into exile they were in a constant battle with dwindling hope, however, their undying moral principles and their just cause attracted many supporters who offered help and rescue as they were intrigued by the positive attitude and resilience of Tibetan people.

Once again His Holiness the Dalai Lama emphasised that Tibet is not seeking for Independence as approach and effort has always been to remain within the domain of the People Republic of China and maintain a harmonious coexistence with the Chinese people. The Chinese constitution mentioned certain rights to be given to the Tibetan people but so far those rights have not been implemented by them.

The spiritual leader of Tibet thus expressed his gratitude and urged the friends of Tibet to render continuous support to Tibet cause and Tibetan people as he noted platforms such as this one and gatherings extremely important and helpful.

His Holiness the 14th Dalai Lama is known throughout the world as a leading advocate for world peace and non-violence. His message is one of kindness and compassion to all sentient beings. Over the past 60 years, he has travelled around the world spreading a message of Peace and Universal Responsibility. He believes that the common aim of all religions, an aim that everyone must try to find, is to foster tolerance, altruism and love. He retired from politics in 2011. But, as one among six million Tibetans, His Holiness said he will continue to serve the cause of Tibet.

In 1959, His Holiness the 14th Dalai Lama along with thousands of others escaped to India, where he was given political asylum. The spiritual leader has reestablished a government and rebuilt monasteries where masters pass on their teachings to young monks. Tibetans in exile have succeeded in gradually rebuilding their monasteries, preserving their culture, restructuring their society and keeping it alive, in spite of the extremely difficult circumstances.