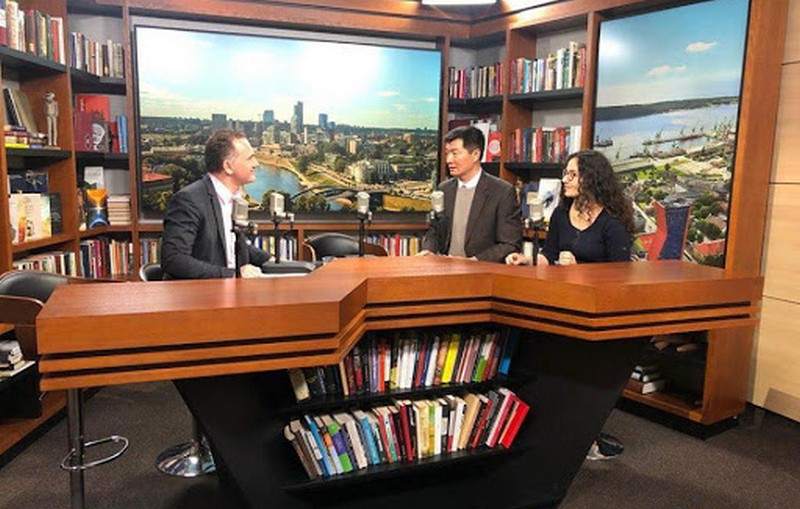 Vilnius, Lithuania— "If you are for freedom, for human rights, for democracy, then you must support Tibet," President of the Tibetan Government in-Exile, Dr Lobsang Sangay told Tibet supporters duing his a week-long visit to the Baltic region, including Latvia. The Tibetan President was on a two-day visit to Vilnius, the capital of Lithuania.

Dr Sangay arrived in Lithuania’s capital city Vilnius late night on Sunday, May 5, 2019 for a week-long visit to the Baltic region, including Latvia. The President was warmly greeted at the Vilnius airport by Sonam Tsering Frasi, Representative of His Holiness the Dalai Lama for the Northern Europe, Poland & the Baltic States; Prof Vytis Vidunas, Director, House of Tibet, along with a core group of long-time Tibet supporters.

Hon Andrius Navickas MP, chair of the Provisional Group for Solidarity with Tibetans in the Seimas, parliament of Lithuania, organised a press conference for President Dr Lobsang Sangay in Seimas on Monday, 6th May 2019, where he was joined by Prof Vytautas Landsbergis, Lithuania’s first head of state after its independence declaration from the Soviet Union, and other MPs.

Drawing parallels between the experiences of the three Baltic states under the then Soviet Union’s communist regime and the Tibet experience, President of the Central Tibetan Administration Dr Sangay called on wider international community and Lithuania in particular to extend support for Tibet.

‘If you are for freedom, for human rights, for democracy, then you must support Tibet’, said Dr Sangay. The President's message resonated with the journalists present, as soon after the press event, media reports about Dr Sangay’s visit and his message started coming in. His visit and the Tibet issue was broadcast on Lithuanian national television on prime time for almost 4 minutes, drawing the expected condemnation from China.

Following his interaction with the Parliamentarians inside Seimas, Hon Laima Andrikiene Member of the European Parliament, hosted a lunch in honour of the Tibetan President. In the evening, the President Dr Sangay was hosted at the Vilnius Institute for Policy Analysis by Prof Šarūnas Liekis, Professor of Politics, where he delivered a talk on Geopolitics of China in Europe: Tibet a case study, according to the Office of Tibet, London.

Earlier in the day, the President gave an interview for the radio station Žinių radijas, where he referred to China’s Belt & Road Initiative and spoke about how Communist China’s one road they built in China cost Tibet its freedom, as this road was used by China to bring in troops and military equipment to crush the resistance.

Prof Dainius Zalimas, President of the Constitutional Court of the Republic of Lithuania, called on the President Sangay at his office, during which the President mentioned to Prof Zalimas about the workings of the Tibetan Supreme Justice Commission(TSJC) and requested that the TSJC be invited to join the gathering of the global constitutional courts.

The President also visited Tibet Square, which was established by friends of Tibet in the popular district of artists and art called Uzupis in 2010. His Holiness the Dalai Lama consecrated the Tibet Square and the ‘Mandala’ sculptural composition in the center of the Square during his visit in 2013.

Dr Sangay then gave two more interviews on the same day, one each for a popular internet and cultural media, before flying to Riga, Latvia to attend the 7th World Parliamentary Convention on Tibet. He is accompanied on this visit by Sonam Tsering Frasi who is the Representative of His Holiness the Dalai Lama for Northern Europe, Poland & the Baltic States.