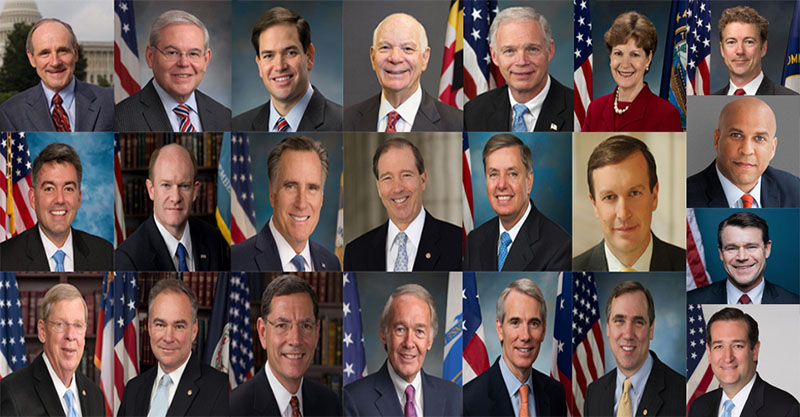 Members of the US Senate Foreign Relations Committee. Photo: TPI

Washington, D.C.— Bipartisan senators called on Mike Pompeo, Secretary of the U.S. Department of State to answer how the U.S. administration can prevent the Chinese communist government's interference in religious freedom and and to convey that religious traditions should not be subject to government encroachment.

A bipartisan group of US senators sent a letter to US Ambassador-at-Large for International Religious Freedom Sam Brownback this week asking “how the US can best support Tibetan Buddhists, to include collaboration with the international community to uphold religious freedom, and to convey that religious traditions should not be subject to government encroachment.”

The letter draws Brownback’s attention to the state of Tibetan Buddhism under Chinese rule by expressing the signatories’ belief “that promoting religious freedom must remain a central pillar of U.S. foreign policy.”

Referring to the issue of the reincarnation process in Tibetan Buddhism, the letter highlights the direct interest the US has in protecting the right of Buddhists to maintain this religious tradition. It says, “While we cannot serve as arbiters of Buddhist belief or rules on reincarnation, we strongly believe that as a matter of safeguarding their religious freedom, the Tibetan Buddhist community and the Dalai Lama must be able to determine reincarnation and succession as a community and without government interference.”

Focusing on the issue of the reincarnation of the Dalai Lama, the senators write, “Action by any government, including the Chinese government, to intervene or select the next Dalai Lama would undermine the legitimacy of a revered Tibetan Buddhist institution and deprive millions of Buddhist practitioners worldwide, including those in the United States, their legitimate spiritual leader and teacher. The United States has a direct interest in protecting the right of Buddhists to religious freedom, and to ensure their religious institutions, like those of all religions, are not undermined and able to operate freely.”

The letter adds, “We urge you to spearhead efforts by the U.S. government and international community ensure the 15th Dalai Lama is chosen according to religious practice, and not subject to governmental interference by Beijing or any other government.”

Welcoming the new congressional letter, Matteo Mecacci, president of the International Campaign for Tibet, said, “This letter comes as Chinese authorities are adopting a more aggressive approach toward controlling the selection, installation and education of reincarnate lamas (including the Dalai Lama), as a means of establishing itself as arbiter of Tibetan Buddhism.

“It is important that the United States, as a democratic country, employ all the tools in its diplomatic toolbox to promote the freedom of religious belief and practice of the Tibetan people, as provided by domestic and international law and by our value system,” Mecacci added.

The letter invites Brownback to share his views on how the US can best support Tibetan religious freedom, including through collaboration with the international community.