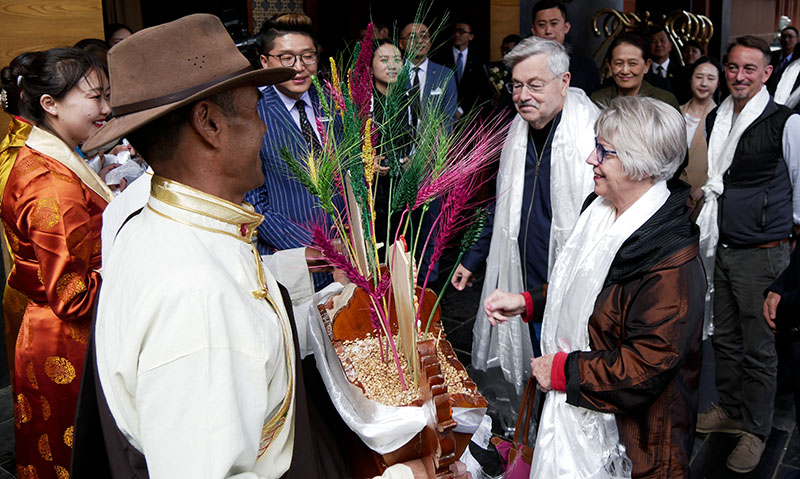 U.S. Ambassador to China Terry Branstadand Mrs Branstad are welcomed to Lhasa, the capital of Tibet, May 21, 2019. Photo: The U.S. Embassy and Consulates in China

Beijing, China — The U.S. ambassador to China urged the Chinese government in Beijing to engage in substantive dialogue with the spiritual leader of Tibet, His Holiness the Dalai Lama during a visit to the Himalayan region.

Terry Branstad also “expressed concerns regarding the Chinese government’s interference in Tibetan Buddhists’ freedom to organize and practice their religion,” the U.S. Embassy said in a statement issued on Saturday.

“He encouraged the Chinese government to engage in substantive dialogue with the Dalai Lama or his representatives, without preconditions, to seek a settlement that resolves differences,” the statement said.

Branstad also raised long-standing concerns about the lack of consistent access to the Tibetan Autonomous Region (TAR). The rare visit to the TAR or Central Tibet and neighboring Qinghai province or Amdo region of eastern Tibet ran from Sunday through Saturday.

Hosted by the so called "Tibet Autonomous Region" government, Branstad was given access to important religious and cultural heritage sites, schools, and “other places of interest,” including the Potala Palace, Jokhang Temple, Norbulingka, and Sera Monastery in the Tibetan capital, Lhasa. He also met with senior Tibetan religious and cultural leaders, the U.S. embassy said in its statement.

In addition to the Central Tibet or TAR, Branstad also visited neighboring Amdo or Qinghai which is a traditionally Tibetan province also known as Amdo and the birthplace of His Holiness the Dalai Lama, spiritual leader of Tibet.

The embassy called the visit “a chance for the Ambassador to engage with local leaders to raise longstanding concerns.” It said Branstad would also “learn first-hand about the region’s unique cultural, religious, and ecological significance.”

Branstad’s trip to Tibet was the first to the region by an American envoy in four years. The rare visit to the Central Tibet or TAR and neighboring traditional province of Tibet Amdo or Qinghai province began May 19 and ended Saturday.

Authoritarian regime in China tightly restricts access to Tibet by foreigners, especially journalists and diplomats. In response to that lack of access, the U.S. Congress last year passed the Reciprocal Access to Tibet Act, which would deny entry to the United States for anyone “substantially involved in the formulation or execution of policies related to access for foreigners to Tibetan areas.”