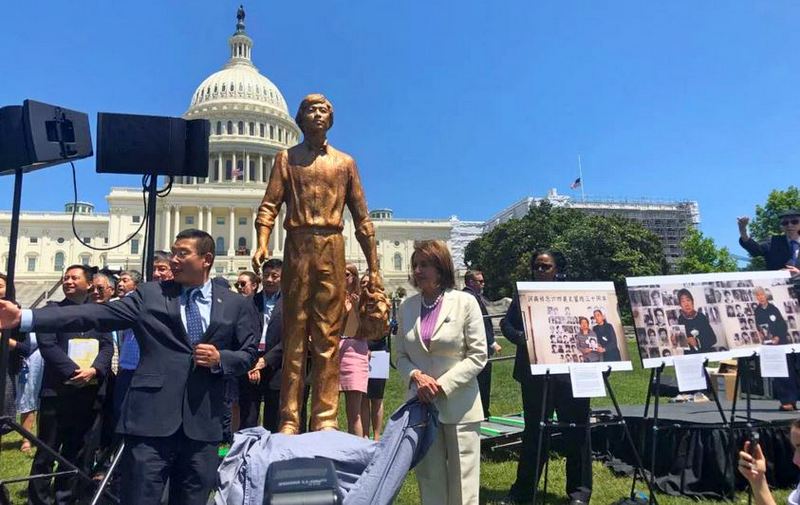 Washington DC — As commemorations for the 30th anniversary of the Tiananmen Square massacre took place all around the world, victims of Communism Memorial Foundation hosted a public rally on the afternoon of 4 June on the West Lawn of the U.S. Capitol in Washington, D.C. on June 4, 2019.

June 4th marked the 30th anniversary of the Tiananmen Square Massacre in which the Chinese Communist Party massacred thousands of innocent student protestors. A record 180,000 people attended a candlelight vigil in Hong Kong for the anniversary.

Victims of Communism Memorial Foundation hosted a public rally on the afternoon of 4 June on the West Lawn of the U.S. Capitol to commemorate the 30th anniversary of the Tiananmen Square Massacre and to highlight the continued oppression of the Chinese people by the Chinese Communist Party.

Calling the June 4th incident as one of the saddest historical events, Gyatso said: “No matter how much power and exertions is used to cover up this matter, It is impossible to make people forget about the truth since many witnessed its occurrence.”

He drew attention on the predicament of the year 1988 and 1989 for Tibet as Tibet too was dealing with sensitive and urgent time as the Beijing government just stated that they were willing to open dialogue with His Holiness the Dalai Lama.

Gyatso further said that His Holiness was also asked to choose the meeting venue and time. That was when His Holiness the Dalai Lama laid down the five-point peace plan and Strasbourg memorandum. These two documents are the basis of the middle way approach.

“Although the situation was so tense for Tibet as well when the June 4th incident occurred in 1989, His Holiness promptly criticized the Chinese government’s suppression of students and showed his support to the students’ peaceful democracy movement”, said Gyatso.

Speaker Nancy Pelosi (D., Calif.) unveiled a statue of the ‘Tank Man’, inspired by the famous photograph of a Chinese civilian blocking a convoy of tanks.

Later, Tenzin Dhetan attended an award ceremony hosted by the US National Endowment for Democracy Foundation during which organisations led by Tibetans, Uighurs and China Aid Association were honoured with Democracy award. Speaker of the US House Hon Nancy Pelosi, Congressman Jim McGovern, Congressman Smith and many more gave remarks.

In April 1989, thousands of pro-democracy students rallied on the streets of Beijing, calling for political and economic reforms and an end to communist-totalitarian government corruption.

Like the massacre in Tibet, the Chinese authoritarian regime has never acknowledged the true events surrounding the Tiananmen massacre. It remains a taboo topic in China, with authorities banning all forms of commemoration inside the country, even today.

That bloodshed night marked not an end of history but a return to an old history, one dominated by dictatorial communist leaders and newly facilitated by 21st century technology. China’s manipulation of information and history, for example, means that few Chinese are aware of the 1989 Tiananmen Square demonstrations or massacre, or 1949 illegal invasion of Tibet, or of today’s internment camps in Eastern Turkistan, where thousands of Uighurs are being held and reeducated.