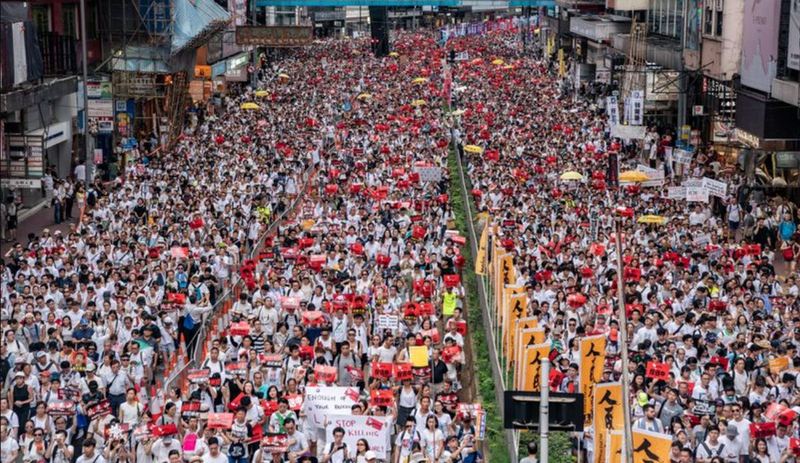 Thousands of protesters march on a street during a rally against a controversial extradition law proposal on June 9, 2019 in Hong Kong. Photo: (Anthony Kwan/Getty Images

Hong Kong — Over a million people have joined a mass protest, which is believed to be the biggest in three decades and second only to a demonstration in 1989 that drew 1.5 million people in support of the Tienanmen Square protests in China, against the extradition law that allows for suspects to be extradited to mainland China to face trial.

Hundreds of thousands of people took to streets in Hong Kong to protest against the proposed "Extradition Bill" that would allow suspects to be extradited to Taiwan, Macau and China to face trial. But the protests are mainly against the extradition to the communist-totalitarian state, which has alarmed the Hong Kong people who have little trust in the Chinese legal system. The system has a conviction rate of 99% when compared to the strong rule of law in the former British colony.

The protest descended into violence in the early hours of Monday as several hundred protesters clashed with a similar number of police outside the city’s parliament. Police used batons and fired pepper spray at protesters, who still managed to close off part of a nearby road. Several people on both sides appeared to be injured, and ambulances were called.

Police estimated the crowd at 240,000, but organizers said more than one million took part in what appeared to be the biggest protest since 2003 protest against a proposed national security law.

Opposition to the proposed bill has united a broad range of the community, from usually pro- establishment business people and lawyers to students, pro-democracy figures and religious groups.

Hong Kong’s chief executive, Carrie Lam, a key target of the rally, said the size of the rally showed there were “clearly still concerns“ over the bill, but the fact so many people took part in the rally showed claims that the rights and freedoms of Hong Kongers, journalists and others were being eroded.

“I think they clearly demonstrate that these rights and freedoms are as robust as ever,” she said. Lam maintained that the widespread opposition to the bill - which included thousands of lawyers and judges - was just because people did not understand it.“This bill is not initiated by the Central People’s government. I have not received any instruction,” she said. Lam refused to withdraw the bill, saying: “Hong Kong has to move on, nobody wants Hong Kong to be a fugitive offenders haven. We are doing it.”

On Monday morning an official Chinese newspaper claimed “foreign forces” were trying to hurt China by creating chaos in Hong Kong. In an editorial on Monday, the China Daily defended the legislation. “Any fair-minded person would deem the amendment bill a legitimate, sensible and reasonable piece of legislation that would strengthen Hong Kong’s rule of law and deliver justice,” it said. “Unfortunately, some Hong Kong residents have been hoodwinked by the opposition camp and their foreign allies into supporting the anti-extradition campaign.”

The publication claimed that some protesters had been misled about the proposed changes, while others were trying to promote a political agenda.

Many critics have argued that the proposed law would legitimize abductions in the city and subject political opponents and activists to China’s widely criticized judicial system. They fear that a pro-Beijing Hong Kong government would not resist requests of a political nature. Numerous world governments, human rights, and legal bodies have expressed concern at the bill.

Reuters reported earlier that several senior Hong Kong judges were worried about the changes, noting a lack of trust in mainland courts as well as the limited nature of extradition hearings. Dozens of people told Reuters it was their first protest march, with some remarking on the strong sense of unity among the diverse crowds.

“I come here to fight,” said a wheelchair-bound, 78-year-old man surnamed Lai, who was among the first to arrive.

Teacher Garry Chiu joined the protest with his wife and 1-year-old daughter, saying: “It is no longer about me.I need to save my daughter. If the law is implemented, anyone can disappear from Hong Kong. No one will get justice in China. We know there are no human rights,” Chiu added . The proposal comes after a 19-year-old Hong Kong man allegedly murdered his 20-year-old pregnant girlfriend while they were holidaying in Taiwan together in February last year.The man fled to Hong Kong and could not be extradited to Taiwan because no extradition treaty exists between the two.

The changes will allow for extradition requests from authorities in mainland China, Taiwan and Macau for suspects accused of criminal wrongdoing such as murder and rape.The requests will then be decided on a case-by-case basis.

The protests are expected to continue till Wednesday when the bill goes before parliament again.