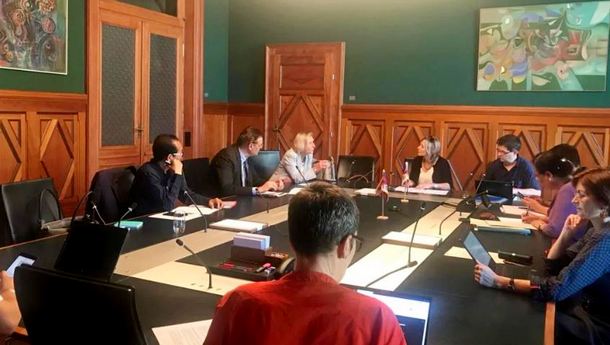 Bern — The Swiss Parliamentary Group for Tibet (SPGT) held its summer session meeting at the parliament building office in Bern on June 17, 2019, Monday afternoon. The meeting is a bi-annual event that gathers members of the SPGT.

The gathering discussed a wide scope of agenda including the "Middle Way Approach" and the "7th World Parliamentarian Convention on Tibet" which recently concluded in Latvia’s capital, Riga, according to the Tibet Bureau in Geneva.

Chhimey Rigzen, Representative of Tibet Bureau in Geneva, expressed gratitude toward the members from the parliamentary group for their strong concern and continued support for Tibet. While recognizing their support for the Middle Way Approach, the Tibetan Representative has briefly spoken about the historical status of independent Tibet and described the significance of initiating concrete endeavors from the parliamentarian group in bringing China into dialogue with envoys of His Holiness the Dalai Lama.

Jampa Tsering Samdho, Europe Member of Tibetan Parliament in Exile, also summarised about the 7th World Parliamentary Convention on Tibet held in Riga a month ago. Highlighting Riga declaration and action plan adopted during the 7th WPCT in Riga, Tsering emphasised some of the key actions plans that could be implemented by the members of the group in the next month.

Thomas Buchli President of the Swiss-Tibetan Friendship Association (STFA) and Lhawang Ngorkhangsar, Vice-President of the STFA, also attended the meeting. Buchli who is also Secretary of the SPGT reviewed the last year meeting minutes and presented proposed interpellations for the ongoing summer session of the Swiss parliament. The summer session started on June 3, will include on June 21. The 2nd meeting of the parliamentarian group for Tibet is scheduled to be held in December 2019.

To commemorate the 60th anniversary of the Tibetan National Uprising Day, the Parliamentary group pledges to continue their efforts to support for Tibet and renew their commitment in solidarity with the Tibetan people in their struggle for freedom.

A delegation of the SPGT, led by Member of Swiss parliament and former speaker Maya Graf, MP Barbara Gysi and Thomas Buchli, President of Swiss Tibet Friendship Association, visited Dharamshala, India, in March 2017. They delivered a three-point statement of support for the nonviolent Tibetan resilience against Chinese regime at a press conference.