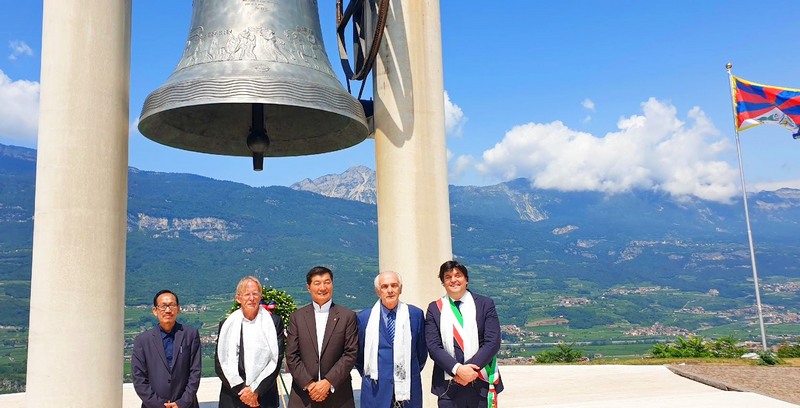 Rovereto — In the presence of Tibetan President Dr Lobsang Sangay as the Chief Guest, the City of Rovereto, Italy, hoisted the National flag of Tibet at the Bell of Peace, on July 12, 2019, to honor Tibet's peaceful and non-violent struggle for freedom from the Chinese totalitarian regime.

Despite the communist-authoritarian regime in China has made possessing the national flag of Tibet illegal in Tibet, it will permanently stand along with other 195 national flags at at the Peace Bell in Rovereto, Italy.

In the presence of the President of the Tibetan government in-Exile, now officially known as the Central Tibetan Administration (CTA), the bell of peace struck at the Campana Dei Caduti, Rovereto, Italy, in honour of the Tibetan people's peaceful and non-violent struggle for genuine autonomy within the constitutional framework of the People's Republic of China.

The national flag of Tibet, a familiar site on protests outside of Tibet and China, is illegal in Tibet and China. Tibetans living inside Tibet have been heavily imprisoned over possessing for owning, waving or flying or even making a drawing of their national flag as it has become a symbol of protest and unity for Tibetans.

The Tibetan President Dr Lobsang Sangay joined Regent Senator Alberto Robol, Mayor Francesca Valduga and Roberto Pintor, Tibet supporter in the official ceremony, according to the Tibet Bureau, Geneva. Upon his arrival in Bolzano on Friday morning, the Tibetan President and his delegation were warmly received by Khando and Dekyi Dolkar from the Trento Tibetan community and Roberto Pinter, former Vice President of Trento Province.

It was an emotional moment for Tibetans as the magnificent multi-colored flag unfurled in the backdrop of mountains that resembled the enigmatic mountains back home in Tibet. The Tibetan national anthem was also sung during the public event with the Tibetan president.

While addressing the gathering at the bell of peace, the President heavily criticised the authoritarian Chinese regime for its failed policies in Tibet by saying, “sustainable peace, then the process and the efforts should also be peaceful. So that’s why our efforts have been peaceful. We are sending message to the Chinese government that what we want is peace, what we want is genuine autonomy within the framework of the Chinese constitution.”

The President also elaborated on the difference between Trento and Tibet in terms of autonomy in true sense. He said 'Trento is an autonomous region; however, in contrast, Tibet’s autonomous region is only on paper and not in reality! But Chinese leaders always say Tibetan people enjoy autonomy, I think if what they say is true, and they should come to Trento to see how actually autonomy is practiced.'

“We commend the province of Trento for taking a very courageous and political step by permanently hoisting the Tibetan flag – something that is a crime back in Tibet,” President Dr Sangay said, adding: "I will bring your love and wishes to His Holiness the Dalai Lama and also say that if Trento can do it, so can Tibet!”.

Tibetans and Tibet supporters across the world took to social media platforms to express their gratitude for the host country, and hope for a free autonomous region for Tibet.

The Tibetan government in-Exile media (tibet.net) reported about the event saying "History made as the Tibetan national flag unfurled in Italy."

"For the first time in history of our life in exile, we initiated, collaborated and then witnessed a visible (neither symbolic nor sympathetic) support for Tibetan peaceful movement through a courageous action from some freedom loving people of Autonomous province of Trento," said Dekyi Dolkar, international human rights law expert in Geneva who was there to coordinate the official ceremony for Tibet. On behalf of Tibetan people and all the peaceful movements around the world, Dolkar expressed her gratitude to everyone for their collaborations and making it happen with grace and altruism.

"Tibetan Flag has been hoisted permanently and unquestionably among over hundred nations and institutions seeking for sustainable peace at Bell of Peace in Rovereto. Cast with the bronze of the cannons of all the nations participating in World War I, it is the largest bell in the world to sound at full peal. Every evening at dusk, it’s 100 tolls are a testimony of world peace. Today, 1 toll of Bell “Maria Dolens” was dedicated to Tibet and her right to peace. In 2001, His Holiness the Dalai Lama visited the bell under the kind invitation of Roberto Pinter, Former Vice President of Trento Autonomous province,' she added in a statement.

"We indeed have worked together with dedication since last summer for applying in time, translating documents, communicating, lobbying, explaining and getting it signed officially from Tibet Bureau Office in Geneva. It is our honor to organise and be part of this historic day of celebration that is sending a message of hope and solidarity for Tibet and Tibetan people," she further added.

"Tibet will never die and Tibet will rise again in this world, no matter how many Tibetan people were killed by Chinese and they will rebirth," Tenzin Khangsar wrote on her facebook.

"A bell to wake up all hypocrites and stand up for the truth and take action on the Tibetan struggle. The roof of the world is in the hands of bloody communist China. If you want to save the world, first save Tibet," Dasang wrote.

"May we soon get the good news of our National Flag flying on the top of Palace again. Thank you all for all the support for our nation cause," Migmar Zomkey wrote.

"This event makes my eyes wet, tears of joys and sorrow. Tibet will be free and this flag will stand in Lhasa till the last man standing," Tenzing Jimba wrote on his facebook.

The spiritual leader of Tibet, His Holiness the 14th Dalai Lama visited the Bell of Peace back in 2001, a visit that is still warmly remembered by many of the locals.