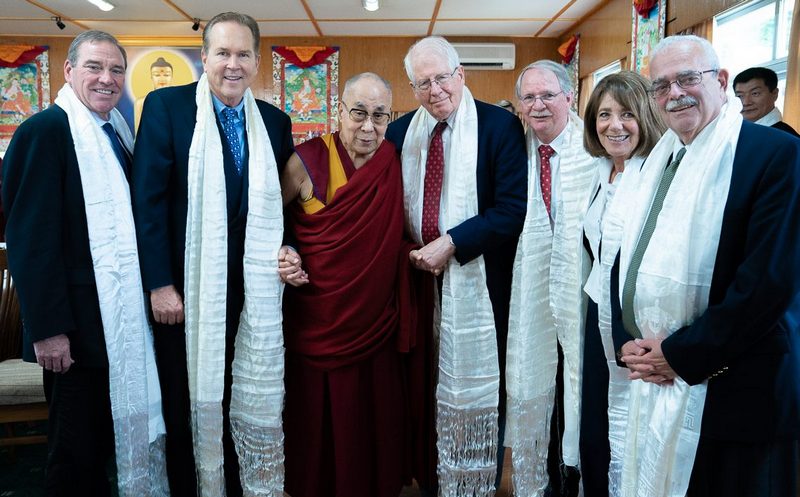 A bipartisan U.S Congressional delegation during their meeting with His Holiness the Dalai Lama at his residence in Dharamshala, HP, India on August 3, 2019. Photo: Tenzin Choejor

Dharamshala, India — 'I think America is a strong supporter of Tibet' His Holiness the Dalai Lama said during his meeting with six members of the House Democracy Partnership, a bipartisan commission of the US House of Representatives, at his residence in Dharamsala, HP, India, August 3, 2019.

“I think America is a strong supporter of Tibet. Our hope also entirely and mainly depends on America’s support. Then, in 1973 I visited Europe and then in 1979 in America. So I felt strong support, not just for political reason, but for moral principles,” the spiritual leader of Tibet told The members of the bipartisan congressional delegation.

On the relationship between Tibet and the U.S., His Holiness said that “there were a number of people who know about Tibet and they support Tibet. They also have a very warm feeling toward Tibet. Since then America become the main supporter of Tibet and now today, members from both houses and parties, also US Ambassador to Delhi came here and you are most welcome.”

“This place is my home, around since after 1959, I have spent one year in Mussoorie and then came to Dharamshala. The Government of India has arranged all these things. So I have been living here for over sixty years. Therefore, I want to welcome you all to my home,” His Holiness added.

The US Congressman David Price raised His Holiness the Dalai Lama for his teachings all over the world. “Freedom for you to teach and relate to of-course the Tibetan community, But, to people all over the world and you have so much to offer and we should all value that freedom.”

David Price then handed over a letter from Nancy Pelosi is the Speaker of the House of Representatives. He said, “you have mentioned our Speaker Nancy Pelosi; I want to first to bring you greetings from her and to give a letter which just expressing her esteem.”

His Holiness responded as saying, “she visited China, meantime in Tibet.  After that, she helped your visit?” “Yes, after she has arranged our visit to Tibet,” David Price replied.

"One of my beliefs, source of inner strength and source of peace, I consider myself one of the human beings and all the seven billion human beings, mentally, emotionally and physically— we are the same. We all want a happy life,” said His Holiness the Dalai Lama, describing himself as a simple Buddhist monk.

“As I already mentioned basic human nature is more positive. So now, I have a critical view of the existing education system, which very much oriented about material values. We should include in education how to bring inner peace, without touching religious faith, but secular way,” His Holiness said, adding: “That is my commitment”.

“To think about these things and to be stimulated to think about what really motivates us and what we believe in that so I thank you for that and be happy to turn my friend and Co-chair HDP, Congressman Vern Buchanan of Florida,” David Price responded.

“Thank you, Your Holiness, Chairman put it very well. We are six members of the Congress; we want to quickly just add. We want to continue to build our friendship and our partnership is going forward. I would like to get your thoughts at some point what more we can do and I did want to touch on you mentioned about and you talked a lot of different things,” Congressman Vern Buchanan said.

“Its child welfare, it all starts there, in my mind, there’s a saying that goes: I went to boys and girls clubs. Children make up 25% of the population in the U.S. but a 100% of the future, so I appreciate you weighing in on all the other points that you made your inspirational and leadership, is incredible. I just can’t imagine anybody else on the planet that adds more to the conversation than what you do,” Buchanan added.

“So I can tell you when this came up as an opportunity to be with you and the Tibetan people in your presence. David and I thought about it for about 30 seconds, we really feel special to being in your presence to have this opportunity and know that we are going to continue to build friendship and like to get your thoughts when you can about how we can take it to another level,” he further added.