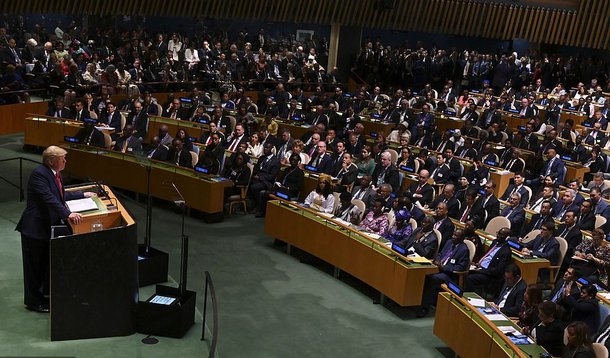 US president Donald Trump called on nations around the globe to embrace democracy and reject totalitarian communism, saying We want and support religious liberty for all. Photo: Getty Images

President Trump cited Venezuela as an example of the failures of socialism, describing embattled President Nicolás Maduro as a "Cuban puppet."

“I have the privilege of addressing you today as the elected leader of a nation that prizes liberty, independence, and self-government above all. The United States, after having spent over two and a half-trillion dollars since my election to completely rebuild our great military, is also by far the world's most powerful nation.”

"The United States is now taking that decisive action to end this grave economic injustice. Our goal is simple. We want a balanced trade that is both fair and reciprocal. We have worked closely with our partners in Mexico and Canada to replace NAFTA with the brand new and hopefully bipartisan U.S.-Mexico-Canada agreement."

"To confront these unfair practices, I placed massive tariffs on more than $500 billion worth of Chinese-made goods. Already, as a result of these tariffs, supply chains are relocating back to America and to other nations, and billions of dollars are being paid to our treasury. The American people are absolutely committed to restoring balance to our relationship with China. Hopefully, we can reach an agreement that will be beneficial for both countries. But as I have made very clear, I will not accept a bad deal for the American people."

"As we endeavor to stabilize our relationship, we're also carefully monitoring the situation in Hong Kong. The world fully expects that the Chinese government will honor its binding treaty made with the British and registered with the United Nations in which China commits to protecting Hong Kong's freedom, legal system and democratic ways of life. How China chooses to handle the situation will say a great deal about its role in the world in the future. We are all counting on President Xi as a great leader."

"To the Venezuelans trapped in this nightmare, please know that all of America is united behind you. The United States has vast quantities of humanitarian aid ready and waiting to be delivered. We're watching the Venezuela situation very closely. We await the day when democracy will be restored when Venezuela will be free, and when liberty will prevail throughout this hemisphere.

"As we defend American values, we affirm the right of all people to live in dignity. For this reason, my administration is working with other nations to stop criminalizing homosexuality and we stand in solidarity with LGBTQ people who live in countries that punish, jail or execute individuals based upon sexual orientation.

Guided by these principles, my administration launched women's global development and prosperity initiatives. The WGDP is the first-ever government-wide approach to women's economic empowerment working to ensure that women, all over the planet, have the legal right to own and inherit property, work in the same industries as men, travel freely and access credit and institutions. Yesterday I was also pleased to host leaders for a discussion about an ironclad American commitment protecting religious leaders, and also protecting religious freedom."

"This fundamental right is under growing threat around the world. Hard to believe, but 80 percent of the world's population lives in countries where religious liberty is in significant danger or even completely outlawed. Americans will never fire or tire in our effort to defend and promote freedom of worship and religion. We want and support religious liberty for all. Americans will also never tire of defending innocent life.

We are aware that many United Nations projects have attempted to assert a global right to taxpayer-funded abortion on demand right up until the moment of delivery. Global bureaucrats have absolutely no business attacking the sovereignty of nations that wish to protect innocent life. Like many nations here today, we in America believe that every child born and unborn is a sacred gift from God."

"There is no circumstance under which the United States will allow international interests to trample on the rights of our citizens, including the right to self-defense. That is why this year I announced that we will never ratify the U.N. Arms Trade Treaty, which would threaten the liberties of law-abiding American citizens. The United States will always uphold our constitutional right to keep and bear arms. We will always uphold our Second Amendment.

"The core rights and values America defends today were inscribed in America's founding documents. Our nation's founders understood that there will always be those who believe they are entitled to wield power and control over others. Tyranny advances under many names and many theories, but it always comes down to the desire for domination. It protects not the interests of many, but the privilege of few. Our founders gave us a system designed to restrain this dangerous impulse. They choose to entrust American power to those most invested in the fate of our nation: a proud and fiercely independent people."

"Tyranny advances under many names and many theories, but it always comes down to the desire for domination. It protects not the interests of many, but the privilege of few. Our founders gave us a system designed to restrain this dangerous impulse. They chose to entrust American power to those most invested in the fate of our nation, a proud and fiercely independent people. The true good of the nation can only be pursued by those who love it, by citizens who are rooted in its history, who are nourished by its culture, committed to its values, attached to its people and who know that the future is theirs to build or theirs to lose.

"Patriots see a nation and its destiny in ways no one else can. Liberty is only preserved, the sovereign is only secured, democracy is only sustained, greatness is only realized by the will and devotion of patriots. In their spirit it is found the strength to resist oppression, the inspiration to forge legacy, the goodwill to seek friendship and the bravery to reach for peace. Love of our nations makes the world better for all nations. So, to all the leaders here today join us in the most fulfilling mission a person could have. The most profound contribution anyone can make--lift up your nations, cherish your culture, honor your histories, treasure your citizens. Make your countries strong and prosperous and righteous. Honor the dignity of your people and nothing will be outside of your reach.

When our nations are greater the future will be brighter, our people be happier and our partnerships will be stronger. With God's help, together we will cast off the enemies of liberty and overcome the oppressors of dignity. We will set new standards of living and reach new heights of human achievement. We will rediscover all truths, unravel all mysteries and make thrilling new breakthroughs. And we will find more beautiful friendship and more harmony among nations than ever before."

Communist dictator Mao Zedong, the founder of the People's Republic of China, qualifies as the greatest mass murderer in world history from 1959 to 1961, when the totalitarian regime in China was facing a famine, the systematic torture, brutality, starvation killed millions of Chinese, Tibetans, Eastern Turkistan, and Mongolian people. At least 45 million including 1.2 million Tibetans were starved or beaten to death under the dictator Mao's watch over these 10 years; the worldwide death toll of the Second World War was 55 million.