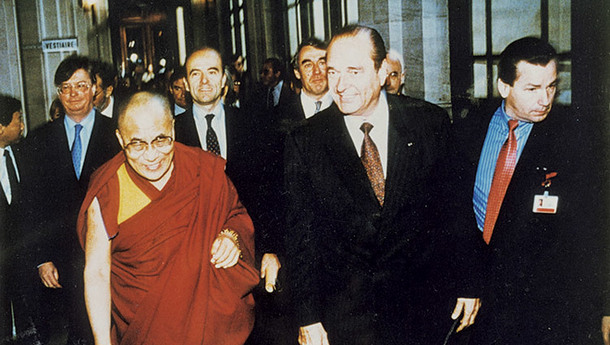 Dharamshala, India — In a letter to Madame Bernadette Chirac, His Holiness the Dalai Lama expresses his condolence for the death of former French President Jacques Chirac, who passed away in his home in Paris on September 26, 2019, at the age of 86.

Offering his condolences on the death of her husband former French President Jacques Chirac, His Holiness the Dalai Lama wrote: “I had the privilege of knowing Monsieur Chirac ever since he was elected Mayor of Paris."

"I counted him among the friends of the Tibetan people. When he was President of France, I admired the way he cultivated close cooperation with Germany, which served to strengthen the European Union. I have a dream that similar visionary political projects will spread to Africa, Latin America and Asia.”

“His dedication in championing the integration of the European Union will be remembered with respect,” said His Holiness.

French President Jacques Chirac ignored totalitarian communist China's demands that he cancel his meeting with His Holiness the Dalai Lama, bravely having lunch with the spiritual leader of Tibet on Tuesday, December 8, 1998, at the Elysee Palace in Paris, the capital of France.

Most international media outlets have reported that France has sought to avoid friction with China in an effort to expand commercial ties. President Chirac defended his hospitality to His Holiness the Dalai Lama but also affirmed that Tibet should remain part of China.

The exiled Tibetan spiritual leader's visit to Paris, to participate in the 50th-anniversary celebration of the Universal Declaration of Human Rights, was "natural," the French government said. Earlier Tuesday, Chinese authorities in Beijing pressed Chirac to drop his lunch plans with the 1989 Nobel Peace Prize Laureate winner, one of a group of Nobel laureates invited to meet President Chirac.

Chirac who was President of France from 1995 to 2007, and Prime Minister from 1974-76 and 1986-88 - died on Thursday September 26, aged 86. Monday, September 30 will be a day of national mourning, and a service to honour Chirac will be held in the Saint-Sulpice church in Paris at midday, the Élysée Palace has reportedly confirmed.

In a statement on Thursday, Macron said: “We have lost a great statesman, who loved us as much as we loved him. Jacques Chirac was a great Frenchman, and did so much for our nation and our values.”

Macron also sent his “friendship, respect and condolences” to Chirac’s widow, Bernadette Chirac, and other family members. The Élysée Palace will also be open to the public until Sunday, with a condolences collection available in the lobby for anyone who wishes to pay their respects.

Chirac is popular in the French collective memory, with a new poll from Odoxa-Dentsu Consulting finding that 79% of the public believe he was “a good president”. Nine in 10 people said he appeared “kind”, and similar numbers agreed that he was “charismatic (83%)”, dynamic (75%), and represented France (87%).

Politically, Chirac is remembered as being one of the only European leaders to come out strongly against the Iraq war during the George W. Bush era in the United States. He was also the country’s first leader to apologise publicly and extensively for the extent of the French collaboration with the Nazis and the deportation of Jews during World War II.

Indeed, the same poll found that the public most respects and remembers Chirac for his opposition to the Iraq war (63%), his ending of obligatory military service (37%), his second election campaign against Jean-Marie Le Pen in 2002 (30%), and his recognition of the extent of the French Nazi collaboration (25%).

In his later years, Chirac became a somewhat-unlikely “cool icon” among young people, with many seeing him as part of the nostalgia for the 1970s and 80s, and appreciating him for his style and charisma. This was known as “chicimania”, after Chirac’s tongue-in-cheek nickname, “Chi chi” - and T-shirts and other merchandise bearing his face sold famously well.