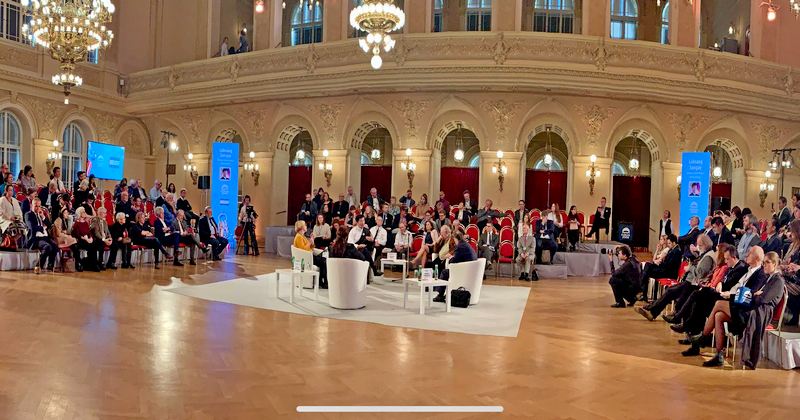 Prague — The Sikyong (President) of the Tibetan-government-in-exile, officially known as the Central Tibetan Administration (CTA) participated in this year's just-concluded Forum 2000 Conference in the Czech Republic.

At the forum, which was focused on Havel’s thought on responsibility and it as a gauge of morality, into the political space, Dr Sangay shared that the importance of a modern education inclusive of moral and ethical learning in countering the challenges of the world today.

President Dr Sangay highlighted the importance of accountability together with responsibility in political roles at the 23rd Forum 2000 in Prague yesterday evening, according to the Sikyong Office.

Dr Lobsang Sangay was participating in a panel discussion at the ongoing 23rd Forum 2000 at the Zofin Palace, Prague. The panel that included Vesna Pusic, Former Croatian Minister of Foreign Affairs, Haykuhi Harutyunyan, President of Protection of Rights without Borders, and Adam Michnik, Editor-in-Chief of the Gazeta Wyborcza along with Dr Sangay deliberated on the former Czech President Havel’s notion of responsibility and how it weighs in the political space where the world is witnessing democracies in retreat.

As the panelists deliberated on how to bring Havel’s thought on responsibility and it as a gauge of morality, into the political space, President Dr Sangay shared the concept of Professional politician, where a politician over time becomes a professional politician and thus overriding their responsibility and moral obligation of their position. The President further suggested term limit in effectively curbing that transition and mania for power.

The panel also discussed the trend of politicians being more concerned about their party and its goals rather than towards their responsibilities. It further deliberated on the roles of individuals, civil education and to figure the entitlements of the citizen in their system.

President Dr Sangay also shared the importance of a modern education inclusive of moral and ethical learning in countering the challenges of the world arc bending towards a system of exclusion and moving away from a system of inclusion, while exemplifying SEEL learning and His Holiness’s initiative and thoughts on Universal Responsibility.

The Panel concluded with a discussion on the importance of education inclusive of moral and ethical learning, the need to transcend the perspective of us and them and the suggestion of term limit as the three lessons or take away from the discussion in regards to the moral dilemma in the political space and world at large.

On the same day, the President attended a meeting hosted by Senate Vice-President Jiří Oberfalzer and Senator Premysl Rabas with Czech Parliamentary Group for Tibet, and Council of the city of Prague members. The President also participated in panel discussions on China: Human Rights in the 21st Century Digital Surveillance State.

The president who was on a three-day visit to Prague spoke on ‘Responsibility as the Ultimate Measure of Human Action at the Zofin Palace Forum Hall Sunday evening. The panel discussed Former Czech President Vaclav Havel’s notion of human responsibility and its relativity to today’s world where democracies and the spirit of freedom are put to the test. Vesna Pusic, Former Croatian Minister of Foreign Affairs, Haykuhi Harutyunyan, President of Protection of Rights without Borders, and Adam Michnik, Editor-in-Chief of the Gazeta Wyborcza have joined President Sangay in the panel discussion.

Held in Prague October, 13-15, the Forum 2000 Conference was established in 1996 as a joint initiative of the late Czech President Václav Havel, Japanese philanthropist Yohei Sasakawa and Nobel Peace Prize Laureate Elie Wiesel, with the aim of mapping the progress of globalization and supporting democracy. Main events this year include debates, projections, concerts, exhibitions, and others.