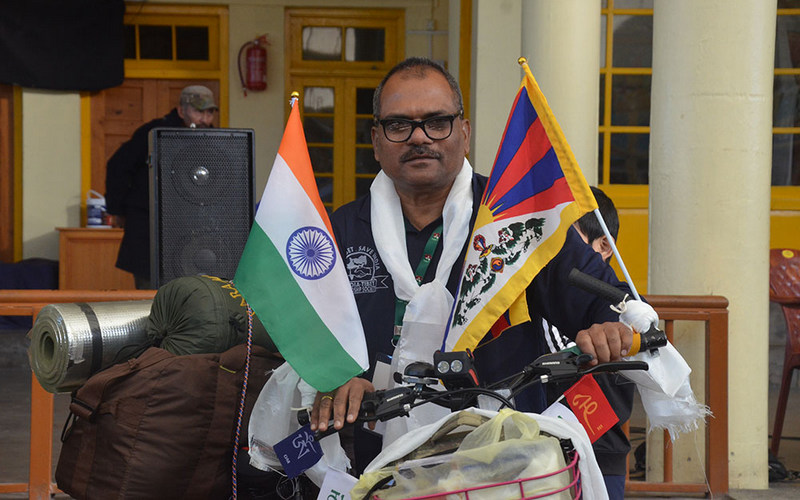 Sandesh Meshram starting his bicycle rally for Free Tibet and Save India in Dharamshala, India, on December 1, 2019 till 10th March 2020. Photo: TPI/Yangchen

Dharamshala, India — Sandesh Meshram, a regional convener of western region-I (Maharashtra & Goa) which is a core group for Tibetan cause-India. He will be campaigning for his bicycle rally entitled FOURTH JANJAGARAN CYCLE YATRA with the core message of FREE TIBET, SAVE INDIA.

Sandesh Meshram, the member of Indo-Tibet friendship society, will start his more than four-month-long bicycle rally from the Dalai Lama’s main temple on 1st December of 2019 till 10th March 2020. The occasion for the start of the campaign will be marked by the presence of Dr Kuldip Chand Agnihotri, the vice-chancellor of the Central University of Himachal Pradesh, Ajay Singh Mankotia, the president of Dharamshala, Indo-Tibet friendship Association and Choekyong Wangchuk, minister of health, Central Tibetan Administration. He will take off with traditional ceremonial scarves from the respective representatives and his well-wishers.

Sandesh’s fourth voluntary bicycle rally will cover over approximately around 7,500kms passing through 12 states of India beginning from Mcleod Ganj, Dharamshala of Himachal Pradesh, the official seat of Central Tibetan Administration and the residence of His Holiness the 14th Dalai Lama and will end at Mundgod, one of the largest Tibetan settlements in Karnataka.

The free-Tibet campaigner previously had organized three such cycle Yatras. The first voluntary bicycle rally took place in 2014 with the core message of Save Tibet Cycle Campaign started from Nagpur and covered over a distance of 4,000kms, crossing through five states including Madhya Pradesh, Chhattisgarh, Odisha, Andhra Pradesh, and Telangana.

Followed by his second cycle yatra in 2016 with a slogan of Bicycle Rally to Save Tibet which began at Nagpur, traveling through the states of Madhya Pradesh, Uttar Pradesh and ended in Bodh Gaya, Bihar covering over 1,200kms in total.

The third bicycle rally was in 2017 on 20th October to mark the Sino-Indian war, started from Bodh Gaya to Nathu-La Pass, Sikkim covering over 1,270kms.

The bicycle yatra aims to create awareness among the general Indian masses about Tibet and its hard realities prevailing under the brutal occupation of Tibet by the Communist Government of China.

This cycle campaign would also engage in re-strengthening the centuries-old relation between India and Tibet. The boundaries that India shares with Tibet, not China.

China and Tibet: Few facts everyone should know